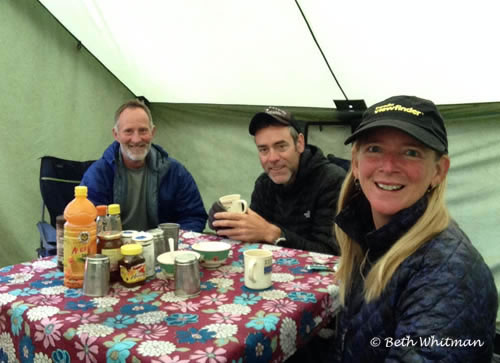 I’ve been getting asked a lot about what we ate during the Snowman Trek.

Before we left for Bhutan, we talked to a lot of people and read many articles about how to best stay nourished during a 25-day trek at altitude. Trekking aside, the Bhutanese don’t exactly have access to a wide array of food. It’s expensive to import and and they are able to subsist just fine off of the food they grow themselves.

That might be great for the Bhutanese but I knew I’d need something more.

I had been training for the trek for a year and had gotten used to eating a large quantity of vegetarian protein each day (120 grams). I knew it would be difficult for my body to adjust to something completely different, particularly while pushing myself so hard, and I really wanted to be at my best every day.

Therefore, I arranged with our tour operator in Bhutan to make sure we had plenty of food items (particularly ones high in protein) that would appeal to a Western taste – oatmeal, eggs, peanut butter, potatoes, rice and fresh veggies (when possible).

But we also carried a lot of supplemental food to make sure we were not only getting enough protein but also enough calories to sustain what, on some days, would be us burning as many 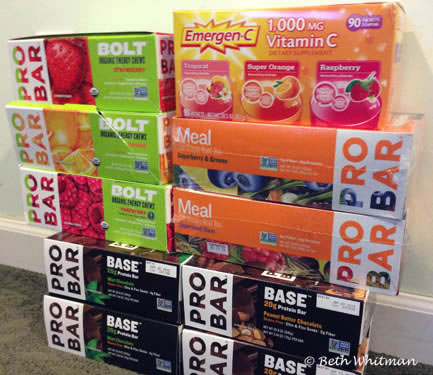 Each day we were led by our guide, Tobgay, and two helpers, both named Sherub Dorji. The Sherubs would carry our lunch and tea for us. While Tobgay led the way, one Sherub would stay in the middle of the group and another would always stay in the back, which meant behind me because I was always the slowest!

So, what was a typical day of eating like?

Breakfast – Tobgay and our cook, Tippy, would check in with us the night before to find out our preferences for breakfast. Given where we were, we actually had more variety than you might think. For me, breakfast usually consisted of meusli or porridge (which I quickly got tired of eating because this porridge was NOT like my slow cooked oats at home) and toast with peanut butter or Justin’s Almond Butter (which I brought with me).

Eggs, either scrambled or as an omelette, were always available. But being a vegan-leaning vegetarian, I also got tired of scrambled eggs after a week or so. But, more than half way through the trek, we discovered the cooks had been holding out on us and we were given a 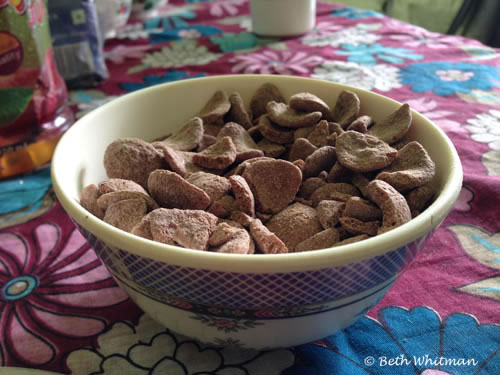 Coco Puff-equivalent cereal. I sometimes ate these and usually had them without milk because I appreciated having something to crunch on.

Snacks – Before leaving camp, usually around 8 or 8:30, I would eat a package of either CLIF Shot Bloks or Probar Bolt energy chews. These 200 calorie snacks gave me a carb/sugar rush so I could start the day on high energy.

A couple of hours later, we would stop for either a juice break and have a sugary juicebox drink or we would have hot tea and crackers or cookies. I would usually skip the cookies so that I wasn’t consuming so much sugar and have a protein bar instead. I brought Probar Base bars, Premier Protein bars and CLIF Builder bars. I actually left my favorite protein bars, Pure Protein, at home because I suspected that I would get sick of them after 25 days and I didn’t want that to happen.

Lunch – We would stop for lunch sometime between 12:30 and 1:30 unless we were so close to camp that we could push on and have lunch there. Usually we would have reached a pass, 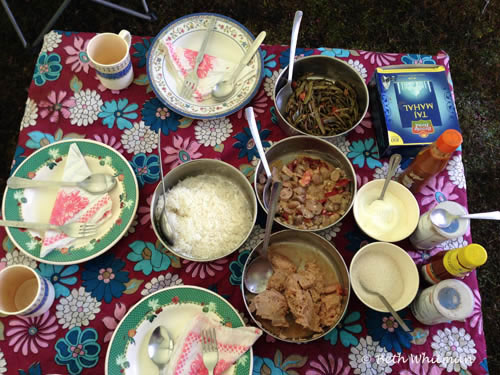 spent a bit of time taking photos and then descended until we found a flat spot with no wind where we could set up our picnic.

Lunch always included rice and then a variety of cooked vegetables such as cauliflower, greens and canned mushrooms. Always canned mushrooms! We would usually also have Bhutan’s national dish, ema datse (spicy chili and cheese).

Snack – Once we arrived at camp, tea and more snacks were awaiting us. This was usually cookies or crackers. Toward the end of the trek we were delighted to have popcorn (my fave!), roasted peanuts or cashews and Choco Pies. Those Choco Pies? If no one was around, I’m sure I could have eaten four of them in one sitting. But I restrained myself.

Once we had a chance to rest in our tent and regroup a bit, we’d head to the dining tent for dinner. Often we would meet early and have our own version of Happy Hour consisting of tea, hot chocolate or, for the guys, K5, the local whiskey. We’d play cards or Bananagrams to pass the time before dinner was served around 7pm.

Dinner – Each night we’d be served soup. This was always welcomed because by late afternoon, temps would start dropping and we’d be freezing. The main course was often more of the same as lunch – rice and veggies. Sometimes there would be a meat served. Dessert was fruit cocktail, jalebi (a VERY sweet Indian dessert) or a fresh fruit such as apples, if they were available in the area.

Sometimes one of us would surprise the group with chocolate that we had purchased in Thimphu before the trek. Or sometimes we’d go back to the tent and enjoy our chocolate in private. 🙂

There were also times when I’d need protein and would snack on my bars in the late afternoon or after dinner.

While I never had a scale to weigh myself before or after the trek, I would guess that I lost six or seven pounds. That’s actually less than I had expected given how much daily exercise we got, but I wasn’t there to lose weight. Plus, I gained it all right back once we hit Bangkok and we discovered a great pizza place!

Even though it was 25 days, it was not a bad food experience at all, particularly because we had some of our own snacks to supplement those canned mushrooms. 🙂