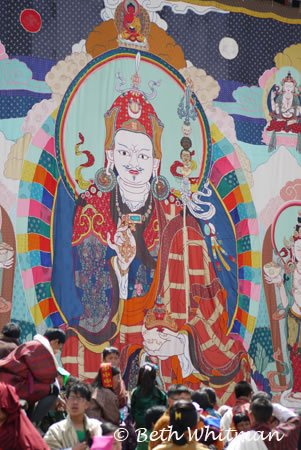 Guru Rinpoche (aka Padmasambhava) is revered in Bhutan as the one to have brought Buddhism to this tiny Kingdom in the 8th century. His image can be found painted on dzongs (temples) and cast in metal, adorning altars everywhere. He’s also featured on this large thongdrel (tapestry) that is unfurled at the Paro Festival each year.

This thongdrel rarely sees the light of day – making the above photo quite unique. It’s displayed once a year on the last day of the Paro Festival in March or April (the actual day varies as it’s based on the lunar calendar). But no matter the day, the event itself happens in the middle of the night – around 3 a.m. Which is exactly when my merry group of women travelers saw it this spring. 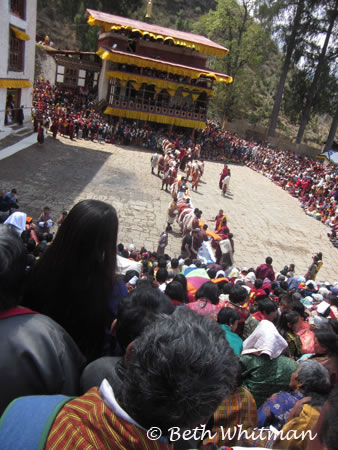 A procession files out of the Paro Dzong and a group of men carry the rolled-up tapestry to the courtyard, about 500 feet away. Over the course of 30 to 45 minutes, the thongdrel is hoisted up the side of a building for display. Thousands of Bhutanese (and some tourists) then get in line to walk by and touch the thongdrel for good karma. It’s believed that by simply viewing this, you can rid yourself of a lifetime of sins. (That’s good because I’ve now seen it 3 times 🙂 )

Showcasing this in the middle of the night helps preserve the thongdrel by shielding it from sunlight. However, on this day, rain got the thongdrel wet as we watched it being hoisted up. It didn’t dry before the light of day so it had to be left out in the sun before it was wrapped back up for next year. 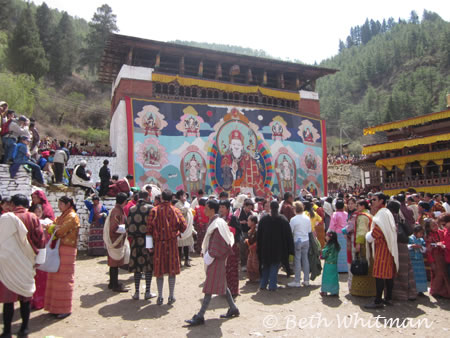 This is an auspicious day for the Bhutanese and they dress in their finest traditional clothing. This tsechu (festival), like others that happen around the country, are meant to bring together villagers from neighboring communities. The King is often in attendance at the Paro Festival, one of the largest in the country. (I’ve seen the King twice now, but no photos are allowed to be taken of him so you’ll have to trust me…) 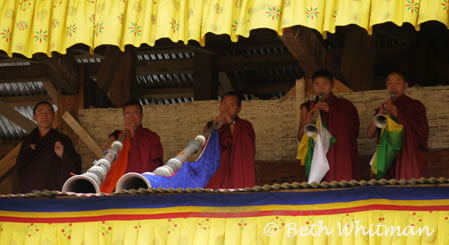 Long bellowing notes were heard from the horns blown by a group of monks who oversaw the festivities while dancers performed in the courtyard below. 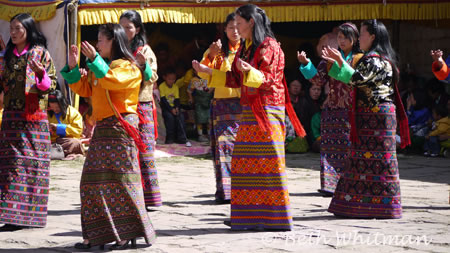 Most often, women and men perform separately (though there are 1 or 2 dances where they dance together). 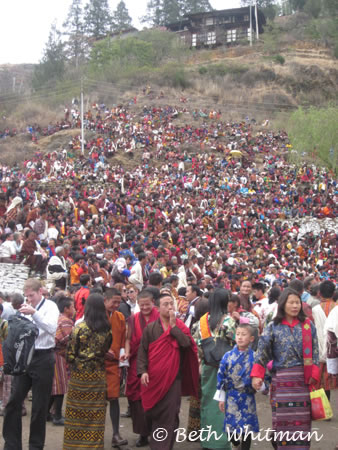 It’s considered good luck to have a little rain on this day (helps to wash away those sins, you know), but the rain drove the crowds away by late morning.

Rain or shine, you’re hooked now, aren’t you? Want to go to Bhutan for the Paro Festival? We’ve just announced the 2013 tour women-only tour to Bhutan! Join us for this event and release some of your sins 🙂

If you can’t wait until spring, try the Women-only Cultural Tour to Bhutan which includes the Bumthang Festival (and the secret naked dance!).

A visit to Bhutan is a transformative experience – how can it not be when you’re traveling to the country of Gross National Happiness?