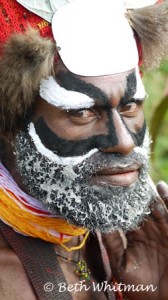 There aren’t a whole lot of books out there about Papua New Guinea. Much of the material written about the country has been heavy textbook-like volumes that are, while I’m sure quite valuable, very boring.

Ironically, there’s no other country that I think is more important to educate yourself about prior to a trip there. (And if you are interested in such a trip, see the WanderTours site for tours to Papua New Guinea.)

Despite the lack of books, I’ve discovered some over the years that I find to be completely captivating. If you have even an inkling of interest in this half island nation, I bet you’ll enjoy this list of the best books about Papua New Guinea!

Lonely Planet Guide to Papua New Guinea – All research into Papua New Guinea should start with the Lonely Planet guide. In my humble opinion, however, these folks don’t do enough to warn travelers of the potential dangers that come with traveling in the country though it is filled with easy to understand and well-written historical information. And it is crucial to understand the history of PNG in order to understand its present. That might sound cliche but because so much of the population lives as they have for thousands of year, you could say it’s true of PNG like no other country. Available on Amazon.

The Last Men: Journey Among the Tribes of New Guinea by Iago Corazzo and Greta Roba – Hands down the best book ever on Papua New Guinea. It would be natural to think that a coffee table book filled with images would not offer much value in terms of insight into a country (I have a shelf filled with such books) but this one has the best written information about PNG than any book I’ve read, including the LP guide. You must have this book. It’s currently only available used on Amazon at a very high cost. If you happen to find this in a used bookstore, snap it up. Available on Amazon.

Four Corners: A Journey into the Heart of Papua New Guinea by Kira Salak –
I’m going to gush here. Kira is my hero. She’s done some crazy S#[email protected] in her travels and this memoir of her time in Papua New Guinea chronicles her adventures there. I would not travel the way she does, nor should anyone else try, but it’s an incredible read – probably the best adventure book I’ve ever read and one that will definitely keep you hanging on the edge of your seat. Available on Amazon.

Islands in the Clouds by Isabella Tree – An excellent account of the author’s time in Papua New Guinea’s Highlands. She explores by plane and road to understand the rapid changes that are coming to villages due to the mining and timber industries. She’s got keen insight and the characters she meets along the way bring a jolt of reality to what these ancient peoples are undergoing. Available on Amazon.

Village on the Edge: Changing Times in Papua New Guinea by Michael French Smith – Over many years, the author spent time in a tiny village on a small island near Wewak in the north. In this book, he includes his observations about how the country and culture is changing due to outside influences. I most enjoyed his quotes from the locals about what they think of the changes and how they are trying to hang on to their culture while accepting more modern ways of life. Available on Amazon.

Under the Mountain Wall: A Chronicle of Two Seasons in Stone Age New Guinea by Peter Matthiesen – This book is a bit dense in terms of the content, but it is still an interesting read from an anthropological point of view. It chronicles Peter’s two seasons of living with a remote tribe near the Irian Jaya border. It falls under the category of being a bit too heady for me, but you might like it if you enjoy a more scientific approach to the culture and country. Available on Amazon.

by Inez Baranay – Now available for Kindle (for only $2.99), this chronicles the author’s time in Enga Province–known as a fierce and violent region. She was sent there by Australian Volunteers Abroad with little info or preparation and does her best to help, particularly the women of the region. Available on Amazon for Kindle.

Savage Harvest by Carl Hoffman – The author retraces the steps of Michael Rockefeller who disappeared while on an expedition in Papua New Guinea in 1961 looking for art for his father’s Museum of Primitive Art. This book brings the reader into PNG’s world of cannibalism, sorcery and headhunters. Available on Amazon.