Welcome to Honduras! It’s a breathtaking country in Central America; a tropical land bordering the Caribbean Sea and the Pacific Ocean and is covered in mountainous rainforest. It has rich Mayan history, beautifully preserved ruins, and picturesque islands dotting the coastline. But, the best part is the fact that it has really, really good food!

Honduras is a very multi-cultural country. It is part of Latin America, but its combination of Spanish, Indigenous, African, and other cultures make it very unique. Each of these ethnic groups offers an influence to Honduran cuisine. The geography of the country also affects the food – there’s a lot of fish along the coast, meat inland, and the tropical climate offers a ton of fresh fruits and vegetables year-round. 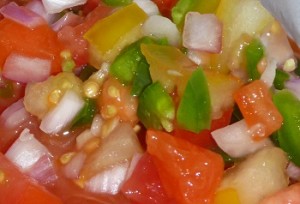 Like most countries in Central America, the most commonly used ingredients are tortillas and beans (and often rice – but not always). In Honduras, however, the locals prefer refried beans (rather than using the whole bean), and salads are quite common. Salsa is used often, and many dishes are served with pickled hot peppers and onions. Another food that separates Honduras from its neighbouring countries is the coconut. Though coconuts are common throughout Central America, they are used in most dishes in Honduras in some form.

Though there are a wide variety of dishes in Honduras, many very similar to those in other countries in the area, there are some that are considered to be local specialties. Also, though many Honduran foods have the same names as Mexican, or other Latin dishes, they are very different. Burritas, for example, sound similar to Mexican burritos, but are two flour tortillas accompanied by refried beans, beef or pork, and salty cheese. These ingredients are then put on the tortillas, using ones hands, and the tortillas are folded and eaten. A few more popular Honduran foods include conch soup, tacos, anafres, and chimole.

Do you have a favourite Honduran food? If so, let me know! Be sure to come back on Wednesday when we’ll try out baleadas, a popular Honduran street food. Until then, go explore the cuisines of the world! There’s so much food out there just waiting to be discovered.