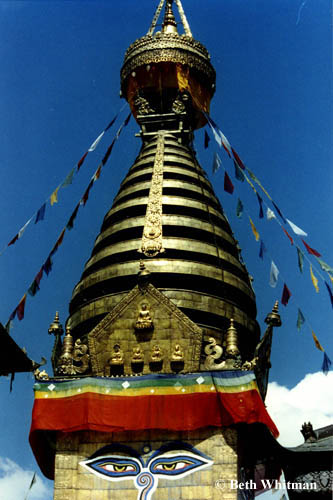 My friend, Boo, sent me an email last week and mentioned her recent travels to Nepal. She said of this Himalayan country, it was, “…intoxicating, mostly due to the mix of cultures and religions, on top of the sheer humanity of Kathmandu. It was a good reminder that travel is really the only way to have your eyes opened further, and remind yourself that your understanding of the world is actually just a sliver of how it is…”

She encapsulated exactly why I think travel is so important to each and every one of us. While on the road, we are confronted with cultures so vastly different than ours, that we can’t help but become more open to the events and people that surround us in our own tiny worlds.

This is where I admit to being a bit prejudiced.

As a traveler above all else (writer, photographer, businesswoman, mentor…), I can hardly help but to judge those who’ve never traveled, who have no desire to do so and who simply aren’t curious about other cultures. I realize as a practical matter that not everyone can afford to leave their country for vacation, but not being open to other cultures in your own backyard or diving into a National Geographic to learn about other societies is beyond my understanding. (And, dare I say, is in my humble opinion, also at the backbone of much of the closed-minded rhetoric we hear in politics these days.)

But what is it that makes us travelers so different than those who wouldn’t step foot on a plane for places where people only eat with chopsticks or (gasp!) their hands? Boo’s statement made me think about why I travel. Here’s what I came up with:

1) My early travels were likely a way for me to break away from home — though I was already living in another state going to college so that doesn’t completely explain it. A high school friend said to me years after I had begun my world travels, “You always wanted to get away from New Jersey.” While I wouldn’t dispute that, I also don’t quite remember it that way.

2) Once I had my first experiences meeting people from other countries during a 3-month-long hosteling trip around the U.S., I was completely hooked. Meeting young Swiss, Japanese and Israeli backpackers, and being exposed to their views of the world, made me long for more.

Growing up in a mostly white, middle-class town gave shape to a narrow-minded approach to life that 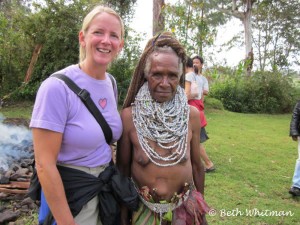 didn’t split open until I landed in Thailand, stayed in small village in the south and watched young children swimming in the same river where the sewage from my hotel was being flushed below. That was culture shock in a nutshell. I didn’t like what I saw, but it opened my eyes to the fact that there are other ways of living than my own.

3) When I returned from one of my early trips abroad — 3 months to Thailand, India and Nepal — I had a different approach to the Thai waiter at a local restaurant and the Indian worker at the gas station down the street. I now had something in common with these people: a thread; a point to begin a conversation. I know many people quite skilled at conversation that can find a common thread with most anyone, but for me, it’s now a lovely place to start.

But not only do I have a connection with people in my own city, I have a better (not perfect) understanding about the world at large. For example, I get why immigrants are so desperate to make their way to my prosperous country. I have empathy for Central American farm workers who will risk their lives to cross the border. I’ve seen their poverty. I would likely make the same decision if it meant a better life for my family.

4) The million-dollar question is why I continue. For me, this is probably a physiological condition. Meaning I’m hooked. Addicted. Can’t stop. The serotonin gets triggered, neurons start firing and I just get happy thinking about a trip. Without a plan for my next adventure, I’ve got issues.

Boo is fortunate in that she works with with Sherpa Adventure Gear, a clothing company based in the U.S. with manufacturing facilities in Nepal. Most people are never given such an opportunity to travel abroad with their jobs, but it doesn’t mean we can’t all be more open to other cultures – whether it’s through actual or armchair travel (heck, visit your local Ethiopian restaurant for a bit of international exposure!).

While you might be able to see Russia from your front porch, that’s nothing compared to actually shaking the hand of a Russian woman and perhaps knocking back a shot of vodka with her.

What Boo captured so well in her statement is a benefit of travel. Likely not the reason one begins to travel but a critical aspect none-the-less. For those of us who are experienced or wannabe travelers, it is so important to share with those who are, shall we say, a little less open-minded, why we choose to pack up our bags once a year (or once a month) to far flung destinations. Maybe this is what “think globally, act locally” really means 🙂