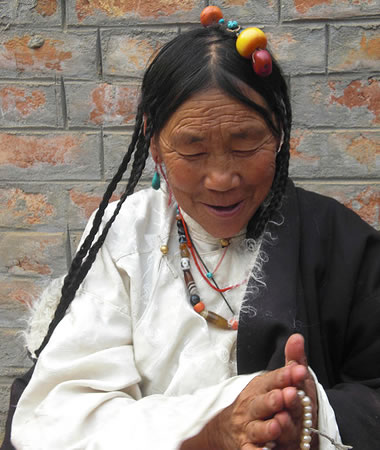 The weather-beaten woman took a contemplative step, raised her arms high above her head, clasped her hands together, and swept them forward like a diver entering the sea. The full expanse of her small frame embraced the dusty pavement, from her head and shoulders to her toes. After holding the submissive position for an extended moment, she picked herself up, took a second step, and repeated the process again and again, slowly inching her way around the perimeter of the sprawling Jokhang Temple. Hundreds of other pilgrims rippled like waves beside her.

She called to mind the women I’d seen at the Shrine of the Virgin of Guadalupe in Mexico City crossing the holy grounds on their knees. Their devoutness had similarly transfixed me: hundreds of women wrapped in shawls with rosaries wound between their fingers, sobbing as blood seeped through their skirts. But while this Tibetan woman threw herself upon the pavement time and again, she didn’t wince and she didn’t bleed.

Tibetans are no strangers to pain. Violence has marred most of their past half century. When the Red Army invaded their land a year after seizing power in China, their ill-equipped troops hardly stood a chance — they were outnumbered more than eight to one. Their spiritual leader, the Dalai Lama, was forced into exile in 1959 and by 1970, an estimated 100,000 Tibetans had joined him. Of those who stayed, hundreds of thousands more perished under the stringent Chinese rule. 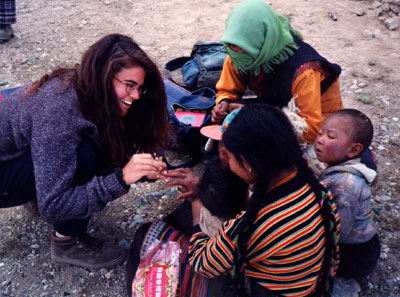 Chinese were the oppressors. A year of working as a journalist in Beijing taught me there were no such clear-cut answers. As I explored Tibet’s river valleys and rugged rural villages, I tried to keep the passionate perspectives of my Chinese friends in mind:

“They were living in the Dark Ages before we got here.”

There was some truth to these comments. Before China’s takeover, there were few roads and virtually no electricity in Tibet. Health care and education were only available to religious leaders. Thanks to the Chinese, Tibetans now had public schools, medical facilities, transportation systems and — in Lhasa — Internet cafes and karaoke bars.

But was modernization worth the price of religious freedom?

My inability to draw a conclusion frustrated me. In an effort to clear my thoughts one morning, I rented a two-speed bicycle from a hostel and pedaled out of town. An hour into the journey, I stumbled upon a monastery more than half a millennium old. The front gate was draped with a strand of prayer flags that had been bleached into pastels by the sun. I parked the bike and entered the crumbling edifice. Its corridors were dark and damp; incense and yak wax lingered heavily in the musty air. The walls were shrouded with fading thangkas — paintings depicting Buddhist deities. 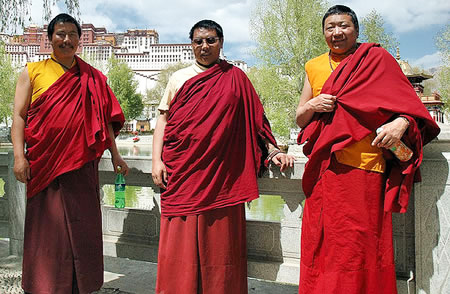 It seemed I was alone until I noticed a monk sitting near a window, his round face illuminated by a thin stream of sunlight. He didn’t appear much older than me — 25 or so. I greeted him in Mandarin, but he responded in English as he strode over to join me. I asked about the 11-headed deity whose mural adorned a nearby wall and he explained it was Chenresig, the Bodhisattva of compassion. “And this Bodhisattva with the thunderbolt is Channadorje,” he offered.

The tour that ensued lasted nearly three hours and took us deep into the labyrinths of the monastery.

Afterward, we shared a lunch of bread, yogurt, and milk tea — a buttery cocktail of boiled yak milk sprinkled with curly yak hairs — on a terrace overlooking Tibet’s rock-and yak-strewn landscape. The monk asked how I came to his part of the world, which gave me considerable pause. I rarely admitted I was a journalist in China, as most Chinese instinctively distrusted the media. But how can you lie to a monk? I confessed my profession and he gazed off into the distance.

“I’ve never spoken to an American journalist before,” he softly murmured.

He let this piece of information tumble in his mind a few moments before quietly asking if I knew what the Chinese had done to his land. Was I aware that, in the past year alone, several monks had “disappeared” from this very monastery?

My stomach tightened as my eyes darted around the terrace. I had a thousand questions to

ask. But what if our conversation was overheard? Chinese secret police had been known to pose as Tibetan monks. What if one was listening? It seemed too great a risk — for both our sakes, but especially his. I changed the subject instead. “Do you speak Mandarin?”

“I can, but I don’t,” he said, then switched the topic of discussion again. He had an English

class to teach and needed to go. Taking that as a polite invitation to continue my day sola, I stood up to leave.

The only light source in the classroom was the sun. The floor was packed dirt and the white-washed walls and ceiling were earthen, but a shiny blackboard stood up front with chalk that

resembled chunks of pumice. A troop of 5-to 20-year-old monks with neatly shaved heads soon filed in. They were rambunctious in their violet-red robes, but stopped short the moment they saw me. I greeted them in English, which they found hilarious. Their teacher snapped them to a quick attention. Motioning for them to open their workbooks, he conducted a lesson on colors.

“Red, grin, yell-o, arnge, bloo,” the students rocked back and forth, murmuring as one.

I started wondering whether the students even knew what the words meant beyond some bizarre, foreign mantra when the teacher began a new color scheme: “Pink, purple, black, white, brown.” He pronounced the last word hesitantly as “brune” and glanced my way for help.

When I corrected his pronunciation, the littlest monk giggled and — when I looked at him — turned his head away shyly, stealing my heart in the process. The teacher posed a question in Tibetan and the class once again erupted in laughter. He looked at me, smiled, and handed over his workbook. “Will you lead our class?” he asked.

I walked to the front of the room and pointed at my shirt. “Black!” I enunciated carefully. The monks looked surprised. “Black!” I repeated.

Then, from the corner, a monk whose years were half my own took the lead. “Blllek,” he

Confidence was won. “Blllek!” the other monks chimed in.

After our guided tour of the color wheel, the class ended and the monk escorted me to my bike. It was nearly dusk: the golden Dharma wheel that crested the monastery’s roof glowed in the sunlight. We exchanged addresses, but he warned that it might be a while before he wrote. “I can only mail letters through Western tourists, and they don’t come by so often.”

That’s when I remembered the reason I had set out on my bicycle journey in the first place: To draw some conclusions after a year of traveling in the People’s Republic of China. “I feel so confused,” I confessed. “I don’t know who or what to believe in all of this, and how can I be a journalist if I cannot…”

He placed his hand on my shoulder. “There are many ways to look. Trust what you see,” he said quietly. Then he turned and walked away, his red robe flowing behind him.

Stephanie Elizondo Griest has mingled with the Russian Mafiya, polished Chinese propaganda, and belly danced with Cuban rumba queens. These adventures are the subject of her award-winning memoir: Around the Bloc: My Life in Moscow, Beijing, and Havana (Villard/Random House, 2004). Atria/Simon & Schuster will publish her memoirs from Mexico in 2008, and Travelers’ Tales published her guidebook 100 Places Every Woman Should Go in spring 2007. A former Hodder Fellow at Princeton University, she has also written for the New York Times, Washington Post, Latina Magazine, and numerous Travelers’ Tales anthologies. An avid traveler, she has explored 25 countries and once spent a year driving 45,000 miles across the United States, documenting its history for a website for kids called The Odyssey. Visit her website at Around the Bloc.