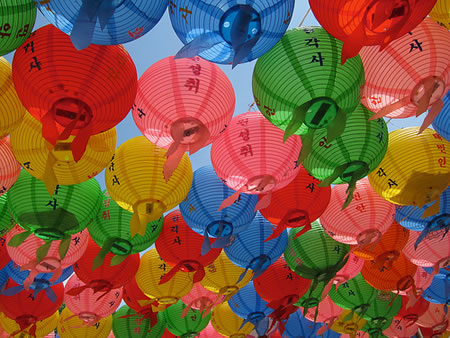 I had been travelling in Asia and living temporarily in Seoul, South Korea as an English as a Second Language teacher. I had been instructing a high school class for quite a few months when Seung Soo, one of my favourite students,
invited me to join his family to visit his grandparents’ grave. We were always encouraged by the director to spend time outside of the classroom with our students in order to better relations. Also assuming this invitation was something of great honour and glad to share in such an experience, I immediately accepted.

When the scheduled Sunday came around, I realized I had no idea what was appropriate to wear to a Korean gravesite. I knew that the traditional wedding white in the West was the color worn to funerals in the East. Having traveled to Korea alone and not knowing anyone that I could ask such a sensitive question to, I was left to my own devices.

After trying on several outfits, I chose a dark, formal looking dress and matching heels, which was the foot attire worn in the most casual of circumstances in Korea. A few minutes later, my student arrived at my door wearing a bright yellow t-shirt, cut-off jean shorts, and a baseball cap. As I climbed into his parents’ car, I tried to think of something sad to make sure I appeared calm and mournful. I was always told by my Korean colleagues that I smiled too much and that this came across as not being respectful to others, especially people older than I.

I was greeted with big smiles from Seung Soo’s family, and his mother told me she was glad I had come along because we were going to have a great day. The entire family was dressed in brightly colored t-shirts and shorts. Beside me in the backseat was a large picnic basket and a soccer ball. Clearly, there was no need for heels.

An hour outside the city, we slowly wound our way up and down narrow roadways carved into the sides of 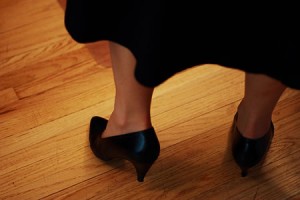 mountains. As we drove into the path of the sun, the humidity of Korea’s tropical summer heat began to rise in the car. Opening the windows brought no relief and only more waves of heat. I quietly asked Seung Soo if his family would mind turning on the air conditioning, but the family fought with one another to be the first to explain that using the air conditioning could kill a person.

With humidity in the car continuing to rise, I could feel the perspiration running down my legs into my shoes, and I was sure the makeup I had chosen to wear was pouring down my face in steady streams of sweat.

After hours of driving, we finally reached our destination. We parked at the base of several mountains, with no human life forms to be seen in any direction. I followed along as the family unpacked the car and began climbing a straight incline up one of the mountains.

I could feel the weight of my dress and high heeled shoes as I struggled to keep up with the family’s climb. The dark colour of my dress was further tempting the sun to beat down on me, and with the placement of each foot, I could feel the sweat that had built up inside my shoe, making sounds as though I had walked through the rain.

As Seung Soo’s sister happily chatted away to me during the ascension, I could only nod or shake my head in response. If I was to make it up the mountain, I couldn’t spare the extra energy it required to verbally respond. 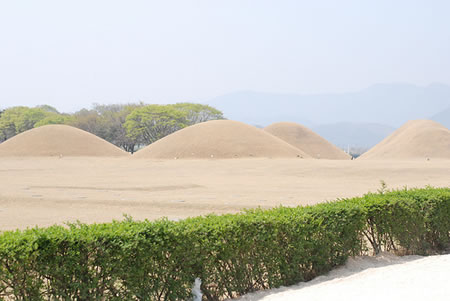 As we reached the pinnacle of our journey, I could see what looked like hundreds of small domed mounds of dirt. When we arrived at two mounds of earth side by side, my student informed me that we had reached his grandparents’ grave.

Before I had much time to think of what I was supposed to be doing, whether saying a prayer or bowing, my student’s sister grabbed my hand, pulled me toward a clearing on the edge of the mountain, and we began playing what would have been in different circumstances, a version of beach volleyball.

A short time later, my student joined us and suggested we all go on a hike. I wasn’t sure where we’d go, considering we were on top of a mountain surrounded only by other grave plots, but I followed the two of them as they walked between the graves, singing a Korean pop song.

When we had reached the other side of the mountain, I noticed a loudspeaker mounted on top of a long wooden pole. It was surrounded by nothing humanmade and looked extremely out-of-place in its remote setting. I asked my student about it, and he explained we were beside the North Korean border, and it would warn us of their attacks.

When I asked if he had ever heard any such warnings, he replied matter-of-factly, “Of course. Most times.” I heard enough to understand what I needed to know. I didn’t want to ask for clarification on what “Most times” meant.

When we returned to the gravesite, his mother had a picnic blanket spread 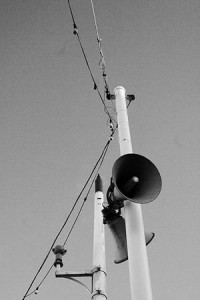 out directly on the plot and had just finished placing the lunch on the blanket. When she handed me an apple I knew from past experience that I should not refuse any food and should eat whatever was offered to me very heartily. After the mountainous climb and it now being late in the day, I found I was also quite hungry.

When I bit into the apple, everyone’s singing was replaced with silence. Seung Soo looked at me with very wide eyes, the Korean version of shaking your head no. When I looked at his mother, she took another apple and placed it on top of the plot in a ceremonial manner to illustrate what I should have done, and it was then that I realized I had eaten the sacred offering for his dead grandparents.

After we ceremoniously placed all the fruit on top of the plot, my student’s father poured me some of the wine and handed the glass to me. I thanked him in the best formal Korean I could and waited for the others to have their glass of wine before drinking mine.

After what seemed like a long time with no one moving I had to assume they were waiting for me to begin. This must be part of the ritual, I thought. I would drink first, and then the others would follow. I said “Thank you” once again in formal Korean just to be on the safe side and took a big sip of my wine. When I looked up from my glass, pleased with myself for understanding the ritual as we went along, I saw my student opening his eyes wide once again. Then, in a sudden action his father grabbed the glass from my hand. Did I drink too much? Too little? Maybe I was supposed to pass my glass for someone else to drink from it. My questions were quickly answered when I saw my student’s father pour what was left of my wine over the grave plot. I had done it again. I could only hope Seung Soo’s grandparents were understanding.

After bowing three times with our heads touching the 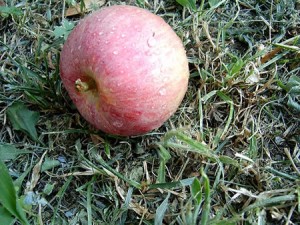 ground, the ceremony was over, and it was time for us to eat and sing again. Halfway through lunch, the loudspeaker came on sounding very official and very serious. Great, I thought, North Korea is attacking. A great way to end my day.

My student must have understood my fear, because he said, “Don’t worry, teacher. They are not attacking right now.” He rushed to explain that it was only an air-raid drill and we had to leave quickly because the security was watching our time.

I knew well of the monthly nuclear bomb drills we had in Seoul. No matter what everyone was trying to accomplish at the moment, all cars would come to a standstill, all windows and doors would be immediately closed, and everyone on the sidewalks would take cover inside buildings. The situation with North Korea was not taken lightly by anyone.

I had to wonder, though, what security was watching us in the remote mountains at a gravesite. But sure enough, I could see two uniformed police not too far off in the distance. In a flash, my student’s mother threw me the blanket, his father grabbed the picnic basket and what was left of the lunch, and before I knew it, I was following everyone in a dead run down the steep mountain slope. I wasn’t sure why we were going to kill ourselves in an attempt to illustrate that we knew how to survive, but I had given up asking questions and just followed along.

Many scratches, bruises, and one less high heel later, I arrived at the base of the mountain with everyone else and jumped into the car. As we sped away toward home, still out of breath from the sprint down the mountain, my student’s mother said something in Korean and asked my student to translate.

“Mother says,” Seung Soo began through heaving breaths, “that it was such a wonderful day, that she would like for you to come away with us again next weekend.”

Melissa Valks is an adventure-seeker who has spent time studying the life of
Arowak Natives in the Amazon Jungle to trekking in the Himalayan Mountains in
Tibet.

Melissa Valks has had her short-story, ‘In a Manner of Speaking’ published in
the Travelers’ Tales book ‘Whose Panties Are These?’, and won a Macmillian
Publishers short-story competition with her piece, ‘Lessons Learned’, which was
reprinted on-line in One-Stop-English. This same piece has also been published
in a book entitled, ‘Compose, Design, Advocate’, by Anne Frances Wysocki and
Dennis A. Lynch. ‘Lessons Learned’ is additionally being used by the Tarsalkodo
Institute in Hungary as part of the course material.

She recently published a book entitled, ‘Living inside the Hermit Kingdom’ about
her first year living in South Korea as an English as a Second Language teacher.

Melissa Valks lives in Ottawa, Canada and currently works with a foreign
mission.