Can you shift the balance of power? 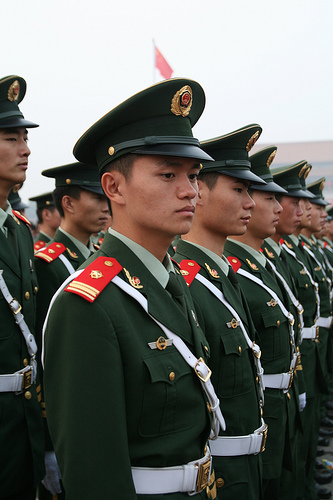 “Nimende huzhao!” demanded the Chinese guard at Xegar Checkpoint, a small army outpost. It was the last one before leaving Tibet. He peered menacingly at the driver of our weather-beaten minibus.

“He wants your passports,” translated Lapa, our Tibetan guide. Mentally, we jumped to attention and, with misgivings, handed over the documents.

We were a diverse group of eleven strangers from five countries who had met in Katmandu and flown to Lhasa to begin our exploration of Tibet. All week long we had been captivated by the gentle monks, the ancient monasteries, and the turquoise mountain lakes. In the process, we had become friends.

The guard strode away from the bus, through a high gate emblazoned with red Chinese characters, and into a dusty courtyard. Lapa scurried after him. Another routine bureaucratic check, no doubt. We hoped this one would be quick like the other three.

But there was something ominous in the way the guard’s superior–a rigid, strutting little commandant–peered out from under his military visor and waved his arms at Lapa. Was it conceivable that he would keep us here for questioning? This was, after all, the government of the Tiananmen Square massacre and the brutal, decades long repression of Tibet. 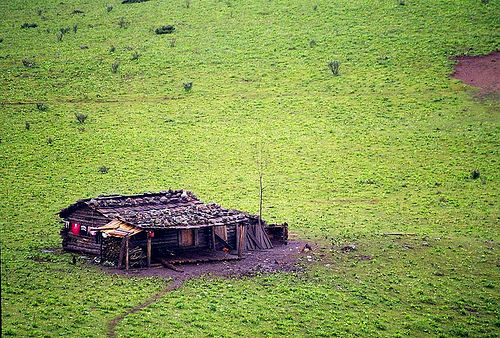 agitated. “They want to send us back to Lhasa,” he announced, “but is not possible. Our group visa is good only for going one way.”

“So what’s the problem?” asked Arie, a middle-aged Israeli.

“Is Kristoff’s passport,” answered Lapa. “One of the numbers put on visa by Chinese Embassy is different from one on passport. They say he cannot go through checkpoint.” Kristoff was a quiet, likable young German.

Lapa walked back through the gate. He pleaded and cajoled, but the officer remained intransigent. It was sad to see such a gentle man subjected to this humiliating game of cat and mouse.

“The Chinese will not forgive my country for its recent proclamation about human rights in Tibet,” Kristoff said. “I’m sure the embassy in Katmandu changed that passport number on purpose. But I will stay here. Please, you must go on.”

“Never,” said Arie, who had taken to walking back and forth outside the barbed wire, glowering at the commandant. “It’s a disgrace! That man is a dictator. He’s playing with us. How come we passed the other checkpoints without a problem? I want my passport, and I want my freedom. Now!” He pounded the air with his fists.

“Be still, Arie, or you’ll get us all in trouble,” said his wife, Anna. “You’re not in Israel.” Two hours passed. The sun beat down.

I retreated to the bus and tried to read. But nothing could alleviate my fears. How long would this petty tyrant hold us? There wasn’t a phone in sight, and I couldn’t speak the language. During the week we’d experienced some uneasy moments: bouncing over washed-out roads and being whipped by rain and waterfalls in an open truck. But that was adventure. This was frightening. We were seeing another Tibet. The Tibet that was held hostage–like us.

Outside my window, Anna was engaged in intense conversation with June, a French teacher from California, who’d recently been in China. “I have an idea,” Anna said, reentering the bus and gathering the women around her. “For three hours the men have been trying to settle this, and they’re getting nowhere. Why not try a different approach: quiet, friendly persuasion? We’ll walk through the gate and speak to the leader face to face. It just might work.” 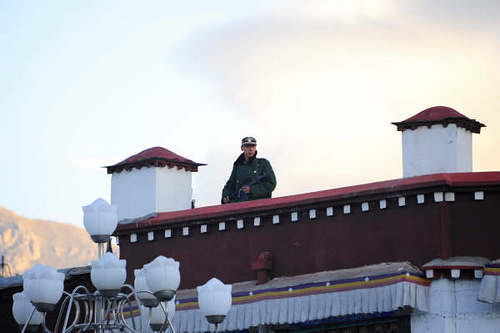 We started, slowly, toward the compound and pushed the gate open. The commandant, who had been supervising a motley group of soldiers, backed up a little, his eyes wide, his arms akimbo. As we approached, he motioned for a chair and sat down in the middle of the dirt yard. Lapa made frenzied gestures in an attempt to stop us, then fled to a far corner.

Anna opened her arms and regaled the stunned officer. “We have only goodwill toward you, and we want to leave your beautiful country with friendly feelings.” He listened intently. Did he understand English?

June knelt in the dust in front of him and tried her limited Chinese. “Wo jiao June.” (My name is June.) “Nin guixing?” (What is yours?) “Women hen xihuan Zhongguo.” (We like China very much.) Then she introduced us, one at a time.

Else, from Denmark, spoke next. “Sir, we can’t go back, and you won’t let us go forward. We all have families. I beg of you….”

“I love your country,” Brigitte said. “But I must fly in two days from Katmandu to Switzerland.” She made the sound of a plane and spread her arms like wings, swooping, turning. No response.

Each of us tried to tap the man’s innate humanity, to find a link between us, to give him a chance to save face. But it seemed hopeless. We were getting nowhere.

June tried again. “We are all friends,” she said in Chinese, reading randomly and with great enthusiasm from her Chinese-English dictionary. “Where is the hotel? Please open the door. I must go to bed…. Oops! Wrong page.” The commandant’s dark eyes stared directly at June, and the serious face cracked just a little.

Encouraged, June tried again, in Chinese: “What are we having for dinner tonight? Can I camp here? Which way to the bathroom?”

In an instant, the curtain lifted from the frozen countenance and a smile appeared. Then full-throated laughter. He rose from his chair. “O.K., O.K., you may go.” What? Did I hear English?

All inhibitions evaporated in that moment of intense relief. Joyously we surrounded the officer, clapped him on the back, and shook his hand. Lapa stood open-mouthed. He seemed to be in a state of shock.

As we drove off, cheers erupted. The crisis at Xegar Checkpoint was over. With satisfaction we reviewed our success in softening the stance of the border bully. Our approach had worked!

And we’d given this man a chance to do the right thing, perhaps saving some future group from similar harassment. We had no idea whether he’d acted on orders or was independently rattling his saber. But there had been at least a temporary change in his attitude. We had reached out, and he had responded positively. This was gratifying. We felt no anger, no malice.

In silence we continued up the rich plateau of Thingri with its golden wheat fields, stone huts, and small, walled villages. The bus wound over perilous, unpaved roads inches from cliffs unprotected by guardrails. In two hours of climbing we reached the Lalung Leh Pass (17,500 feet).

A fierce wind pummeled us as we stepped from the bus into the shadow of waving prayer flags. Still emotionally exhausted, but strangely exhilarated, I stood looking at the distant mountains. At that moment my admiration for the Tibetan people was at its height. How could they maintain their tranquility and practice compassion toward their oppressors in the face of such odds?

“Hey, we made it! Long live Tibet!” shouted June. “And isn’t that Everest peeking out of the clouds? Look, Lapa! Look, everyone: The top of the world!”

This article is reprinted with permission and originally appeared in A Woman’s Asia, edited by Mary Beth Bond.

Meg Noble Peterson is an author, essayist, and playwright who has traveled extensively for the past twenty years. Her latest book, Madam, Have You Ever Really Been Happy? An Intimate Journey Through Africa and Asia tells about her life-changing ten-month solo backpacking trip around the world, unfettered by deadlines and armed only with an open ticket and a camera. She regularly travels to Asia and recently climbed Kilimanjaro. Visit her website and blog.