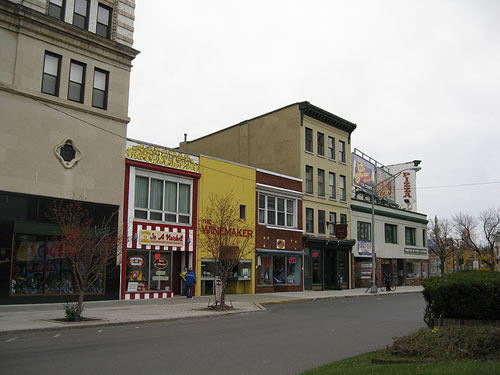 This summer I went to Jon’s family reunion in Watertown, New York, just about as far north in NY as you can get without being in Canada.

Watertown’s got some charm to it. It’s home to an army base, Fort Drum, and sees lots of Canadian who come for the shopping deals. There are big chain stores and restaurants but also lots of independent cafes, restaurants, bakeries and other businesses that can hold their own.

We go every couple of years to catch up with Jon’s mom, siblings and extended family. Sometimes we stay with family, sometimes we rent a house. This year we stayed in a hotel that was centrally located to restaurants, shops and an amazing vegetarian grocery store/cafe.

Being so centrally located meant we were near a busy road in terms of traffic. Not a highway, but just a lot of cars pulling in and out of the parking lots of fast food restaurants, bars and chain stores.

On the Sunday morning of our stay, I headed out for a long run, 12 miles.

Because I didn’t know the area well, I figured out a route where I could run six miles out and six miles back to the hotel. I wanted to stick to the main roads so I wouldn’t get lost. These roads also happened to be busy which I figured would be safer than side roads since there would be people regularly driving by in case something happened to me. I didn’t want to stumble and fall on a country road.

Nothing less than a threat

.
The first thing I noticed was that there were a lot of young(ish) people already up and about so early in the morning. The first group I happened upon were a few twenty-somethings hanging out in the parking lot of a Dunkin’ Donuts. “Hmmm,” I thought, “early for them.” But then it dawned on me they hadn’t been home yet and they were likely winding down from their Saturday night.

Then as I ran on, I started to realize how far away from Seattle I really was. In Seattle, pedestrians have the right of way and drivers are very courteous when it comes to allowing you to cross the street, whether at a crosswalk or elsewhere.

In Watertown, drivers ignored the fact that I was there (yes, I’m sure they saw me) and drove in front of me while they were either exiting or entering a parking lot, not even hesitating to let me run by. OK, I can deal with that. 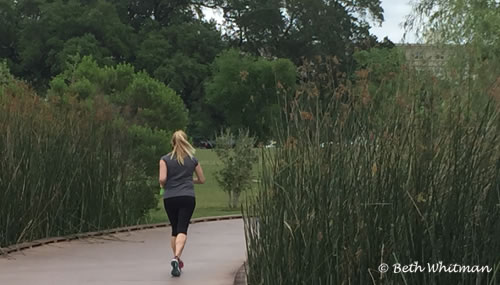 What was more annoying, however, was the leering, the slowing down of the vehicles on the road and the head-turning by male drivers of pickup trucks andÂ  motorcycles.

Because it was so early, I had to assume that these guys, too, were still out from the night before and not necessarily up and at ’em in time for church.

To a guy, this behavior might sound innocuous, innocent, maybe even a compliment. But for a woman, these small gestures are nothing less than a threat to what might happen if a situation were to get out of control.

I can’t tell you the last time I felt the slightest danger while out for a run. Not even in New Orleans and certainly never in Seattle.

Particularly in Seattle, I feel very safe during my runs and walks around my neighborhood. Don’t get me wrong, it’s not a perfect place. There have been reports of women runners being attacked or even hit by hit and run drivers. But the only nods and smiles I get are from other runners, many of whom I recognize since we travel similar routes.

I don’t know what the crime rate is in Watertown, but it’s not the kind of place you’d consider to be crime-ridden. But still, I had a feeling of angst as I ran. A sense that I could have been easily snatched by a couple of guys in a pickup truck.

As I got a bit further out of town near my four or five mile mark, I got so uncomfortable that I turned around and headed back toward the hotel. I did find another route that was more populated and was able to stretch out the run to nearly 12 miles. But that run was a bummer for me.

.
Jon has often said to me that I have a really good gut instinct when it comes to our travel choices. I dazzle him with my ability to find interesting (and safe!) alleyways in cities and fascinating locals to chat with in the most exotic of destinations. I now wonder if that’s a skill I’ve honed because I HAVE to be super tuned in whereas he doesn’t. He’s not aware of the same potential for threat that I am. But that means I’m also tuned into the good.

I now think this is why women have such a good sixth sense. We have to. Because it’s a matter of life and death otherwise.