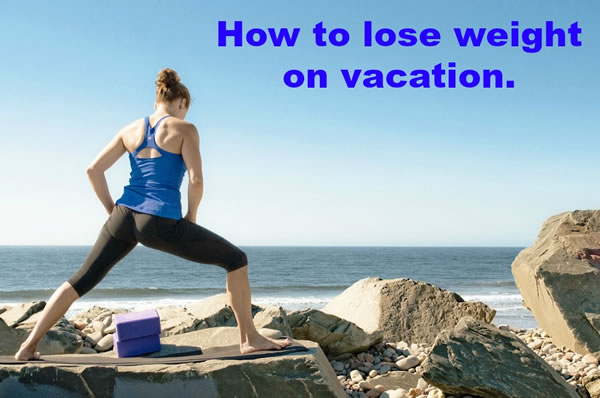 I started noticing a trend with myself over the past couple of years.

I was losing weight when I traveled. Not a lot, but at least a couple of pounds. And it at beats the alternative of gaining weight!

That is so antithetical to what you would think. But it’s true. I know this because I weigh myself nearly every day and keep track of my weight on my iPhone calendar. I’ve done this for years.

I think my mini-obsession started when my weight creeped up after I took one particularly filling trip to Kauai. It was a culinary press trip and our group of journalists ate and sampled our way across the island. I put on a few pounds during that trip. And then I had a hard time taking it off.

Those pounds eventually came off after a lot of exercise, but I told myself I would never eat my way through a trip again and put those pounds back on. That’s been part of my motivation to keep fit ever since.

You Don’t Have to Deprive Yourself While on Vacation

I’ve received a lot of emails over the years from people who’ve said they admire my commitment to staying fit, even while I travel. One friend (in the travel industry) told me she was going to start exercising in a couple of months, after she had put some trips behind her. She wanted to sample all the food she could during her travels and didn’t want to limit herself.

That’s a fair point. But I would argue that watching what you eat doesn’t mean you have to deprive yourself and miss out on cultural experiences. It just means you have to eat less and, ideally, make time for exercise.

What you’ll find is that if you eat well and partake in just a moderate amount of exercise, you’ll feel better and therefore have more energy to enjoy your destination. Here’s what I do:

First, I exercise, in one form or another, every day, or as near to every day as I can. For example, when I was in London last month, I ran every day that wasn’t a travel day. Normally I would take one rest day during the week but I used my flying days as my rest days.

Jon doesn’t run but he weight trains and uses a stationary bike for cardio so I would accompany him to the hotel’s gym on occasion. Yes. On some days I worked out twice (once running, once weight training at the gym). Add to that all the walking we did each day and I ended up with days like this: 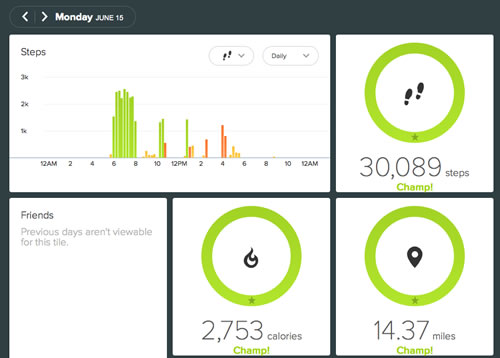 That’s more than 30,000 steps in one day according to my FitBit!

I Watch What I Eat.

Since beginning my P90X workout sessions, I’ve become pretty tuned in to fueling my body for getting the most out of my workouts. I’d say this is common for most people even remotely interested in getting fit. You start to realize that eating half a pizza for dinner is going to affect the next morning’s workout. Because you want to improve upon your workout sessions, you then start eating better the night before and discover that your next workout improves.

I would say that 80% of what I eat/drink, is a very conscious choice and that I think about the results of it. (The other 20% is just pure indulgence.) Food is supposed to give you energy, not take it away. But just think about how you feel after most meals. We’ve come to accept that we want to take a nap after eating. But that is not normal! It’s not how our bodies should be operating.

When I eat something and want to take a nap afterward, I make a mental note and don’t eat it that food again (or I still eat it and accept the fact that I’m going to suffer the consequences). Example? Waffles. Love ’em, but they are a snooze-waiting-to-happen for me. 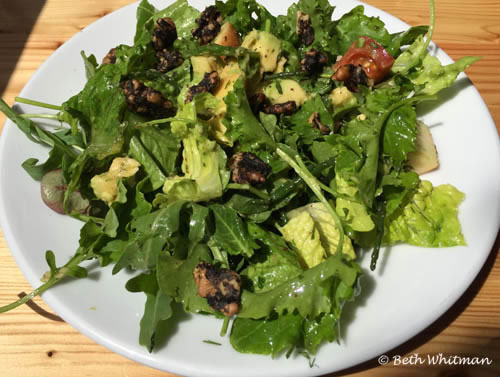 During that London trip, in addition to exercising often, we also sought out healthy eating choices and ate at some of the best vegetarian restaurants in the city.

This was a salad from The Whole Life Cafe in Convent Garden. I also had a smoothie and some raw (meaning not cooked/baked) crackers with hummus. Simply delicious it was!

I think the biggest factor that has allowed me to drop weight when I travel is that I don’t snack between meals like I do at home. I enjoy my breakfast/lunch/dinner and keep myself busy throughout the day, not even thinking about eating between meals. At home that would be an apple with peanut butter (approximately 300 calories), a handful of mixed nuts (anywhere from 160 – 250 calories) or a protein bar (about 200 calories).

These little snacks can really add up during a week’s vacation.

I’m really fortunate that I have a significant other who not only supports what I do, he takes a very active role himself in working out and eating well. Although Jon doesn’t shy away from eating an entire chocolate bar in one sitting (something I just can’t do), he also has been known to eat kale salads for breakfast (also something I just can’t do).

The times I eat the least healthy are when I’m in social situations and want to participate in the fun. I admit it’s really hard to curb my desire to eat a lot (and often unhealthy foods) when socializing. But even then I try to make a conscious choice and know that I’ll suffer the consequences which means 1) I either have a slow run the next morning if I don’t eat well or 2) feel a bit removed from the group because I’m eating something completely different than everyone else.

Once you start becoming more aware of how food and exercise affect you, you’ll want to start feeling good more often, especially when you’re on vacation! Who wants to sleep through the afternoon when there are sights to be seen?

It’s a process. And I’m constantly working on increasing that 80% of conscious decision-making about my food to 90%. And then hopefully 100%. Maybe one day I’ll eat kale for breakfast. For now, it’s one step at a time…