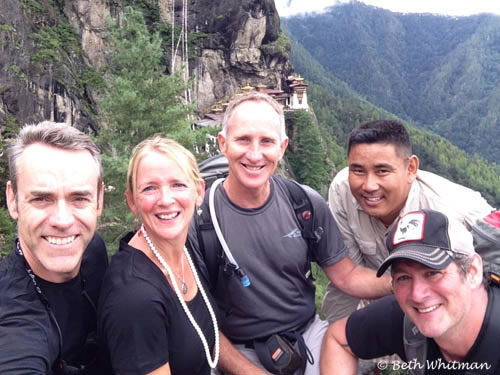 I completed the Snowman Trek more than a month ago but haven’t yet posted about my experience.

Mostly it’s because I spent some down time in Kauai after the trek and then went to Thailand to lead a tour of fab women on our Northern Thailand and Laos Hill Tribe tour.

But I also haven’t written about it because it’s difficult to know where to start writing about such an epic trip. 25 days, 220 miles across Bhutan’s Himalayas.

For future posts, I’ll likely break the trip down into a photographic journey and share stories based on some of my top images but here’s the overall skinny…

First, the trek wasn’t as difficult as I had expected. My greatest fear was that I (or Jon) would have issues with the altitude and have to immediately descend and return home. That did not happen (although we did run into one group that had to descend because one of their team members was too ill to continue).

I was also quite concerned about a misstep on what, at times, was a pretty treacherous path. A slip and fall could mean a broken ankle, elbow or banged head and an emergency evacuation in a helicopter back to civilization. Luckily, that also did not happen.

The path demanded absolute concentration with every step. If Jon or I saw the other person fiddling with an iPod or turning around to see who was bringing up the rear, we would remind each other, “No multi-tasking!” While none of us fell, we all had close calls where we nearly 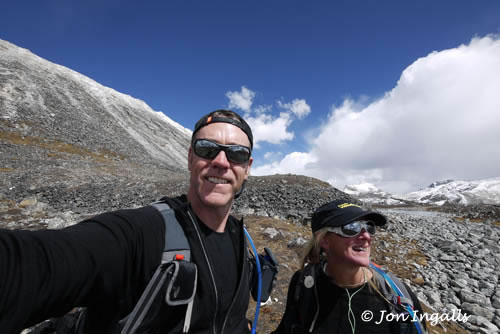 toppled over on the rocky and/or muddy terrain (see bottom image as an example).

We started with a small group of four but one of our team members left after 10 days when a large blister on his heel became infected and too painful to continue.

As I expected, I was the slowest in the group. On most days I didn’t mind this. But on days when it started to snow and the passes seemed never ending, I silently cursed our wonderful guide for saying again and again, “Camp is just ahead, Mam.” It never was. And I knew that. Sometimes it was another hour and, to me, that’s not “just ahead.”

Some days I walked in silence while on others I listened to music on my iPod or podcasts on my iPhone, always with just one earbud in so I could stay alert to potential dangers.

Most every day I wished for a hot shower. A proper hot shower. Not a bucket bath (which I was treated to just twice during the 25 days).

Once we hit pretty regular freezing temps and high altitude, I wore the same clothes–a long-sleeved Icebreaker merino wool top, Columbia hiking pants and lots of layers–nearly every day until I could wash them or really needed to make a change. 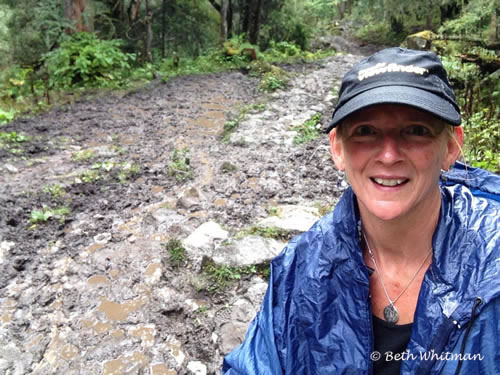 I loved being offline during the trek. No email. No social media. No deadlines. That kind of detox is dangerous because you can get used to it pretty quickly. (It’s also likely another reason why it’s taken me so long to write this post.)

It’s really difficult to “re-enter” after any trip and one in which you’ve been offline is even harder. To compound the issue, Jon and I went to Kauai after the trek and then I returned to Bangkok to meet up with a group to lead our Thailand and Laos tour. In total I’ve been away for nine weeks.

No, I didn’t really miss “home.” Mostly because I spent the majority of those nine weeks with Jon and, I suppose, “home” is where Jon is. Sure, it’s nice to come back and have access to all my favorite things (my blender for making protein shakes, regular workouts, and my closet full of too many clothes), but I don’t need those things to be happy.

Throughout the trek I asked myself if I would do it again. I knew it wasn’t a question to be answered during the trek. But when I returned to email and discovered a number of inquiries from people who wanted to join me for the next Snowman, it felt right to commit to doing it again. So… 2016 Snowman Trek, here I come! Want to join me? You’ve got plenty of time to get ready for it and I feel fairly confident I can provide you with a roadmap to success. 🙂