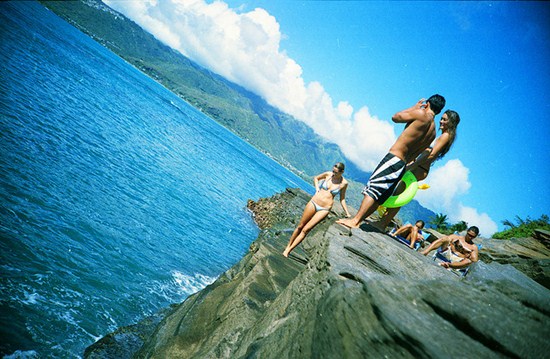 A Kauai native with dive gear and a surfboard, Raf lived in the ocean. He had the muscles of a merman and wide feet that resembled those on the seagulls he swam with.

I, on the other hand, grew up in the Midwest and then spent years in the west Texas desert where the closest thing to sea was the fossilized reef in Guadalupe National Park. I had the grace of an elephant and my scrawny feet looked like those on Kauai’s wild chickens.

Though I could swim, I was terrified of the unknowns hidden under the ocean’s endless, shifting surface. The knowns scared me too: dangerous rip currents, stinging jellyfish, body-crushing waves, and fang-bearing sharks, to name a few.

No one knew about my secret fear. An outdoorsy adventurer, I climbed mountains, scaled rock walls, went bungee-jumping and skydiving. I was not afraid of anything! Or so I pretended.

So when Raf asked me to jump off a cliff with him into that menacing ocean, I quickly answered, “Of course!”

Plunging Into the Sea
As we walked the plank, I mean hiked to the top, Raf pointed out his lobster dive spot by those “crashing” waves, explained how we would swim past the “sharp” reef out of the “danger” zone to the beach, and finally commented on a distant surfer catching a “killer” wave. I heard CRASHING SHARP DANGER KILLER.

Not even ships survived here!

The cliff felt a gazillion times higher than it looked from Shipwreck Beach. The ocean heaved and receded gently below, but to me it was breathing deeply, ready to suck me in, chew me up, and poop me out so far from land that I’d be lost at sea forever.

But, my reputation was far more important than safety. Before Raf could notice my shaky knees, I feigned excitement and leapt off the cliff.

After an exhilarating fall, the ocean spanked my behind and pulled my bikini-bottom into a painful wedgie. I glared at the punishing sea.

With a splash, Raf joined me in the water. The ocean either loved Raf or felt bad for bullying me because it quickly changed its behavior. Gentle swells lifted us delightfully up and down as we swam toward shore; and when we neared, the waves gave us a thrilling ride in to the sand.

I had not been lost at sea. Yet.

“How about snorkeling tomorrow?” Raf offered.

Looking Into the Sea 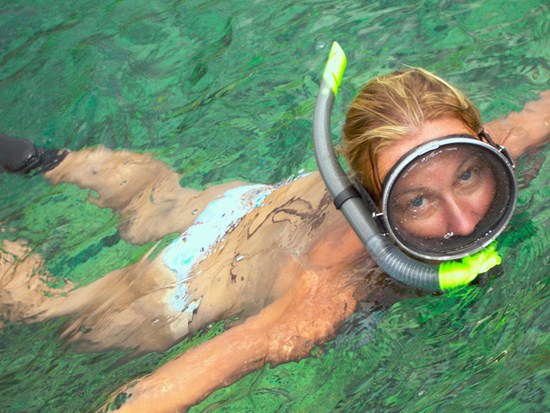 “My friend gets nervous snorkeling without a life jacket,” I told Raf, watching his reaction. My pride kept me from sharing that I was that friend. When snorkeling, I’d always worn a puffy fluorescent vest to make it harder for the sea to kill me and easier for body recovery teams to find me if it did.

“Do you want a life jacket?” He didn’t look up as he unpacked goggles, fins, snorkels and toothpaste. Raf often dove deep for lobsters and speared fish with this same gear. By himself. At night. Surely I would survive holding this merman’s hand in broad daylight, shallow water and with lifeguards lining the shore.

“No. I just wondered if you ever get nervous in the water.”

“Not really. I respect the ocean, but don’t fear it.” Then he told me of his near-drowning experiences (plural!), bloody surfing injuries and tourist-in-trouble rescues. “In fact, look there. See the current pulling those people between the break in the reef? They can’t get out from over there.” He studied the current and the waves. Maybe I did want a life jacket.

Would I get sucked under? Did I need a flashlight? He ignored my anguish and calmly explained our safe snorkel route as he skillfully smeared fog-preventing toothpaste in our goggles.

“They say toothpaste repels sharks. I use it when diving ever since a shark took a bite out of my friend’s lobster bag.”

I had been slathering on sunscreen when I should have covered myself in toothpaste! Before I could reach for the tube, he grabbed my hand and we splashed into the sea.

I immediately forgot my fears. My goggles became a window to more wildlife than I ever saw on land. Raf dove down to look for eels and turtles in the reef’s crevices. Long, slender needlefish appeared to whistle at me near the surface, while curious colorful tangs and butterflyfish came close enough to inspect my eyelashes. I tried to imagine a mountain hike surrounded by so many colorful animals.

Then, faster than you can say humuhumunukunukuÄpuaÊ»a, we finished the route through the reef. I wanted to go again!

“Ready to try surfing tomorrow?” Raf asked. It was like Michael Phelps offering me a private swim lesson.

Paddling Into the Sea 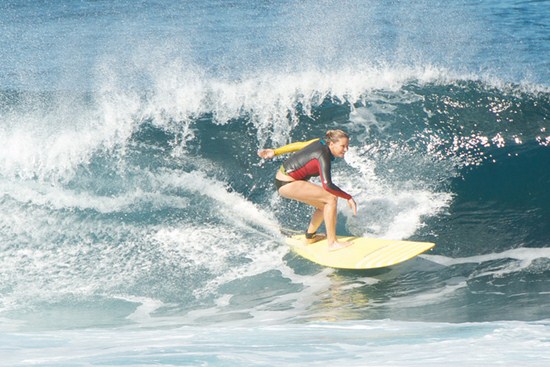 “Where are we surfing, Raf?”

Why oh why was I doing this? I know a surfboard floats, but a string attached to my ankle will not save me from drowning underneath it. If the sea can swallow the Titanic, it can certainly devour a 7-foot piece of foam. Even solid things were dangerous in this sport; I’ve heard about board-inflicted broken noses and horrific reef scars.

“Never mind.” I decided not to bring up wearing a life jacket, a helmet with facemask, or a suit of armor coated in toothpaste. The water looked non-threatening enough, almost like a surfer’s kiddie-pool. Little girls were learning without life jackets while their adjacent instructors stood in gentle waves only waist deep.

I really did want to learn to surf. When he surfed, Raf glided across the waves with speed and agility. Despite numerous crashes ripping board shorts and skin, he emerged from the ocean grinning and refreshed every time.

The lesson started on land. Surfing on sand proved easy, even for a clumsy klutz like me. Stomach on the board, paddle, stand, surf.

I might have procrastinated more on the beach, but Raf carried the board into the water dragging my leashed ankle closely behind.

“Lie on the board,” Raf instructed.

Slip, bobble, tip, splash, slide, kick Raf oops, scoot… It wasn’t pretty, but I got on.

“When a wave comes, I’ll push you. Then, just like on the sand, stand up and ride it in.” Simpler than snowboarding, I thought.

His eyes studied the ocean, reading the waves. He straightened up quickly as a wave approached.

With a shove from behind I scrambled to stand on the moving board, and then splashed into the water. Yeah… like snowboarding on an avalanche into a lake.

I struggled and fell on wave after wave until finally, flapping like a startled chicken, I stood and rode a wave all the way in until I sunk as it lost power.

I did it! I instantly knew why Raf spent every spare moment on the board; surfing was addicting!

I paddled out over and over until I felt like a real surfer with arms of jelly from paddling, blood dripping from a reef cut on my leg, and a leash stripe tan on my ankle. The mischievous ocean stole Raf’s sunglasses and one of my earrings, but the elation it provided paid us back tenfold.

Diving Into the Sea 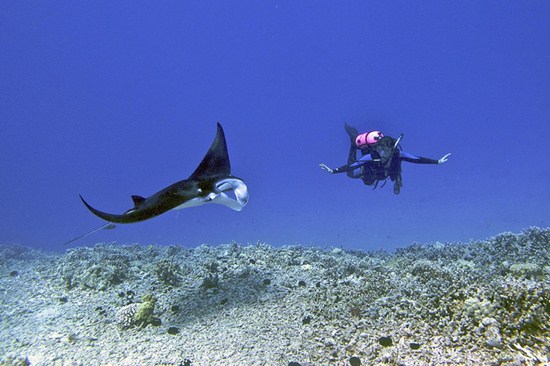 “How much weight do you need?” the scuba shop owner asked.

Weight? I had taken a scuba class in the pool, but never dove in the ocean. In addition to forty pounds of scuba equipment including air tank, BCD vest, octopus-like hoses, mask, snorkel, fins, wetsuit, depth gage and compass, I forgot we also had to wear weights to sink. I might as well tie an anchor to my neck and throw myself into the ocean.

I secretly texted my family a final “I love you,” while Raf rented the gear, just in case I ended up buried at sea.

Suited up, I stumbled awkwardly behind Raf into the surf, trying hard not to fall. I wouldn’t be able to stand back up with such heavy gear. In deep water, I was sure I’d plunge straight to the bottom, if Acid Drops didn’t dissolve everything first. Instead, the sea surprised me by kindly lifting the weight off my legs and back. Relief from floating turned to dread when I pressed the button to release air from my vest and sunk into the sea.

Instead of drowning, I felt weightless. We now floated underwater, gliding hand-in-hand through a three-dimensional world of aquatic life. A Spanish dancer fluttered alongside us and other critters emerged from the reef to watch. A sea turtle, awkward and clumsy on land, flew with wing-like flippers in front of us. For once in my life, I, too, felt graceful. I let go of Raf and relaxed, hovering upside-down. I watched bubbles float up past my feet through the blue, shimmering rays of sunshine to the surface. Even my hair danced elegantly around my face. Did Raf notice that I’d become a beautiful mermaid?

My mermaid dream was interrupted when I had to blow snotty air out my nose to clear my leaky mask again. Why did it keep filling with water?

Raf pulled me ahead pointing out sea cucumbers and parrotfish and a rainbow of sea stars. Quiet reef crackling sounded like hints of sparkling glitter in this otherwise silent, peaceful, dream world.

Why had I feared this place for 33 years?

We neared the shore as air ran low, and I fell to my knees in the sand with the return of gravity.

“I saw you clearing your mask a lot,” Raf said. “At first I was confused because it seemed to fit you well, but I figured it out. You smiled so much, your cheeks lifted the mask up letting water in.” 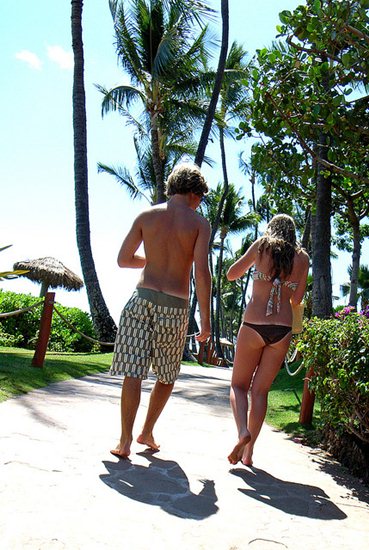 That evening, my last on Kauai, we sat on warm black lava rocks overlooking the water as the sun melted into the horizon. He gazed at a lighthouse guiding people to land, while I stared at the sunset’s reflection drawing me back to the sea.

“Why do you love the ocean so much, Raf?”

He thought for a moment. “I love the fishy smell, the salty taste, the sound of the waves and the way whitecaps dance under a full moon. The ocean is filled with diverse wildlife and deliciously fresh seafood. Surfing is exhilarating and the same surf spot is different every day. It’s free, exciting, calming and always changing. I love the ocean. I need the ocean. It’s in my soul.”

We began to kiss until a thunderous exhale startled us both. Then another, and another, until I comprehended the sea’s final gift before my flight home: Whales!

Delightful surprises, not scary unknowns, fill the sea. Raf, opened my eyes and heart to a world I had missed all my life. Hawaii is not only a stunning island destination, but also a magical doorway to the sea. And now, instead of running from my fears, I slather on the toothpaste and jump in.

“Hey, Raf, want to go skydiving when you visit me in California?”

I saw a flicker of hesitation in his eyes, and then a grin. “Of course!”

April Nelson is a travel writer presently disguised as a fuel cellÂ supply chainÂ manager in California.Â  Outdoorsy and cheap, she is obsessed with frugally exploring nature from mountain tops to ocean depths.Â  She hates peanut butter almost as strongly as she loves traveling, learning languages, and writing.