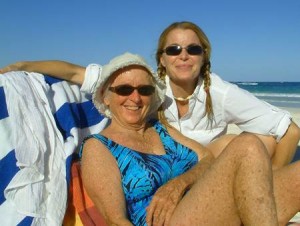 The little panga slaps wildly on the waves but Baltazar, undaunted, continues on full throttle. Salt water douses our faces and I fling an arm around my 77-year-old mother.

“I’m only afraid of small planes, not small boats!” my mother calls, above the noise of the motor and the wind.

“But still, this is getting ridiculous. I can’t even see Bird Island yet!” I shout back.

The panga bangs more sharply and I worry about my mother’s bones.

“Are there life jackets?” my mother asks.

A quick scan tells me there are none.

My mother and I came to be in this battered boat in the Bay of Ascension, because my father doesn’t like the tropics. My mother, on the other hand, lives to swim in a warm turquoise sea–as do I. So off we went, the two of us, to Mexico’s Riviera Maya.

My mother has always been a strong swimmer, so even at age 77, I trusted that she’d manage snorkeling with me, and would be game for cabanas with no air conditioning. She’s not a fan of all-inclusives, preferring simplicity and untamed places.

We pick up a little Nissan and head south from the Cancun airport on the carretera–the highway that runs from Cancun all the way to Belize. In spite of warnings about crazy drivers, I’m not bothered by the Mexicans making three lanes out of two.

In two hours we arrive at Villas Flamingo on Akumal’s Half Moon Bay. Our white two-story condo looks over a pool to a white curve of beach and the glorious bay with its bands of lapis and cerulean blue.

We trade sticky travel garb for bathing suits and step into a bathtub warm sea. We float and our minds become as calm as the bay.

Yal Ku Lagoon is a beautiful snorkeling spot, where fresh water meets the sea at the north end of Half Moon Bay. We arrive at 8:00 when it opens and find a locked gate, but by 8:15 a boy arrives by bike and lets us in. 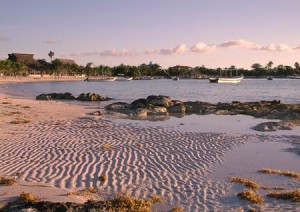 Translucent blue green water is edged by black rocks, which are adorned with wonderful malachite-colored sculptures.

I help my mother with her mask and stay near her in the water. “I’ve never gotten a cramp,” she tells me.

But I lift my head frequently to check on her.

Half an hour later I see her floating face down, not moving. This is normal when snorkeling, I tell myself as I quickly swim closer.

She turns to give me a thumbs up and a grin. Schools of yellow sargent major damsel fish surround her, shimmering past her mask. We point in unison to a neon pink and green parrotfish.

“Floating in that world! It’s as relaxing as a massage!” I say.

“Better,” my mother replies, as we head to the car.

I’m eager to see turtles so we drive the short distance from Half Moon Bay to Akumal Bay. From May through October, the Loggerhead and the green sea turtle nest on the Akumal Bay Beach, coming all the way from the coasts of Europe to lay their eggs on this exact beach where they were born.

We swim back and forth in the flat bay for twenty minutes scanning the water. We’ve almost given up when we see one. It is about five feet below us, its head pointed down, nibbling the grasses on the sea floor, its body floating upward. Beautiful bursts of orange patterns fan like flames on its shell. Another turtle comes into view and appears to greet the first.

We remain silent above them, feeling the primordial pull of the marine life and the diaphanous sea.

After three nights, we head to the bohemian beaches of Tulum and my mother’s first cabana experience. We are delighted with our cabana at Zulum; the lacquered wooden steps lead up to a room with a bed that hangs from the ceiling. The tropical wood and palapa frond roofs remind me of Robinson Crusoe’s house in Disneyland.

That evening at the bar, I chat with the manager about the development of the Mayan Riviera.

“We’re lucky in Tulum because we’re in small strip between the ruins and the entrance to the biosphere reserve. New zoning laws have been put in place here with densities of 5 to 25 rooms per acre, less than half of what’s allowed in Cancun.”

“No one wants another Cancun?” I question hopefully.

“Let’s hope not!” he responds. “But in spite of the Mexican government’s acknowledgment of overbuilding in Cancun, the development of this coast is being promoted.”

Before Cancun was sacrificed on the alter of tourism, it was an important nesting site for birds and five species of sea turtles and its lagoon was a haven for marine life. Sections of the lagoon were filled for golf courses, dooming the lagoon’s fragile ecosystem. The manatees fled, the lobster population was decimated, and the surrounding rainforest was destroyed.

Not to be missed in Tulum are the ruins from Tulum’s heyday when the Mayan’s advanced civilization included impressive architecture and sophisticated mathematical systems. Apparently they were among the first to invent zero.

It’s the most picturesque archeological site I’ve ever seen. Standing proudly on a cliff looking east over the glorious turquoise sea, it was called Zama by the ancient Mayans, meaning City of the Dawn.

Punta Allen, a small fishing village south of Tulum, is our last destination.

The pavement ends and the car rattles over washboards. I have heard that we’ll run into potholes and thick sand, and that the 50 kilometers would likely take three hours. 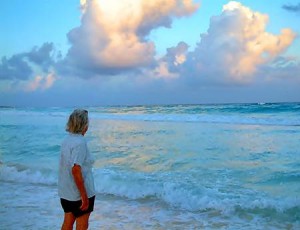 The air conditioning stops working in the car as we head into the biosphere reserve.

“Just to show us that we’re leaving civilization behind!” my mother says.

Sian Ka’an (Where the Sky is Born) is the name the Mayans gave to the southern portion of Quintana Roo. Now the name Sian Ka’an designates the 1.3 million-acre biosphere reserve that begins where Tulum ends. The reserve, created in 1986 and designated a World Heritage Site the next year by UNESCO, is home to hundreds of species of birds as well as jaguars, spider monkeys, manatees, dolphins and sea turtles.

The potholes aren’t bad but the sand is thick. I intuitively step on the gas, shoving the little Nissan through and hoping for the best. After two hours, we arrive in Punta Allen, hot and jubilant.

I guide the car down a sand street looking for a sign to Cuzan, where we’ve booked a cabana. When we see the sign, it points us to where the sand road runs into the sand of the beach. Where’s the guest house?

Exiting the car, we wander toward some Mexican men by a fishing boat. I ask for Manuel.

“Who, then should I be asking for?”

Who and where might Juan’s girlfriend be is lost on me until a young American gal strolls up wrapped in a sarong.

She waves to a small, round palapa structure, which turns out to be the Cuzan restaurant. “We’re over there.”

My mother and I plunge after her through the sand to a row of cabanas crammed together, a block back from the beach.

Our cabana has a porch with a hammock, a floor of two-by-fours and a simple bathroom. There are dead bugs on the floor and an upside-down cockroach in the shower. I ask The Nobia de Juan for a broom. When she brings one, I figure she’ll sweep the place herself, but she hands it to me. She says she’ll bring us purified water, but the water never appears.

“She’s not well-suited for hospitality,” my mother observes.

While Tulum is sure of itself, ensconced in its bohemian Euro-flair, the settlement of Punta Allen lacks distinction. I am reminded of Macondo in One Hundred Years of Solitude, a town condemned to isolation.

What had I pictured? One or two paved streets with pink and white homes sprouting bougainvillea and a few shops, tucked into the spit of land between the sea and the Bay of Ascension. Instead the main street, if it can be called that, is deep sand. A scrubby patch of grass to one side acts as a playing field and a small, white cement building is the least ambitious church I’ve ever seen. Small mongrel dogs sprawl flat-bellied at the feet of husky women who stand in doorways, their mahogany faces shinning in the heat.

The sand seems it could cover the settlement any time–rise up like Hitchcock’s birds and pour through open doorways, roar over walls and submerge palapa roofs.

The Bay of Ascension

We have come to see the biological reserve and the way to do this is by motorboat or kayak. Cuzan doesn’t have kayaks and the Nobia de Juan directs us to Vigia Grande, a nearby hut, offering boat tours. The girl in the hut looks no older than twelve. She tells us about a tour around a lagoon that includes “Bird Island.” 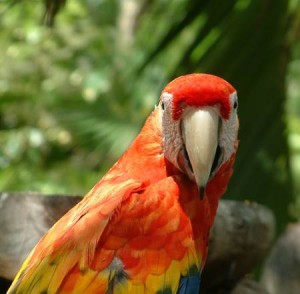 A Dutch couple joins us and as soon as the four of us are seated in the open boat, Baltazar our guide takes off at a muy rapido pace, flying up the coast to lagoons tightly encircled by black mangroves. He shows us frigates, cormorants, osprey, blue and boat-billed herons, and a stork on a huge nest.

Baltazar’s English is limited and upon hearing my attempts in his language, he dictates to me and commands me to translate to the others, but my Spanish is not good enough to discuss the finer points of birds and mangroves.

“Ahora, Bird Island!” he says, thrusting the boat at full speed into an agitated sea. The farther we go, the more the boat bangs up and down. My mother and I look at each to other as if to say, this is a bit wild but what the heck.

As it gets rougher, we start scanning the horizon for the island. If it’s near by, we can tolerate a few more minutes. I finally see the dark outline of the island. It’s still very far away.

I turn to the Dutch couple with a query on my face.

“It’s a bit rough!” The Dutch girl gasps as she clings to the boat’s side while surges of spray wash over her.

After my mother’s question about life jackets, I make the executive decision to tell Baltazar to turn around.

As we near the coast he runs out of gas. Luckily we’re in calm water. He radios the office. Someone comes and Baltazar siphons gas.

“What,” my mother says with horror, “would have happened if he’d run out of gas out there on the high seas, and with NO life jackets!”

We leave this place of Hitchcock sands the next morning and as we pull into Tulum, mopping our cleavage with sarongs, my mother suggests jumping in a cenote.

The large round pool of water is a mix of emerald green and cerulean blue. We drop into liquid perfection.

Swimming up the mangrove-lined canal that feeds into the pool, we admire birds with long yellow legs, picking their way through the roots.

The canal turns a corner and we follow. All is silent and foreign.

“Are there crocodiles in cenotes?” my mother asks.

We share a wide-eyed look and swiftly turn and swim the way we came, the current depositing us safely back to the limpid pool where we climb to dry land, laughing.

Chandi Wyant is a historian, writer, educator and seasoned traveler. She speaks Italian, has lived in Italy twice and has a Master’s Degree in Florentine Renaissance History. While she is enamored of Italian history and art, she also loves the tropics and laid-back beach scenes. Her favorite place outside of Italy is Mexico’s Mayan Riviera. She currently teaches college history in Qatar and collects stories from travelers and expats on her website, Paradise of Exiles.

All photos by Chandi Wyant.