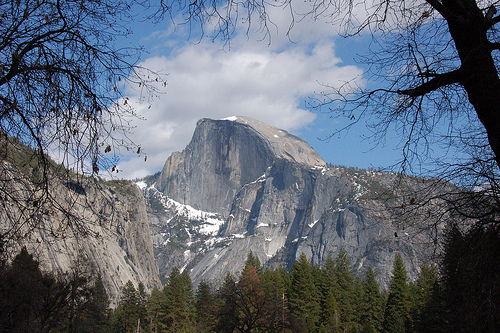 The granite steps to Half Dome proved a way to weed out hikers who had already put in six hours on a steadily climbing trail. Some weren’t even steps, just slabs of rock to scramble up.

“Are you kidding me?” a fellow hiker asked, stopping to catch his breath.

“This is no joke,” agreed the woman in the West Virginia t-shirt.

I looked back for my dad. Face blank and streaked with sweat he was methodically making his way. At 63 he was the oldest of the hikers we met that day.

Half Dome is the symbol of California’s Yosemite National Park and a granite face I had looked up at for over 20 years since first visiting the valley as a child. The trail climbs from the valley into the woods and waterfalls behind Half Dome before an ending climb up the side of the dome. In all, the hike is 17 miles round trip with an elevation climb of 4,800 feet.

I always wanted to do the hike. And I had always wanted to go with my dad. He was the one who pulled my brother and me out of bed on weekend mornings and drove us to the mountains, intent on showing us the outdoors even when we would have preferred the sleep.

This hike was meant as a thank you, although as we trudged up the granite, it seemed more like a punishment. My quads and lungs were burning. 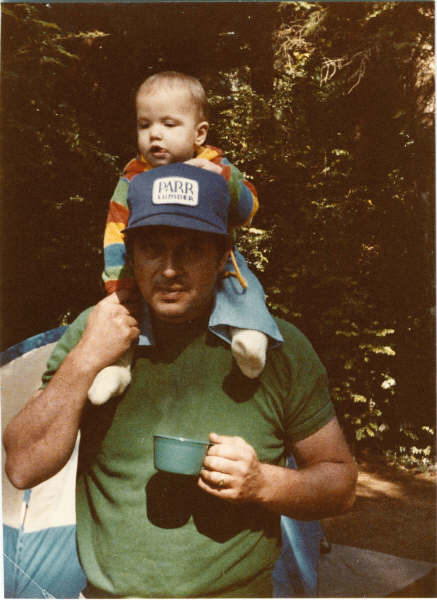 We had almost bailed on the hike the day before.Â  The late spring weather was rainy and a thunderstorm was forecast, not ideal or recommended weather for sitting on top of an unsheltered rock. We considered staying an extra day, but I was due back home in Boston by the end of the week. I had been looking forward to the hike for years. It would take a lot of lightning to keep me down.

We woke up at 5 a.m. after a restless night listening to the hard rain on the canvas roof of our cabin. Dad said it didn’t look like the day and rolled back over. I said it would be better to have a miserable hike and turn back knowing we tried rather than to stay on the valley floor and see the sun come out. For once, I was the one urging my dad to get out of bed for a hike. Outside we found the morning wet but no longer rainy.

We hit the trail by our cabin at Curry Village, a short hike from Happy Isles and the head of the trail. We soon ran into Penny, Dave and Sue, the first of many groups we met on our way up.Â  With each new group, we exchanged names, hometowns and a promise to meet at the top.

Dad and I were alone at first since we chose the longer John Muir trail rather than the steeper Mist Trail. The morning was sunny and dewy. Through a parting in the trees we looked across at Upper and Lower Yosemite Falls as they cascaded over the rock and emptied into the mist-covered valley.

Dad called himself the turtle, partly for his bright green rain jacket and partly for his motto: Slow and steady wins the race. I liked to use my momentum to push me to the top of the next hill or the next curve where I waited for Dad to appear. We would reconnect, point out a deer or take a picture and then push on. 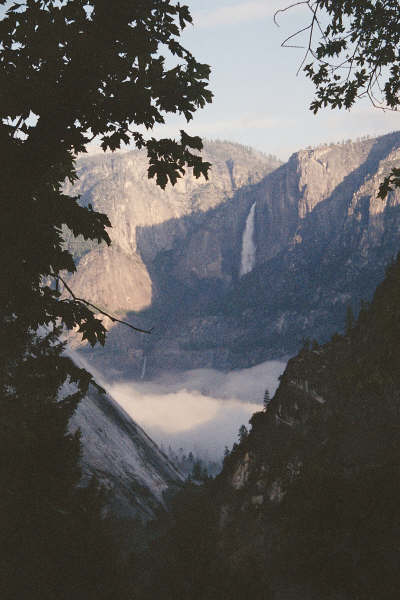 The trail went up, but was less steep than I had anticipated. I thought of doing the hike every year, it was so nice and beautiful. I imagined the granite steps as some mythical staircase into the heavens. My dad smiled. He had done the hike before and knew what we were in for.

The trail turned steadily steeper and our boots heavier until we finally reached the granite steps. People gathered at the bottom to rest, drink water and remove jackets. Pushing ourselves up the granite was one laborious step after another. No one had to say it, not that we had enough air to speak, but we did it because we had come too far and we wanted too much to get to the top of that rock.

The steps took my last bit of strength, but I got my reward — a view of Half Dome. Half Dome from the valley looks like a big dome was spliced in half, leaving an exposed face to look down on Yosemite Valley. The trail goes up the curved side of the dome.

I was glad I hadn’t needed my arms so far because I would need them now. It was time for the cables.

The cables are an old system of getting up the last bit of the hike to the actual top of the rock. Two parallel lines of metal stanchions are placed into holes in the granite and a cable is run through them. Pieces of wooden board are put across every few sticks as resting shelves. The climb is a 45 degree angle at some parts as you pull your body up the side of the mountain.
What is remarkable about the system is how unsafe it seems. The confidence to go up it did not come from any faith in the wobbly stanchions, but from a group mentality that it must be safe if so many others are going it.

Not everyone thought so. Many ended their hike at the bottom of the cables.

Clouds were rolling in. I looked around for my dad, worried we wouldn’t make it up before the thunderstorm. He appeared finally and urged me to go ahead.

I fished my gloves out of my pack, put them on and started up. 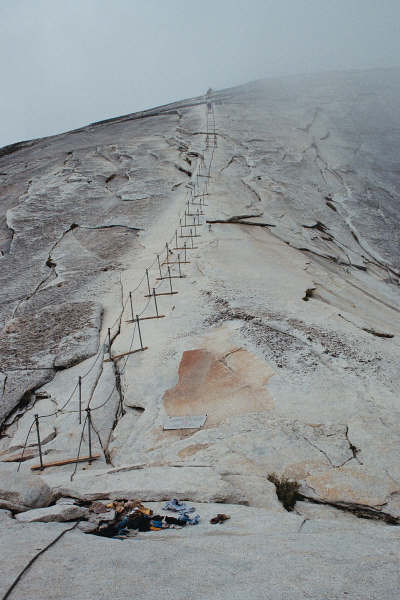 The first thing I discovered was that Dad had lied. The cables actually were as bad as they looked. I slowly pulled myself up the rock along with a long line of others. I strained with every ounce of every muscle.Â  People coming down tried to give encouragement — the worst is over, almost there. I mostly cursed the rock and my pitiful biceps.

At last I heaved myself onto the top and plopped down to wait in the fog that had now covered the rock.

I began to worry Dad had decided not to come after all. I started to ask others reaching the top if they had seen a guy in a green raincoat. Had anyone seen the Turtle?

Just as I was about to head down, there he was pulling himself up the last few stanchions, his face visibly straining, his green coat wrapped around his waist.

A man in the group before us declared, “I bet I’m the only guy up here over 60.”

“I’m 63!” my dad called out as he caught his breath. He got some pats on the back from strangers and a hug from me.

We had made it.

I hurried over to the edge. Absolutely nothing. A white fog covered the entire valley.

But the party at the top would go on. We busted out our peanut butter and jelly sandwiches.Â  A couple of guys put beer in a patch of leftover spring snow. Another offered shots of 40-year-old Jim Beam from a flask. We caught up with Penny, Sue and Dave.

I felt a tap on my shoulder, and a woman asked me to take her picture. The clouds had shifted.Â  There was the river and the tiny trees.Â  I could see the steep rock rising from the walls of the other side of the valley. I just had time to take her picture before the clouds rolled back over.

As the cold settled in, a line of us started the climb down the cables, easier on the arms but tougher on the mind since the gaze is straight down. The edges of the rock led into foggy nothingness. Gravity pulled me down to the last of the cables.

“The turtle made it,” someone cheered as Dad stepped off the cables behind me. We looked back and up in satisfaction.

The hike down was slower. We got caught in the rain, but laughed it off as we heard distant thunder. We weren’t on the rock anymore. Dad’s legs really hurt by this time.Â  As others hurried past and down to shelter, we took our time. Near the bottom as the trail merged with shorter trails people asked how far we had gone. 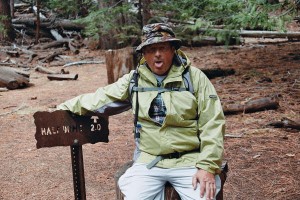 I had expected the feeling of accomplishment at the top, but the pride came at the end as I looked back up. I realized that for the rest of my life whenever I stood at the bottom I would know what it felt like to stand on top. The mystery of the trail was replaced by memories.

I thought about all the hikes when my dad put up with our dragging feet and complaints. I remembered catching my first fish, seeing my first bear and learning the feel of the earth beneath a sleeping bag because Dad thought these things were important and wanted to share them with me.

“Well, Honey, I’m proud of you,” my dad said as he put his arm around my shoulders. “The weather looked so bad. It looked like we weren’t going to make it, but you said we should go. We never would have gone up if it wasn’t for you.”

But I knew we were really there because of him.

Drake Lucas is a former newspaper reporter who is now a freelance writer based in Brooklyn. She has traveled to over 20 countriesÂ and has learned thatÂ missing an airplane can be the luckiest of mistakes.

Photo credits:
Half Dome through the trees: AmandaWalker
Drake and Dad photo by Judy Lucas
All other photos: Author