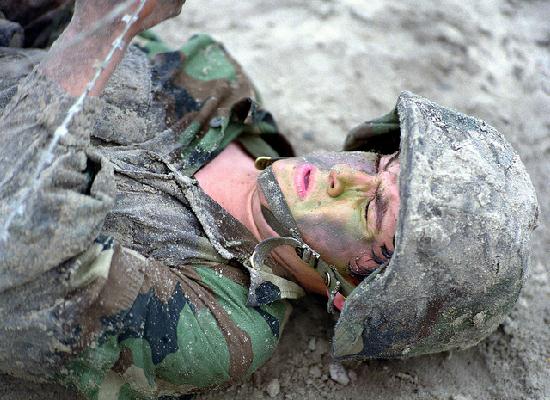 It’s 90 degrees and I am lying on my back in the sand while a six- foot tall man who is reputed to have blown up ships in enemy harbors and tracked Taliban in high mountains, is shouting a machine gun fire blast of orders in my face. “I said ‘sit up’! I said ‘ten more’!”

That would be ten more sit-ups with a 30-pound sandbag on my chest. Though my tormenter is kneeling down with his face only about six inches from mine, his features are blurred because: a. I don’t have my reading glasses on and b. my eyes are full of salt and sand from the two hours I just spent crawling on my belly through the sand and swimming in pounding surf in fatigues and jungle boots. I and 25 other merrymakers (all of whom are half my age) are in Navy Seal training. Okay, not exactly “in” Seal training. Along with my robust young colleagues, I am in the faux variation of Seal training. Each for our own reasons has chosen a compressed version of Navy Seal Hell Week as a vacation. Welcome to the Seal Adventure Challenge. 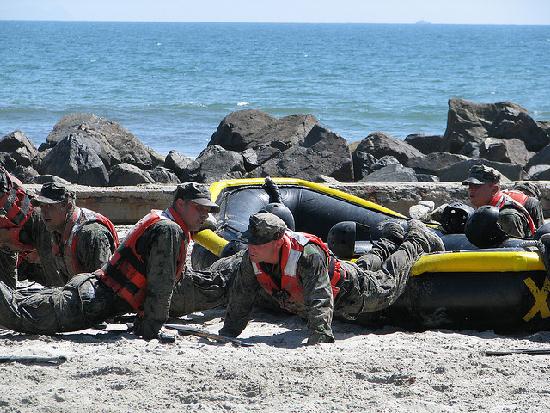 Seems we are not the only Americans forsaking Caribbean all-inclusives in order to do time in hardcore settings. While the American waistline is expanding, apparently so is our taste for the more brutish boot camp vacations. Call it the Code Orange effect, but now there’s SWAT team training in a luxurious resort setting in Idaho, a few fun counter-terrorism wilderness survival vacations and even some holidays that feature a relaxing bit of G force and zero gravity in jets and rockets. These adrenaline adventures – or special ops-lite getaways – may not replace Napa and Tuscany wine tours, but they are increasingly popular.

A little wine tour in Tuscany or better, a simple cappuccino in Rome is, in fact, just what I am in the mood for after the first four hours of a work-out that started at dawn and included running through tangles of thorny vines, in deep sand and on grass, asphalt and gravel punctuated by intermittent commands to “Drop!” (as in “to the ground”) for great numbers of pushup punishments for mysterious infractions. Only hours in, it seems as if days have passed. But wasn’t it just yesterday my daughter dropped me off at the airport in Boston?

As I checked-in for my flight to Norfolk (proud home of all things Navy), she ran back and handed me something. “You forgot your lipstick,” she says, throwing me a kiss. I salute. She laughs and drives away. Turns out I will have no use for lipstick and will learn (note bene) waterproof eyeliner isn’t. 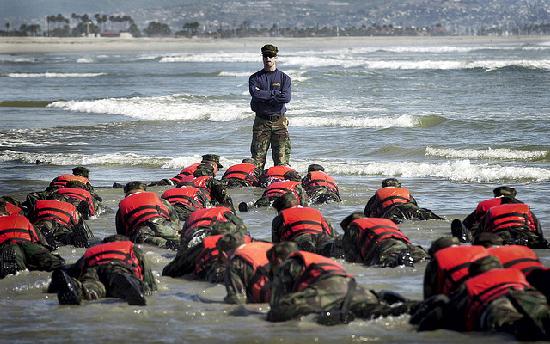 Holidaymakers like me have two choices of the Navy Seal escapade. One is a Hell Week, seven days of land and sea combat training including a 13,000-foot parachute jump. The other version, sans the mid-air helicopter frolic, boasts 24 sleepless hours of hell. I sanely choose the latter, but what kind of vacation is only 24 hours? Well, the event itself may be short but the trip really is launched the moment you sign up. And best start at least six weeks before you arrive at Camp Story in Norfolk, Virginia because six weeks is the minimum time any normal human being needs to prepare for the challenge.

Preparation for this vacation begins, not with reading Fodor’s but with poring over a fifty-page tome of exercises by Seal trainer, Stu Smith. His brutal daily regimen is intended to get all “recruits” in shape to meet actual minimum Seal standards. This isn’t your Pilates, yoga or spandex crowd workout. It is a combo of pushups, pull-ups, sit ups, jumping jacks, running and swimming under and over water while breathing as little as possible Think Jack Bauer, Rocky Balboa. Think GI Jane. Pre-dawn Spartan runs, military presses, and combat swimming stroke became my life for almost two months. Every day from 6:00 am-8:00 am I was on “vacation.” 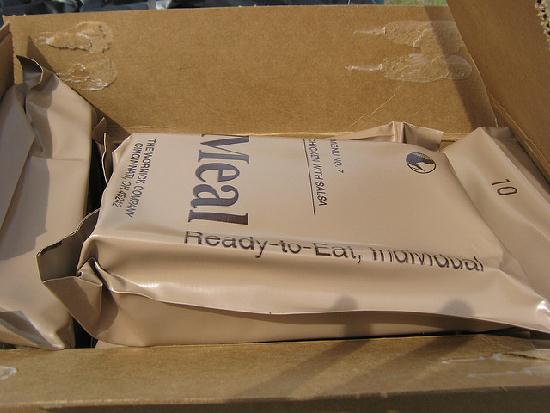 Although not part of the official Seal holiday curriculum, in the evenings when my friends were at outdoor cafes or taking in foreign films, I complimented my “vacation” package with audiovisual training. I studied all the seasons of 24, every Rocky film and, of course, GI Jane. While traditional vacations mean weeks ahead shopping for beachwear, checking out the merits of various camping stoves or boning up on Conde Nast suggestions for fine restaurants at your chosen vacation spot, I weighed the merits of various army issue boots and MRE’s (meals ready to eat), and shopped for the vacation wear on a list sent to me by the Seal folks (Lesson 1: Cammies are not camisoles, but camouflage uniforms). Nothing, however, prepared me for the Seal encounter.

The 24-hour challenge is divided into physical training for land and water operations, combat training and an intelligence-gathering mission that takes place at hours when all good citizens save newborns and 21 year olds are sleeping. 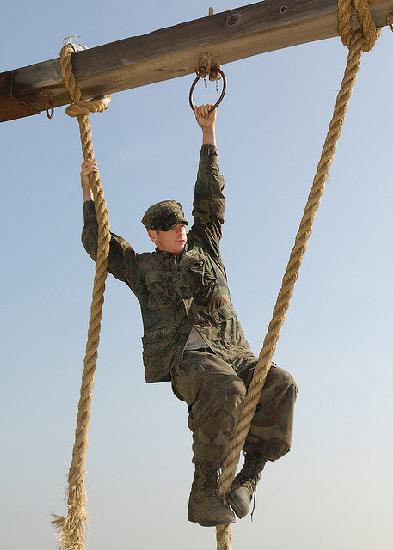 I am at best, what the French call une femme d’un certain age, occasionally a little stylish and my motor still runs. At worst, call me a sludgy late boomer. Truly I am a late bloomer boomer because had I only known, I would have taken this challenge on decades ago as have the three young women who are suspended on the pull-up bars in front of me, fatigues still sandy and soaked from an earlier adventure. After a splendid performance of one pull-up with assistance, in a generous ‘save face’ gesture, I have been assigned to keep track of how many each of the other recruits has done. 25-year-old Icelander, Gigja Arnadotter, casually executes 15 pull-ups, and Niki Anderson, a determined young woman, does 12 without a hair out of place. About half of my colleagues here are either about to go into the Navy or seriously considering it, like my pushup partner T.J. Weaver (who executes 110 pushups and kindly cheers me through my huffy puffy ten) and 17-year-old Andrew Danskin (“I’ve wanted to be a Seal since I was five.”). They’re here to do a run-through of what they will actually face in Seal training. The others, a mix of extreme sport types, are, strong, gracious and graceful young people, like 24 year old Virginia firefighters Hank Charles and Nathan Demaree who came “to break up the monotony” of rescuing folks in burning buildings.

Half a day in and temperatures soaring we have learned to march, halt, execute sharp turns left and right and yell, very loudly, for some reason that eludes me, the word “hooyah!” at various intervals. We have crawled in the sand and on rocks, tread water with our hands tied tightly behind us, dragged bricks, mannequins and each other many lengths of a pool and eaten nothing. No one has quit despite a welcome talk warning from Don Mann, one of our instructors, (a legend among special operations types) that “Some people will cry. Some people will vomit. Some people will get hurt.” So far only one person has vomited and imagine that? It wasn’t me. 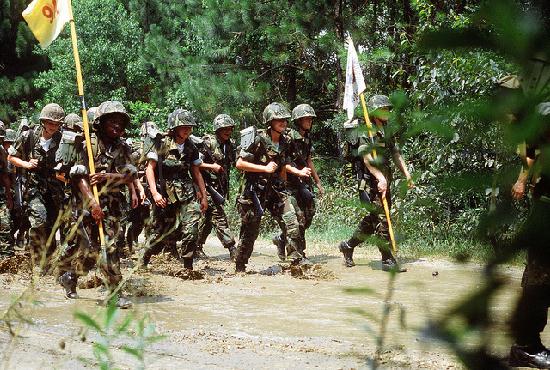 Late afternoon involves swimming in surf in our clothes, a two- mile run to something called Hill of Doom, a 70-degree climb 100 feet up in sand, followed by more than a dozen obstacles to race over under and fall from with my favorite, #11, a two-story high wall to scale. I falter, fail and fall while the buff and brave bolt and leap over anything that gets in their way. I, like a proud mom of them all at a middle school soccer game shout out “Bravo” over and over as they fly by me.

As the sun sets and whippoorwills and crickets kick in, we finally eat, swatting mosquitoes and ripping open our MRE’S – plastic sealed sacks of pressed squares of meats and cubes of carbohydrates called “meals.” My very youngest companions, still boys and soon sailors, gossip with teen glee about Seal legends who “cough up blood” and whose “lungs explode.” A few more people vomit and a couple of thirty-somethings here for a break from raising kids just pass out, heads on a log or just on the ground.

I use the few minutes to remove my boots, which I’ve grown to hate more than the “bad guys” we’ve been training to decimate. My socks are bloodstained and for a moment in my great fatigue and minor pain, suddenly and unaccountably, I felt a deep sadness for the real young troops sitting on the ground somewhere in Anbar or Basra. 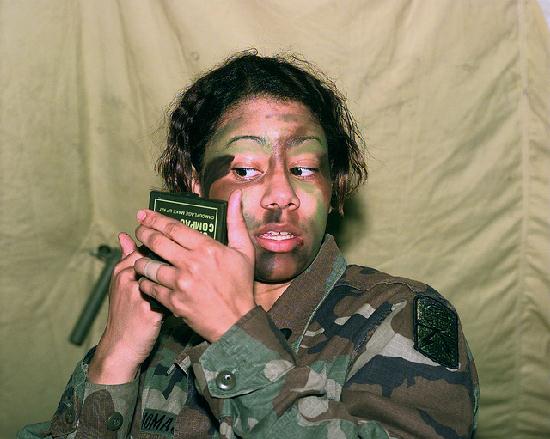 It is night and we do pushups by moonlight in the piney Virginia woods. Close to the ground I smell the earth, and the air is full of the odor of honeysuckle. In small groups under the guidance of Seal instructors, we paint our faces the colors of the forest, learn to walk silently, duck, hide and set up a perimeter. We head out into the dark on patrol, running, tangled in vines and crawling on our bellies in the dark woods, a reconnaissance mission pursued by “bad guys” in trucks and on foot. No light save the almost full moon. Silence except the crack of boots on branches and the whippoorwills.

We locate the enemy helicopter. We decode and report their plans to harm us. It’s dawn and Alpha, Bravo and Charlie companies can now go home. There is some learning in this adventure beyond whether you have the bulk to lift heavy things. Instructor Don Mann, when not shouting orders, pelts us with encouragement. Often the kind of motivational patter that I am only bemused by, but at the end of my 24 hours of a month’s worth of Seal training, one thing Mann said sticks with me. “You can be 10 times more than you think you can be.” I’ll keep that. Worth the bloody socks and 250 bucks.

Judith Ritter is an award-winning independent radio and print journalist whose reports from Canada, China, India, Europe, the Caribbean and the U.S. cover travel, science and technology, business, entertainment and international development.

Her stories have aired on public radio programs in the US and Canada and her print stories have appeared in places such as The Globe and Mail, The National Post, The Boston Globe and South China Morning Post.