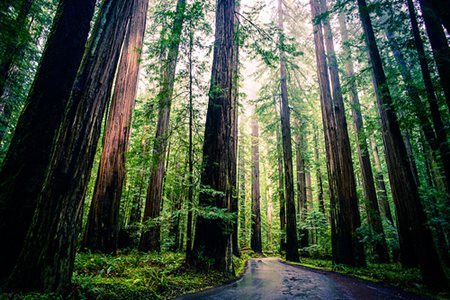 “The redwoods, once seen, leave a mark or create a vision that stays with you always…from them comes silence and awe. The most irreverent of men, in the presence of redwoods, goes under a spell of wonder and respect.” – John Steinbeck

As we drive along the Redwood Highway, I am reminded why so many great writers, the likes of Steinbeck and Muir, found their voices in the forests of Northern California. The storytellers that came before them told of mountain myths – tales of Big Foot, of bearded men gone wild, of Paul Bunyan and his blue ox, and of changelings whose legendary roots arose from the Native Americans who first walked here. Like the imaginations of those first storytellers, the pens of subsequent writers have sought to capture the way the soaring redwood pillars create a sanctuary of wood and lichen through which shafts of sunlight pierce the still chill air.

This part of California isn’t the place to fly in, stay in a hotel, hit the hot spots and fly out. Rather, this is a place that invites a more meandering, contemplative style of travel, the type characterized by wood fires in weathered cabins, of getting lost down gravel roads and of spontaneous early morning walks. 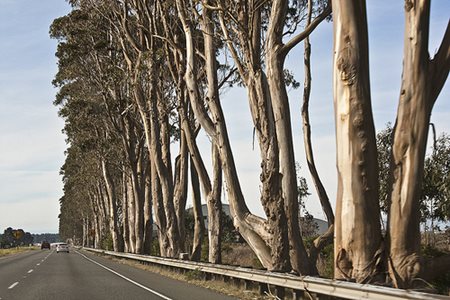 My partner Josh, who knows these parts from his childhood, tells me that the best way to travel north is by car. You can fly or ride by train, but the drive allows you to see for yourself the way the land transitions from the dry orchards of the central valley to where the horizon darkens with the redwoods. Driving also affords us the freedom to divert down one of the many side roads that split from the highway at random intervals to plunge into the trees as if part of some immense maze. Abandoned bridges and flashes of creeks can be glimpsed in the shadows, contributing to the mystical qualities of the region. I feel as though I am entering a kind of private Eden, one that keeps its secrets close.

Once we reach them, the coastal towns of Eureka and Arcata (first established for logging) prove themselves to be ideal leaping points for further exploration of the far North. Home to reclusive retirees, dreadlocked vegan students and bestowed with the dubious distinction of being the pot capitals of California, a trip to these towns is like buying a ticket back to the ’70s. Locals, nursing glasses of stout at one of the many microbreweries scattered throughout the area, inform us that the best time to see the redwoods is right after the rain. The rain brings the red out of the trees, intensifies it into a rich auburn. Luckily for us, it is late autumn and mist and rain as fine as sea spray is carried on the breeze. 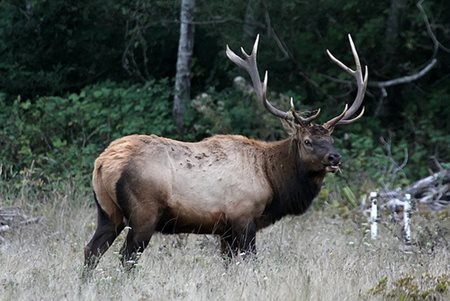 From Arcata, we get back on the Redwood Highway and follow it north again as it twists to trace the coastline. There are numerous places to pull over and admire along the way – from marshy Clam Beach to Big Lagoon. Josh says that at low tide it is possible to see the silhouettes of elk walking across the beach as the sun sets.

At Stone Lagoon, and the tiny nearby town of Orick, old buildings with driftwood fences, worn grey by sea and mountain air, advertise horse riding, kayaks for hire and sculptures carved entirely by the most important tool in the region – the chainsaw. The shopfronts are arranged like shrines to this tool and its redwood bride.

State parks are not in short supply out here, and it is within these (from Trinidad Beach to Prairie Creek) that we best get to experience the redwoods up close. There are three types of redwoods worldwide, and these, known as the Coast Redwoods, are the tallest and can live for over 2,000 years, earning them the name of “ever living trees.” 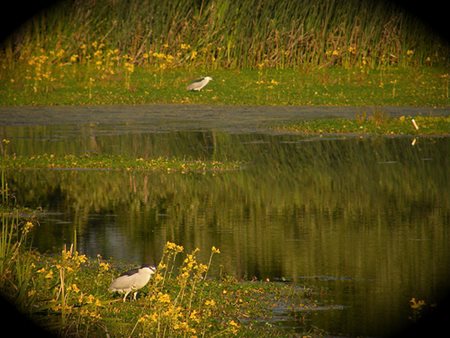 We see one young tree whose bark has been torn into thick strips by a black bear in search of the sugary sap beneath. The redwoods can survive even this. Elk dwell in the hollows and valleys. Their tawny coats blend with the meadow grasses, surprising visitors when they emerge suddenly beside the highway.

As a birdwatcher I keep an eye out for the winter wren and the rare marbled murrelet. Near the Klamath River, we see a young bald eagle perched over the water, his head just starting to whiten. Behind him, the pale trunks of alders grow near the road, packed together tightly and draped with lichen. It is easy to forget that we are near the coast when immersed in the woods, but then the road makes a turn and we blink against the sunlight hitting limestone cliffs that rise from the beach. A mix of low fog and sea spray blurs the fractured coastline in the morning. The notorious Cascadia subduction zone just offshore is responsible for the upheaval of these cliffs and the broken mountains behind them. Giant rocks dot the beach, split open as if by a giant hammer.

The evidence of this region’s tumultuous origins contrasts with the sleek coats of seals and otters basking on barnacle-clad rocks, and the tiny pink and yellow succulents that grow within the cliffs’ cracks. 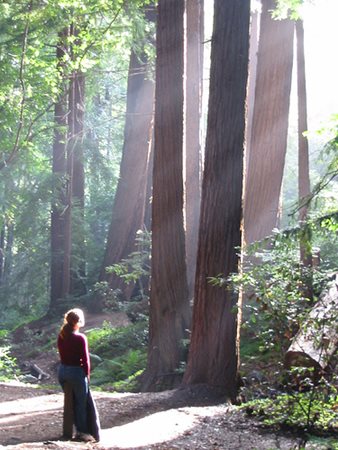 It is the memory of lunch under the redwoods that will stay with me the longest. We spread out blankets in a clearing by the road and eat cheese sandwiches, craning our necks back to glimpse the branches that taste the highest air. There is no wind under this canopy, and only the palest fingers of sun make their way down to us. Clover-like redwood sorrel and delicate fringed ferns pad the forest floor, and miniature brown fungi bloom along half-rotted fallen branches. Down one side trail there is the shell of an old truck sitting in a rare pool of sunlight. Its wheels, engine, and everything else not welded down are gone, and dry leaves have settled in every nook and cranny. Spider webs array it like a funeral shroud. The redwoods arch above the truck, creating a fitting and quiet final resting place. We find ourselves quiet, at times holding our breath so as not to disturb the scene. It is in this spot, under these trees, that I begin to understand the source of Steinbeck’s reverence and awe.

Bonnie is a traveller, perpetual student, writer, and chocaholic, who writes over at Wild Buttercup travel blog. She can also be found on twitter.