Home / WanderTales / Middle East / A City Through the Eyes of Love

Outside the Blue Mosque a sudden breeze picks up, and sparrows flutter across the grass like early autumn leaves. Opposite the bench where we have stopped, men sit under the shaded colonnade performing their ablutions before entering the mosque, and a carpet salesman from the nearby market tries to tempt us across to his shop.

“Not for buying of carpet,” he assures us. “Just for cup of tea. We are brothers, whether from East or West.”

Here in Istanbul, where the bridge between Asia and Europe is both symbolic and real, his words carry extra resonance. The frescoed arcades of the Grand Bazaar rub shoulders with towering skyscrapers and soaring minarets, glittering Ottoman palaces and the sparkle of Harvey Nichols. 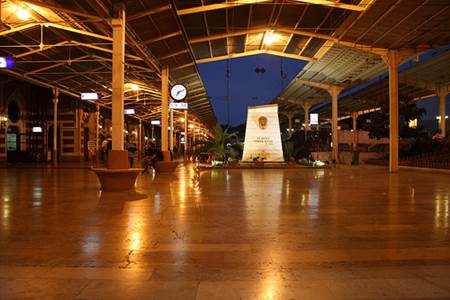 When my partner’s grandma heard that we were coming here, she told us to visit Sirkeci Station, once the end of the line for the Orient Express. As a wide-eyed teenager in the 1930s, Anne had accompanied her Aunt Florence on the train across Europe as a lady’s maid. Now in her nineties, she can still clearly recall the sights and sounds of the city, and the cream cloche hat that her mother bought her for the journey. But a certain glint in Anne’s eye, and her obvious passion for Istanbul above any other city on their Grand Tour, made me think that she treasured something else here more important than architecture or culture.

Today the station platforms are deserted save for a scrawny cat and her ginger kitten, and the stained-glass windows scatter jewels of sunlight onto the marble floor. But it is still easy to imagine the panama hats, parasols and portmanteau, and Earl Grey served amidst potted palms in the restaurant. Dutifully, we take photographs of each other under the station clock to show grandma.

On the street, the traffic is chaotic and the air heavy with fumes and heat. We follow the road along the waterside to the Galata Bridge. At Eminonu port, tiny boats bob on the choppy waves alongside the tour boats and ferries, and seagulls swoop and dive, the underside of their wings caught in the sunlight. Amongst the noise and rush, fishermen line the bridge with their rods, men sip gritty Turkish coffee in the cafes underneath, and shoeshine boys ply their trade. Something tells me that this scene was much the same when Anne arrived in 1936, and for a moment I can picture her holding onto her cloche hat in the strong breeze at the water’s edge. 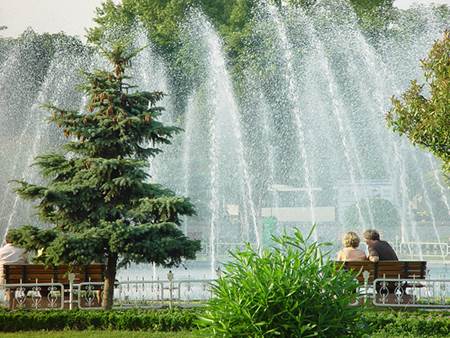 We head back up into town behind the Egyptian Bazaar. It is the eve of Eid, and shops are closing early in anticipation of the holiday. In the narrow streets, the sweet shops are busy with men buying be-ribboned boxes of Turkish delight and baklava.

Back in Sultanahmet, we stop at a tiny cafe near the Hagia Sophia for sweet apple tea served in tulip glasses. On the pavement outside, old chairs have been pushed together and covered in faded kelims to form couches, shaded by faded parasols and twisted vines.

As I sip my tea, I think of Anne. The rest of her story involved a corner cafe like this, in the same area of the city, It was there that she had her first brush with passion. Every afternoon when Aunt Florence and the other ladies took to their rooms in the heat, Anne was left to her own devices, and sneaked out of the hotel to explore the streets.

Mehmet was a medical student who started chatting to her one day outside a museum. “He asked me the time,’ she said, laughing. “It wasn’t much of a chat-up line!” But her eyes danced with delight when she described him to me, and her thin, cool fingers gripped mine.

“He had eyes full of life and mischief — and something forbidden! But it wasn’t like nowadays, you couldn’t just go out with a stranger, unchaperoned. I was taking a big chance on my reputation.” 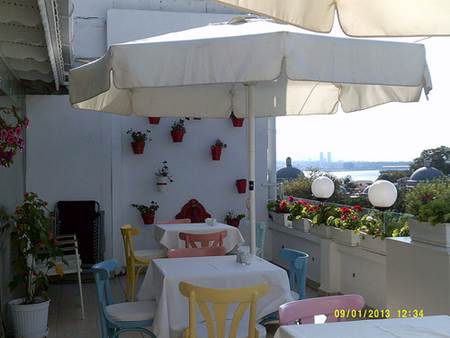 Anne and Mehmet snatched an hour or two together every afternoon in a dimly lit cafe near the museum. They held hands under the table, and stole secret kisses behind the wooden partition. And they told each other that they were in love. But after six days, Mehmet had to leave the city to work in a hospital in a nearby town.

“He said he would write to me, but I never heard from him again,” she told me. But although she said this with sadness, her eyes still shone with remembered passion. Anne knew that it was better to have loved and lost than never to have loved at all.

It is our last evening in Istanbul, and we eat dinner on the roof terrace of our hotel. In the street below, families queue outside kebab shops, waiting for them to open, the women in colorful headscarves, their daughters in twinkling headbands.

The city spreads out around us; a magic carpet woven from thousands of years of history. As darkness falls, the Bosphorus Bridge twinkles with blue and red lights as it links and separates East and West, and as the last call to prayer begins, it slowly takes over the night sky. High up on the roof we hear the chant of every muezzin across the city, entwining and colliding in an eerie fusion of harmony and discord. 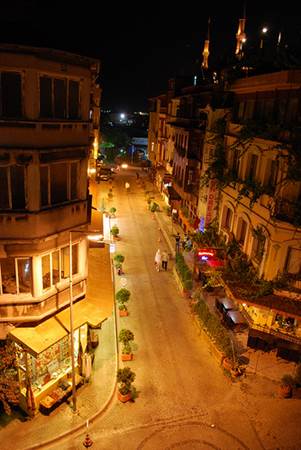 The same calls to prayer will have filled the dusky streets as Anne said goodbye to Mehmet for the last time all those years ago. I can clearly see her pausing at the hotel door to watch him disappear down the street, before walking into the restaurant for dinner with Aunt Florence. I can picture her aunt chattering about things of no consequence whilst Anne’s heart ached for the man she would never forget.

She may have lived a full and exciting life since her trip to Istanbul, but she can still vividly recall the passion awoken by the young man in Sultanahmet. I feel as though I have seen the city differently through Anne’s eyes, and I reach for my camera to record the chants of the muezzin for her: the sound paints a picture far more evocative and timeless than a photo of the station clock.

Mandy Huggins lives in Yorkshire, England. She writes travel articles and short stories, and her work has appeared in various national newspapers and magazines. She has also achieved success in numerous writing competitions, and won the British Guild of Travel Writers’ 2014 New Travel Writer Award. You can read some of her other work on her blog, Troutie Mcfish Tales.Â