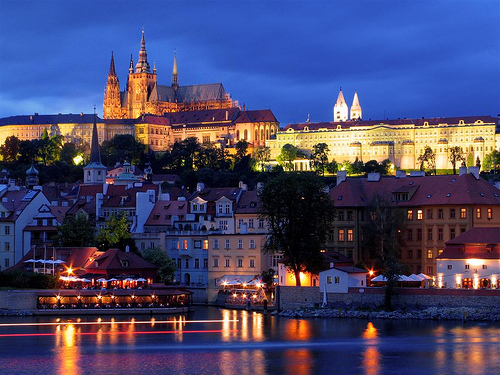 Ron and I had just arrived in Prague and needed a room for the night. We parked our car and walked for more than an hour, looking for a vacancy.

Rain pelted the sidewalk and it was getting dark, but my husband and I kept moving. We found ourselves on a street lined with X-rated shows and “available ladies.”

“Does that come with a bed?” I wanted to reply.

Hidden among the flashy clubs was the nondescript Hotel Central. As we staggered in, a buxom young woman shimmied by, straightening her dress.

A young man in an elegant gray suit sprang from behind the desk.Â  “Hello, I’m Erik.Â  May I place myself at your service?”

“No, you should stay in a more… um… quiet place.” After many phone calls, Erik found a family-run pension near Hradcany Castle. “The owner’s daughter is an English translator and will be glad to help you,” he said. “But the hotel is difficult to find.” That’s when we mentioned we’d forgotten where we parked our car.

Soon we heard the roar of an un-muffled engine, accented by clanging and screeching brakes. Outside was an ancient vehicle that looked ready to fall apart.

Erik ran out to the cab and leaned on the window, exposing his suit to the rain. He must have explained the situation, but he failed to get much of a response.

The driver was draped over the steering wheel, dirty and unshaven, with greasy hair held back in a ponytail. His clothes were ragged and ill fitting, and the inside of his car was equally unkempt.

With a flourish, Erik held the door open and waved us in.

“NO ENGLISH!” snarled the man. 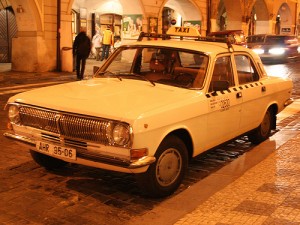 We roared away, careening through streets and parking lots, then dashed down an alley not much wider than the taxi. The narrow street dead-ended, and the cabbie slammed on his brakes, ground into reverse and zoomed backwards.

He sped towards the Charles Bridge. Knowing we hadn’t parked across the river, I yelled “HALT!” The driver turned the cab around and, like a homing pigeon, whisked us back to the Hotel Central.

Erik appeared at the window. “What happened?” he must have asked. The other man shouted and gesticulated wildly. Erik returned the barrage of Czech and pounded on the hood of the taxi.

Ron broke in meekly: “That’s OK, we’ll find our car on foot, then drive to the pension.”

Our friend turned back to the driver, who finally succumbed with a series of resigned grunts.

We barreled away, retracing the same route. When we got to the bridge again, Ron yelled “WAIT!!!” Suddenly I remembered parking near Old Town Square. I found the place on my map and showed it to the cabbie.

“URNGH!” he said, wheeling the car around.

Many streets radiated from the square. “How will we ever find it?” I asked Ron, peering out the dirt-streaked windows. I couldn’t believe my eyes when we passed our Fiat.

“Stop!” I cried.Â  Ron jumped out of the taxi. His body slumped when he saw a metal “boot” immobilizing our car and a ticket on the windshield. The summons was in Czech. We had no idea what to do.

“Urngh — polizie,” murmured the cab driver, reaching for his cell phone. He made a call and stepped out of the taxi.

Leaning on the hood, he sighed and lit up a cigarette, despite the steadily falling rain. 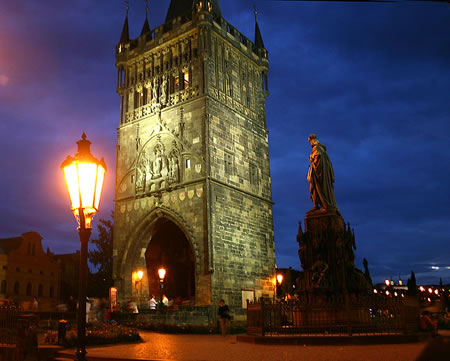 I wondered if we had enough cash for a fine. Facing the driver, I pointed to my wallet and shrugged my shoulders.
The man was indignant. “Urngh!” he exclaimed, writing 300 with his finger on the muddy windshield. “I think he means we’ll owe him the same amount no matter how long he waits,”Â  Ron said, stunned.

Eventually a policeman appeared, with dark, menacing eyes glowering under his captain’s hat. He lectured us sternly in Czech, then translated a sign hidden by tree branches: “Private parking.” Ron expressed great remorse and gave him the 600 korunas ($26) he demanded. As we waited for him to unlock the boot, I wondered what we would have done without our taxi driver.

We got into the Fiat and followed the cab, racing down streets, skidding around circles and crossing three bridges.Â  Occasionally we lost sight of the driver but found him waiting for us at the side of the road.

When we reached the Castle neighborhood, the taxi screeched to a halt. A clock chimed midnight as we crawled out of our cars in the darkness. I saw a light in the pension’s lace-covered window.

The three of us stood and looked at each other. I pushed 600 korunas into the cabbie’s grubby hand. He shook his head at the extra money, but we refused to take it back. I touched his shoulder and said, “Thank you.” The man looked down, then raised his eyes to meet mine. He smiled shyly and spoke, “Is super pension.”

The cab sputtered away. I approached the inn’s oversized door and lifted its brass knocker. Before I could let it fall, a dark-haired beauty appeared in the doorway and smiled. “Welcome to our home.”