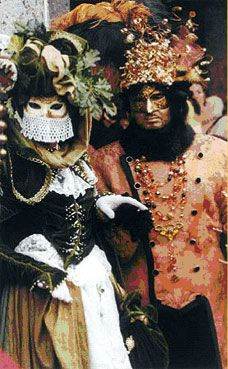 Tuesday was the last day of Carnevale–and my last chance to wear one of the getups that were now all bunched up on the bottom of my suitcase. I looked at them with dismay. I couldn’t imagine venturing out in anything so light-weight and there was certainly no way I could layer enough clothing underneath one of my costumes to keep warm. I finally admitted that I would freeze to death in my thin little ensembles. So, attired in almost everything else I brought, I headed for the Piazza San Marco.

My Venetian friends had invited me to come to Venice for Carnevale. They said I could use the studio apartment kept for family and friends. This was an offer I couldn’t refuse so I arranged my schedule to be in Venice the last week of Carnevale. Then, as an added treat, stop off in Paris for the weekend before heading home.

I queried everyone I knew who had actually been to Venice at Carnevale time. One of the unanimous facts learned was that Venice is cold in February. I was advised to wear my warmest clothing and take along some chemical pocket warmers. I thought I knew what cold was but, it turns out I had a lot to learn.

Planning what to take was fun. I have a trunk filled with wonderful costumes and, after trying them all on, decided to take my Pierrot and Midnight Sky ensembles. Both are made of silk and tulle and therefore easy to pack. It never occurred to me they wouldn’t be warm enough. I thought adding my long underwear with a few pocket warmers tucked here and there would be sufficient. After all, I reasoned, I am almost never cold.

It was early evening when I arrived at Marco Polo Airport. My friend was waiting at customs and whisked me out to his car and sped off toward Venezia. After leaving the car at the autopark, we hopped aboard a vaporetto headed down the Canale Grande. I was so excited at once again being in Venice I didn’t feel anything but a delicious tingling sensation. Ah, I thought, La Serenissima, I’ve come home.

My other friends were waiting in the main house, so I popped into the studio just long enough to unload my bags and freshen up. It wasn’t until much later, after we wandered the streets and alleyways, drank red wine and ate panini at a friend’s wine bar, danced in one of the small campi with other Carnevale revelers, and drank several shots of grappa, that I found myself back in the studio and freezing. I had forgotten to leave the heater on and the place was frigid. The studio is located on the ground floor of the palazzo and has stone walls and tiled floors. There is a canal just outside and the waters’ damp cold seemed to penetrate everything. When I stayed there last September, the weather was hot and humid and the studio an oasis of cool relief. The freezing cold came as an unwelcome surprise. 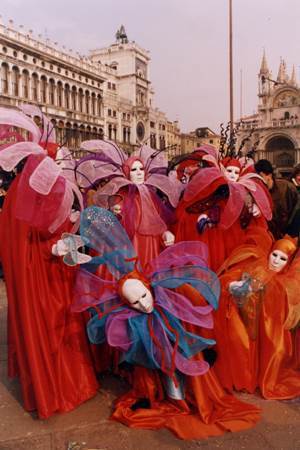 I looked at my silk pajamas with dismay. How would those thin things keep me warm? So, I layered a T-shirt, the PJs, my travel robe and a pair of socks, then crawled into bed and pulled the heavy blanket up to my chin. I lay there shivering for a while then, warm at last, fell asleep watching the exquisite reflections of water playing on the old wooden beams of the ceiling.

I awoke to the comforting sounds of bells chiming from the church across the canal. I hopped out of bed just long enough to turn up the heater but long enough to realize it was still nippy and the tiled floor was icy cold. Ultimately the thought of a hot, strong coffee bribed me out of my cozy nest.

I was dressed and ready when my friend came down to see if I was awake. She said it was very cold out and I should be sure to dress warmly. Of course I had already figured that out, but obediently pulled on an additional sweater.

When we stepped outside, an icy gust of wind whipped around the corner and through all my layers of clothing and down into my bones. We decided if we walked rapidly we wouldn’t feel the cold as much. Once at the Piazza San Marco, we forgot about being chilly and lost ourselves in the crowds. We scurried around like paparazzi snapping photos of the gorgeous costumed characters posing among the merrymakers.

We bought some fritole and galani, the delicious treats available only during Carnevale. Fritole are little round balls with small pieces of dried fruit and pine nuts inside, fried then abundantly sprinkled with granulated sugar. Galani are fried strips of sweet dough, lavishly dusted with powdered sugar.

The thought of wearing one of my cute costumes later in the day, after lunch, was quickly squelched when I poked my nose out the window and saw it had begun to mist. The air felt even colder than it had that morning.

It rained off and on all the next day, so once again I decided not to wear a costume as we ventured out to the Piazza San Marco. The elaborate costumed characters were even more fantastic than the day before. They roamed from one end of the piazza to the other, pausing to pose for photos as they made their promenade. I took countless photos, running from one incredible masquerader to the next like a shark at a feeding frenzy. 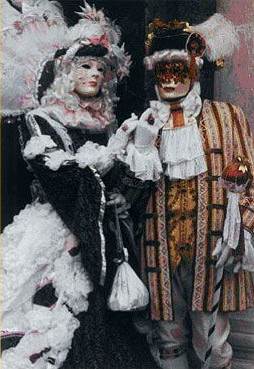 Late that night I was awakened by the sound of sirens warning of an impending aqua alta or high tide. The men of the palazzo and the neighboring houses could be heard leaving their homes and heading off somewhere, their deep, melodic voices echoing along the calle. My curiosity was great but when I jumped from my bed to look out the window, I was immediately frozen and so hopped back into my nice warm refuge. Even my normal nosiness couldn’t bribe me to get up, get dressed and go out to investigate what the men were doing and where they were going. However, I did check several times during the night to make sure the high water wasn’t coming into the studio. The next day I learned the men had gone to start the pumps in the basement of the church across the canal so it wouldn’t flood.

The fourth day, Sunday, we didn’t go near the Piazza San Marco. We heard on the news that police had closed all entrances to Venice because of overcrowding. We avoided the traditional tourist places and instead went to visit friends and enjoyed a wonderful lunch and relaxed afternoon listening to music far from the maddening crowds.

Monday found us once again in the midst of the other photographers snapping away to our hearts’ content. Naturally I didn’t have on my costume. Looking at the big, elaborate costumes worn by everyone else, I felt certain they were either fur or down lined. And undoubtedly, pocket warmers were tucked in under all those robes, hoops and capes.

Finally it was the last day of Carnevale and there I was, back at the Piazza San Marco. I felt like I knew some of the characters from having photographed them during the last few days. There was an amazing assortment of finery, laces, velvets, metallics, feathers, glitter, spangles and furs. The masks and headdresses were fantastic. The sun made a short but very weak appearance late in the day, then slid behind the Chiesa Della SalutÃ© and was gone. The cold settled around us like a shroud and still the costumed characters paraded, preened, paused and posed for photographers. Music from the cafes mixed with the laughter of the children as they ran happily through the crowds tossing bright colored confetti. The temperature dropped as the evening mist and fog began to form, turning the piazza into a magical, mystical fantasy.

And then it was over.

On Ash Wednesday I wandered the streets cold and alone. It was gray and foggy as I made my way through the Piazza San Marco. Gone were the revelers and fantastic costumes. Gone were the hordes of people. Gone were the fritole and galani. The band stands were empty. The piazza nearly deserted. The only sounds were those of the sweepers cleaning up and the soft cooing of pigeons scavenging through the debris looking for abandoned tidbits of anything edible.

The Florian CaffÃ¨ was nearby so I paused for a warming cup of tea. Looking around I was surprised that not even a spangle or a small feather remained from the extravagant masqueraders who posed there only yesterday. 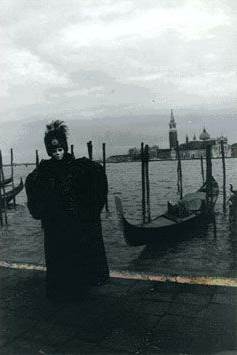 I stopped at a small mask studio to buy some souvenirs. The shop keeper was a friendly young guy who told me all about how the masks are made. We stepped outside to see something in the window and he complained about the cold. He said it felt colder this year than he remembered and I laughed and told him I had never been colder in my life! Then, as I reached into my pocket for money, I felt something warm. On impulse I pulled out my pocket warmer and placed it into his hand. His eyes lit up with amazement and pleasure. He was so fascinated by it that I wound up giving him both my treasured little warmers. He, in return, gave me a lovely miniature mask.

Leaving Venice is always sad and I tried not to cry as the vaporetto chugged toward the autopark because I knew the tears would freeze onto my cheeks. Later, as the plane flew over La Serenissima I blew a kiss then settled back, cozy and warm, for the short flight to Paris.

A weekend in Paris! What a treat! Ah…to wander the little streets and hang out at terrace cafes. Yes, I thought, this would be a perfect ending to my holiday. It never occurred to me that it was going to be winter there too and that Paris is farther north than Venice.

It was snowing when I arrived in Paris.

All photos courtesy of author