Home / WanderTales / Latin America / How not to do the Monkey Trail 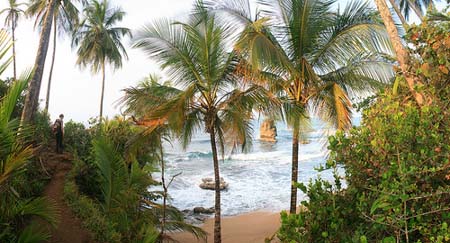 The general consensus was that we should not be doing what we were doing. It was starting to rain and our electric blue Yaris was stopped outside the walls of Hotel Riu in the northwestern province of Guanacaste. We asked directions from the huddled mass of hotel employees seeking shelter at the bus stop, already expecting raised eyebrows upon our request. This was the third time we had to ask for directions and, at this point, the incredulous response came as no surprise.

The Monkey Trail wasn’t a popular road during the rainy season, and the idea of driving it in a low-to-the-ground sedan was absurd even under the best conditions. We were being reckless, perhaps. 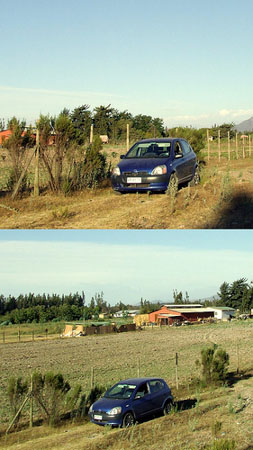 My editor, Ashley, was driving and did not seem entirely confident in her off-road driving abilities. For me, the idea of barreling down a muddy road in a car that I was completely powerless to stop made me nauseous.

“You shouldn’t go that way,” said one of the women eyeing our front bumper that hovered less than a foot above the ground. “There’s a highway, you know.”

We did know, and for some crazy reason we didn’t care. Driving one of Costa Rica’s most treacherous roads had not originally been a part of the plan — there were plenty of easier routes between Playas del Coco and Tamarindo – but the preposterous task had taken root in my mind as some kind of divine mandate, a challenge that was impossible to refuse. The more people who told us not to take the road, the more unlikely it became that we would follow their advice.

Eventually we managed to squeeze directions out of an amused Tico, who probably imagined us sinking into a ditch within the next hour. We turned around and rolled the car over the resort’s speed bumps, barely clearing our back bumper, cringing with worry for what lay ahead. 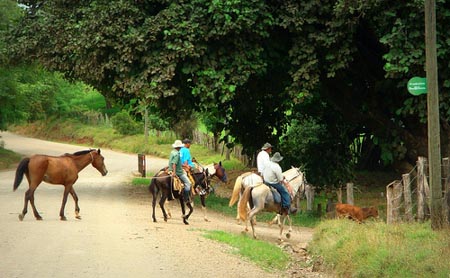 In typical Costa Rican fashion, the entrance to The Monkey Trail was not well marked. In fact, it probably would not have been marked at all if it were not for a zip-line company located right at the beginning. We knew the trail was remote and less traveled, but the rustic nature of the scene exceeded our expectations. The road was covered with potholes the size of basketballs. It was raining harder now, and the packed dirt was quickly turning to mud. A shirtless boy in pajama pants walked by, trailing a horse behind him, crystallizing the rural image.

After one more stop for directions, we were off down the trail. Ashley’s method for driving the more precarious stretches of road reminded me of how a mother rips a bandage off a child. She gunned the accelerator, teeth gritted, driving as quickly as possible as though trying to spare the car any prolonged pain. Her plan seemed to work, and the Yaris was doing surprisingly well. Its low bumper seemed to clear every bump in the road without scraping as we bombed down the steep hills, a steady stream of doubts and cusses streaming from Ashley’s mouth. “We are going to die,” she said. “We are going to kill this car.” 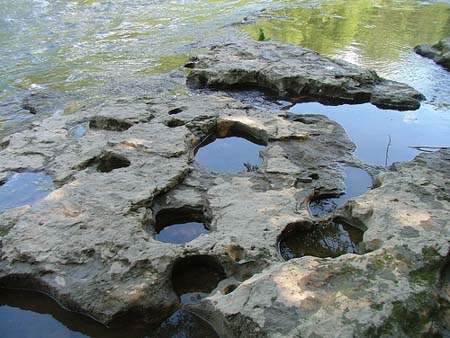 All I could do was laugh maniacally, bouncing up and down like a life-sized bobble head, far too aware of the mountain walls passing inches from my window. We whipped around curves, dove over potholes and slogged through the mud. I was completely out of control, sitting with my feet pressed hard against the floor, pumping an imaginary brake. The more we drove the more apparent it became that we were alone on a road in the middle of nowhere.

At one point, passing a construction site, we stopped to write down the phone number displayed on its sign. We were that certain we would need to be pulled out of a ditch, rescued from a river or dragged out of a muddy rut. Slowly, the potholes became less crater-like and the puddles less like rivers; the road began to look more like a road and less like a mountain face. Before we knew it, we were driving through an actual town, the rain slowed to a drizzle and we watched Flamingo Beach approach through the windshield. 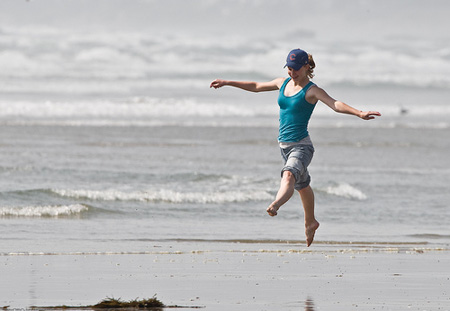 Ashley parked the car. Adrenaline was still pumping through me; my feet were still pressed to the car floor. The beach was completely empty and silent, save for the slow roll of the waves and the light rain sprinkling the volcanic black sand, the first hints of a sunset casting a pink glow over the water.

Ashley kicked off her shoes and sprinted toward the water, arms raised in victory. I followed, slowly, snapping a photo as the warm sea pooled around her feet, rewarding her for the completion of her quest. I inhaled deeply and laughed to myself, pulling off my own shoes welcoming the ocean’s gift.