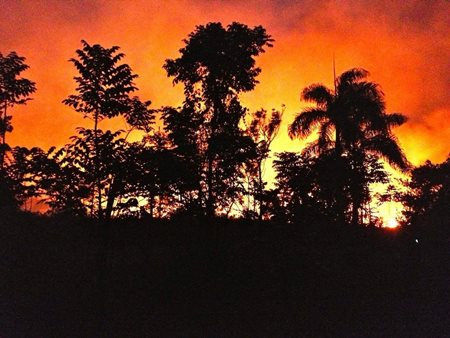 When the fire gets within 200 meters of our little rental house in the Dominican Republic, I begin thinking about what to pack. Cats, computer, Clipper Race gear, running shoes, camera…oh yeah, passports and documents… is that too much? Can I throw in my iPad?

“What? No clothes, but you want your running shoes?” Ryan asks, as I run around the house, flustered by the smell of smoke and the sound of wood crackling in our backyard–a sound I really only want to hear at a beach bonfire party. Far away from my house.

We were only gone for an hour or two, at our gym on Kite Beach in Cabarete, but by the time we returned to our neighborhood, the sky behind our house was a crimson haze of blazing heat and smoke. And Dominicans were standing in the street, staring toward our housing complex, Bali Hai, saying, “The lagoon’s on fire. This is bad.”

As we got closer to Bali Hai, the crackling and snapping of burning branches grew closer, so we followed the noise until we found ourselves parked in front of a neighboring hostel. There was a confused looking backpacker standing in the driveway with all her belongings, so we stopped to ask if she was okay. She said the hostel was evacuating, but she didn’t know where to go. We pointed her toward the Surf Camp up the road and asked if she knew how the fire started. 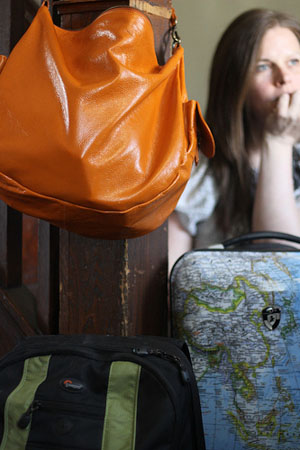 “Some fishermen tried to clear a path through the brush to the Lagoon, but I guess it got out of control,” she said.

Out of control was right. The fire was so close to the hostel that the trees were bathed in red and orange, which would have been beautiful if it were a sunset in Sri Lanka. But the heat we felt coming off the lagoon behind the hostel had me seriously worried. Do we pack up and get out of here now, or do we get a second opinion?

It was like that classroom exercise I used to do with my ESL students to get them chatting in English. “If your house were on fire and you could only take five things, what five things would you take?”

“Your running shoes?” Ryan asks again, as we go over my packing list.

“If the fire’s moving fast, I want to be able to run,” I say. “I mean I only get five things and, well, what about my passport? That’s taking up one of my five things. I don’t have room for clothes.”

“Why is it only five things?” Ryan asks.

“It’s a classroom exercise. You know the one.”

“This is a real fire,” Ryan says. “We aren’t really restricted to five things. Wait, why are the cats on your list but not me?”

“Should we go see if GermÃ¡n needs help?” I say, changing the subject. 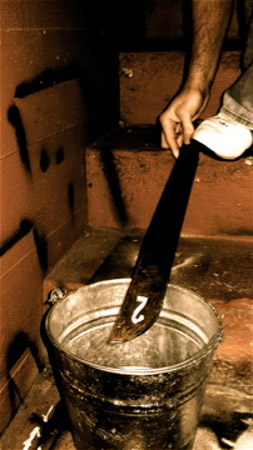 GermÃ¡n is our landlord at Bali Hai and, being that he owns the complex of eight houses near the lagoon that is now on fire, he is visibly stressed. Moments before, he rushed past us in the road, damp with sweat, carrying a machete in one hand and a small bucket in the other. I suggest to Ryan that we keep a close eye on him, as I’m not sure how one fights a two-story fire with a bucket and a machete.

But the biggest concern seems to be our neighbor’s house across the way, which is located right on the lagoon with a few thatched-roof huts practically touching the water. So we head in their direction. And since the fire is now blazing its way up the lagoon, charging straight for our neighbor’s backyard, everyone from Bali Hai is in the yard keeping a lookout for signs of trouble and any indication that we should clear out.

“Where’s the fire department?” I ask, as the flames start licking the reeds under the wooden balcony I’m standing on. Laughter erupts from all directions, which doesn’t answer my question, but at least tells me not to wait around for a rescue. My watch says it’s 10 p.m. and the fire’s been blazing for five hours now. And still no signs of a fire truck.

Around 10:30 p.m., Ryan and I go back to Bali Hai to see if our neighbors are clearing out yet, which is when we see GermÃ¡n and his brother run past us toward a wooded field behind Bali Hai, again carrying a machete and a bucket. We run after them to see if we can be of any assistance. But as I watch GermÃ¡n attack hanging tree branches over the lagoon with his machete while throwing what might as well be thimbles full of water at the towering inferno, I’m at a loss as to how to be useful in this situation.

In the end, what saved Bali Hai and our neighborhood was not the fire department, or a machete and a bucket, but a small, manmade canal that had been dug along the length of the lagoon two years ago, separating the thick vegetation that was ablaze on the water and the trees near the houses that ran along the perimeter. When the fire got close to land, it died out slowly, unable to cross the canal to the houses on the other side. And as we watched the fire abate, we heard two fire trucks pull up behind us, having arrived on the scene about six hours too late. 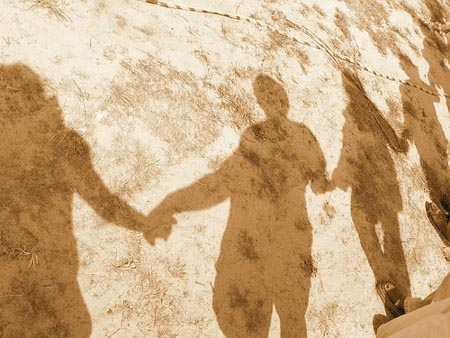 After two months of living in Cabarete, we had not met any of our neighbors outside of the Bali Hai complex. But on this evening, everyone was gathered together – Italians, Spaniards, Americans, Brits, Germans and more – chatting in English about life in the Dominican Republic and expressing concern for our neighbors and their properties.

It was one of those moments when I realized you could live in a community for years and never really be a part of it. But bring on a crisis, and somehow our lives become woven together. And a community emerges.

Tasha Hacker is a freelance writer and travel blogger. Tasha’s blog, Turf to Surf, is where she records stories about her travels around the world, both on and off sailboats.

Tasha and her husband are competing in two legs of the Clipper Round the World Race, starting September 1, 2013. Their circumnavigation includes racing yachts from London, UK to Rio de Janeiro, Brazil, and from Cape Town, South Africa to Perth, Australia. Follow Tasha’s travels at Turf to Surf, on Facebook, Twitter, Turf to Surf Instagram and Turf to Surf Google+.