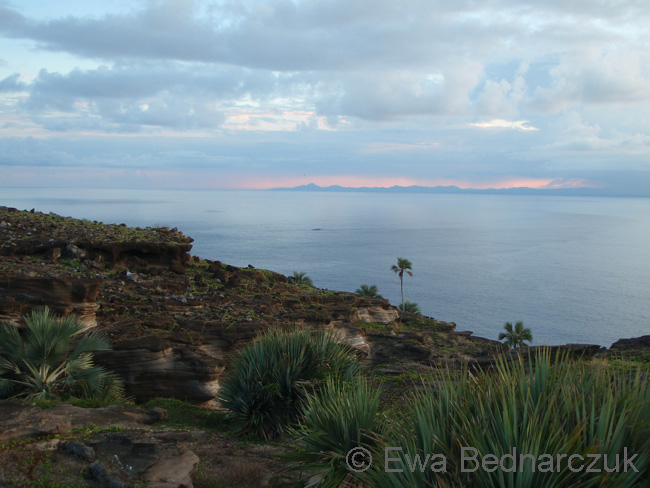 I felt a prickly tickle scurry across my face.

Instantaneously, I ripped myself from sleep and fumbled for my tiny flashlight all the way at the head of my bunk. The mysterious assailant must have fallen off my face and onto the folded up fleecy sweater I use as a pillow. I hoped he wasn’t still on my head. But even if I did find a light in time to illuminate its creepy form I probably would not be able to see him since I took out my eyes for the night. Where the heck did I put my glasses again? Argh. Never mind, I wanted to try and see anyway. My fingers homed in on the flashlight and I clicked it alive pointing to my improvised pillow. There it was! My snug earplugs enclosed the sound of adrenalin-rich blood pounding to my brain. I saw a large glistening cockroach running for cover between the wall and my sagging foam mattress. Pfew! I had a lucky break tonight, just a roach. I was worried it was…I was petrified that it might have been…a…a… Gulp!

I am an ecologist on the adventure of my life. Several months ago I won a vocational training scholarship to learn about endangered species conservation while island hopping from Canada all the way to the Indian Ocean. I promptly quit my soul-sucking and brain-numbing consulting job, stashed away my things in my parents’ shed, put my plants in foster care and headed off. I’ve found my way to Round Island off the coast of Mauritius.

On Round Island I live in a remote field station with other resident scientists who chase around all sorts of weird and wonderful creatures found nowhere else in the world. Ecologically speaking Round is a unique island refuge to many cool species. However, there is one critter we fear and steer clear of: the scorpion.

Each of my bunk-bed mates had been visited by one, sometimes two, of the fearsome eight-legged arachnids in the thick of night; during their most vulnerable, well nearly most vulnerable. The encounters always ended with violence. It wasn’t just paranoia that told me it was only a matter of time before I was assaulted as well. It was the law of chance and probability, a statistical ticking time bomb.

Each night I awoke from shallow sleep and scanned the sheet shielding my body for intruders. I ran my fingers 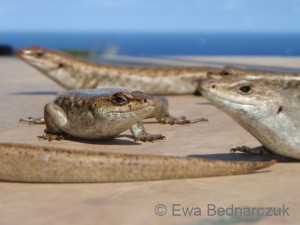 through my hair too. Four legged visitors (skinks and geckos) were cool, six legged ones (cockroaches, beetles and moths) were tolerable, but the eight-legged ones freaked me out. Every night since the first attack on a friend in the bunk above me, I slept in the very middle of the already uncomfortable bed, mummified in my sheet, careful not to make contact with the bed edges, posts or walls, all potential travel routes for the creeps. After a few days of this routine my chronic neck muscle spasms returned. Great. Now I couldn’t even turn my head or make sudden ninja moves if required to defend myself. But at least I could still patrol the perimeter of my bed just in case a ruthless beast was on the prowl.

Then a small disaster struck.

I contracted what we affectionately call “Apricot Anthrax”: an unknown temporarily debilitating strange virus of a dubious origin possibly intercepted on a dried apricot imported from Tajikistan. A relentless pain of twisting and crushing of my joints and muscles confined me to my dangerous bed. Every minor strain and injury incurred trekking up and down the volcanic island peak was magnified with throbbing pain. My head was filled with static. I didn’t want to move, just sleep. Then came the unpleasant nausea, and on day three and four diarrhea finally had the last laugh. 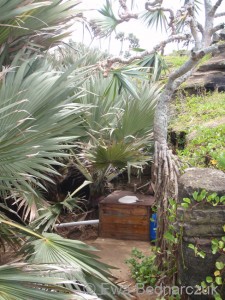 I was exhausted by the numerous hunched-over jogs to our compostable toilet. Each time I made it to my final destination I had to go through an increasingly annoying procedure: lifting the toilet seat cover and wiping wriggling maggots off the seat, then lifting the seat itself and scanning for lurking – you guessed it – scorpions. It was during my third trip to the toiled gulley that I surrendered out loud and invited the dreaded scorpion-beast to just sting me already! I only wanted a moment of peace!!!! A chance to sit back and simply relax on the toilet for a few minutes!!! To my relief Scorpio did not call my bluff. I escaped un-stung once more.

I don’t know if during those four days of sickness scorpions had a dance party on my bed, or my forehead for that matter, because I just didn’t have the energy to worry any more. I felt my most miserable lonely self and I wanted to be beamed home. I sulked in my misery and waited for the big mean S to strike. To my great annoyance he did not.

Once I recovered from Apricot Anthrax, I was overjoyed by the fast approaching crew change-over and my imminent return to scorpion-free mainland. It only made sense that finally we would meet. I found Him while packing dirty sweat-starched field clothes into my barrel. He was dozing behind a jar on my bunk-bed shelf, just a tiny hop and skip away from where I lay my head to sleep. The size of his massive tail and stinger petrified me. 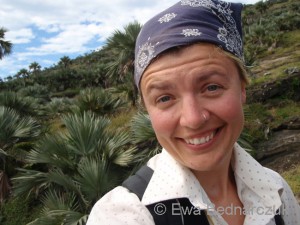 But my will to escape pain overpowered my inertia and I crushed poor Scorpio in his sleep. Then I fed him to a grateful skink.

Months have passed and Scorpio has not yet stung me. And now he is running out of time; this is my last month on Round Island before I hop to my next island adventure in Madagascar. Maybe just maybe I will cheat fate and get off this island sting free.

All photos by Ewa Bednarczuk