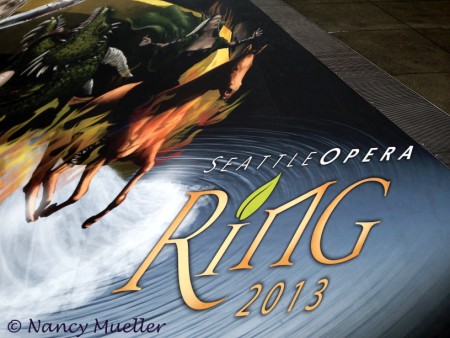 Seattle Opera Ring 2013. I did it! I just made it through my first complete performance of Richard Wagner’s Der Ring des Nibelungen – a four-opera heroic epic.

Summarizing the plot of Der Ring des Nibelungen is an adventure in itself. 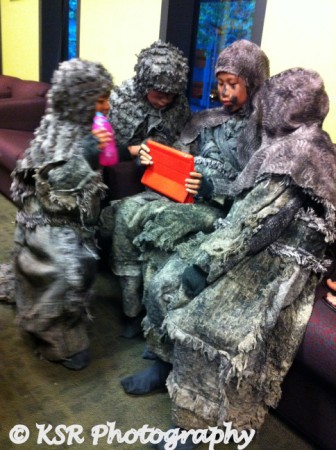 In a nutshell, the evil dwarf Alberich steals the magical gold protected by the Rhine Daughters. The gold is magical because whosoever forswears love and forges the gold into a ring, can rule the world.

Enter Wotan, King of the Gods, who also desires the ring that Alberich has forged from the gold. When Alberich refuses to give it to him, Wotan rips it off his finger. But Alberich curses whomever possesses the ring, setting the stage for a path of death and destruction throughout the operas. Wotan later gives up the ring to Fasolt and Fafner, two brother giants he had commissioned to build Valhalla, a home for the gods. When Fasolt claims the ring for himself, Fafner kills him.

Wotan has sired several daughters (the Valkyries), including his favorite Brünnhilde. He also sired a son, Siegmund, with a mortal woman. When Siegmund goes into battle, Wotan naturally wants to protect him. But Wotan’s goddess wife, Fricka, demands his death. Wotan reluctantly agrees and orders Brünnhilde to carry out his wishes. But Brünnhilde defies Wotan justifying her actions by saying that she knows that in his heart, Wotan doesn’t mean it.

It’s bad enough to defy your own father, but when he’s Wotan, King of the Gods, watch out. He casts Brünnhilde from the god-family. He puts her to sleep on a mountain top declaring that she will be awakened by the first man who sees her. Brünnhilde pleads for only a hero to claim her and requests a ring of fire around her to prevent cowards from entering. Wotan honors her request.

Wotan’s grandson, Siegfried, was conceived by brother and sister,  Siegmund and Sieglinde. After his parents die, Siegfried is raised by Mime, the Nibelung, who hopes that Siegfried will slay the dragon Fafner (formerly the giant who has since turned himself into a dragon by the magical helmet, Tarnhelm). Fafner the Dragon guards the gold ring which Mime desires for himself. Siegfried kills Fafner with his father’s repaired sword, Nothung, and captures the ring. Before leaving, he also kills Mime when he learns of his deceit from the Forest Bird.  When Siegfried hears about Brünnhilde from the Forest Bird, he sets off to find her. He climbs up the mountain, enters through the ring of fire and awakens her with a kiss. The two declare their undying love and passion for one another. 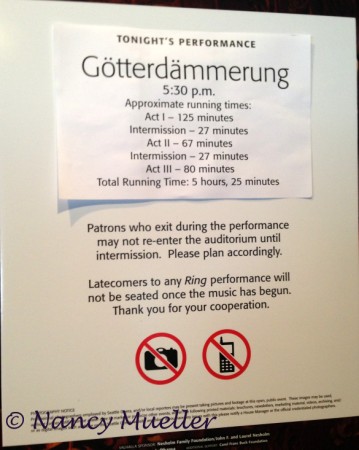 The end is in sight. Siegfried sets off for battle, leaving Brünnhilde on the mountain. Hagen, Alberich’s son, concocts a treacherous plan to deceive his half-brother, King Gunther, half-sister, Gutrune, Siegfried and Brünnhilde. By giving Siegfried a magic potion when he arrives at their castle, they erase his memory of Brünnhilde. That way Siegfried is free to fall in love with Gutrune, Gunther is free to marry Brünnhilde, and they would have the magical ring.

Of course, things don’t turn out as Hagen had hoped, once Brünnhilde learns what happened. Hagen kills Siegfried, then Gunther. Hagen reaches for the ring from Siegfried’s finger but is warned away when the dead hand of Siegfried rises in warning. Hagen backs away.

The opera ends with Brünnhilde taking the ring from departed Siegfried before walking into the flames on a funeral pyre she has requested. The ring returns to the Rhine Maidens who pull Hagen under as he attempts to grab it. Valhalla is destroyed, the curse removed, and the earth returned to its natural order.

So was it worth enduring about 18 hours of opera in a week? Oh, yeah! The  transcendent music, the heroic journey, the stellar performances from Greer Grimsley (Wotan), Stephanie Blythe (Fricka), Alwyn Mellor (Brünnhilde), Stefan Vinke (Siegfried), Richard Paul Fink (Alberich) and everyone in the cast and behind the scenes, all made for a truly unforgettable experience.

Have you ever seen the complete Der Ring des Nibelungen, wanderboomers? Please share your experience with us here.