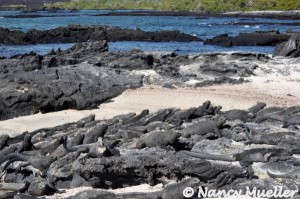 Can you spot the marine iguanas in this photo?

With the night of choppy seas behind us, our morning dawns bright on the youngest of the Galapagos Islands, Fernandina. For me, this is the most other-worldly island of all . . .

From our dry landing at Punta Espinosa (Espinosa Point), we set off on a leisurely three-hour walk to witness earth in its most primitive state. Along the way fellow passengers call out to each other:  “Watch your step. Look where you’re walking” which I take as a reference to the uneven volcanic rocks on our path. But a sudden movement underfoot rivets my attention. 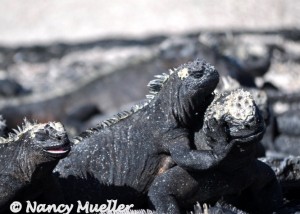 A marine iguana stirs. It takes a nanosecond for me to realize that I’m standing in the midst of a large colony of oversized lizards coating the entire surface of surrounding black lava rocks. So these are the creatures Darwin referred to as “disgusting . . . clumsy . . .  imps of darkness.”

Sure they spit from time to time as they expel sea salt from their glands, leaving them with little white crowns. But I’m entranced by these gentle lizards. Most stand frozen, some resting on top of others, playing their own primitive version of the children’s game, “Statues.” The sight is all the more remarkable because of their size and abundance. Gradually, as the iguanas are warmed by the sun, they begin to move, with some heading out toward sea, searching for food. 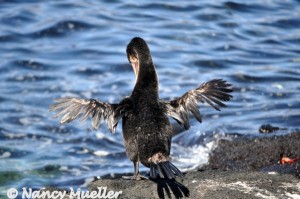 Not everyone who visits the Galapagos Islands makes it this far west to Fernandina. But it’s high on my list of favorite islands. Not just for the marine iguanas, the only seagoing lizards in the world, but also for the chance to see the endemic (native to Fernandina) flightless cormorant.

Our naturalist guides, Alex and Jorge, explain that the cormorant evolved without the need to fly since they have no predators to fear on the island and food is close by. 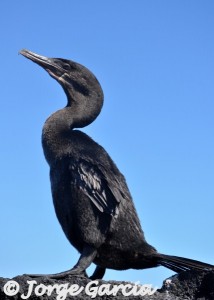 Fernandina is also worth a visit because not only is it the youngest of the Galapagos Islands, but also one of the most active volcanically. Alex shares his childhood memory of the sound wave from the 1968 explosion that pushed him to the ground on San Cristobal, over 200 kilometers (almost 125 miles) away. Alex tell us that the ash from the eruption was carried as far away as the Pacific Northwest and recorded in Colorado as equivalent to the force of 5 nuclear bombs. Yikes.

But all is calm on the day of our sunny visit here. We view the smooth pahoehoe, rope-like lava all around. On Alex’s recommendation, we take time out to sit in this “zen garden of lava” and contemplate the surroundings which he finds “very soothing for the spirit.” 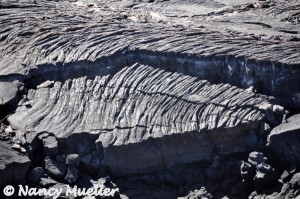 Following lunch on board our small ship, the MV Evolution, we’re off to seahorse-shaped Isabela Island, the largest in the Galapagos.  From our dry landing at Tagus Cove, we take a power hike to Darwin’s Lake with spectacular views of Darwin’s Volcano. We round out our day’s adventure with kayaking, panga snorkeling and a panga ride.

Next up: a 15 hour cruise to North Seymour Island before ending our trip on San Cristobal.