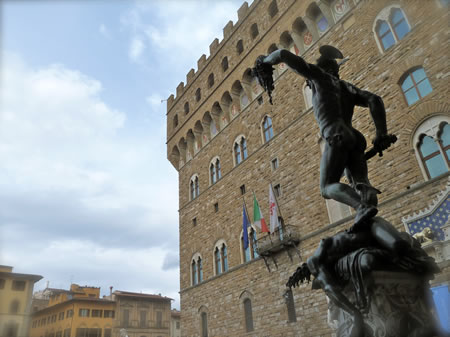 When I visited Florence, Italy’s Palazzo Vecchio last spring, its’ walls seemed to hold a whiff of mystery. I lingered in the grand hall meeting hall, Il Salone dei Cinquecento, soaking up the sort of spooky ambiance, picturing the De Medicis holding court with foreign potentates and generals returning from battle. It’s the kind of place that makes you wonder,

As it turns out, those hallowed walls would indeed have a lot to say! The Palazzo Vecchio has splashed across recent headlines at the center of a story that is part Indiana Jones, part CSI and part National Treasure — and wholly controversial in art and culture circles.

A team of researchers, led by art super-sleuth Maurizio Seracini from UC San Diego, believe they may have found a long-lost Da Vinci piece hidden behind one of the grand hall’s massive frescoes that were painted by Vasari in 1563. Seracini was first tipped off by a clue painted within one fresco – the phrase “cerca trova“, meaning “seek you and you shall find”. Hollywood could not have written this better. 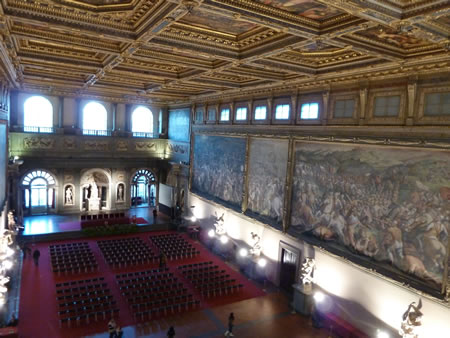 the fresco in question is the one closest in the frame, above

The research team has recently drilled into the fresco in question, making two promising finds – a hollow gap between the back of the Vasari fresco and a second wall, as well as a sample of black pigment extracted from that second wall which reportedly matches the pigment Da Vinci used for the Mona Lisa. It’s known that Da Vinci had begun creating a large fresco at the Palazzo Vecchio some 58 years earlier, but it was never finished and believed to have been all but lost to the modern world.

Since these exciting reports almost two weeks ago, the Da Vinci discovery has not been confirmed. Meanwhile, controversy is brewing as critics fear that the Vasari fresco (a masterwork itself) may be damaged beyond repair for this speculative Da Vinci hunt.

The prospect of unveiling a lost Da Vinci piece is tantalizing, but is one artist’s work worth sacrificing another’s?

More travel photos and stories for Photo Friday over at DeliciousBaby!