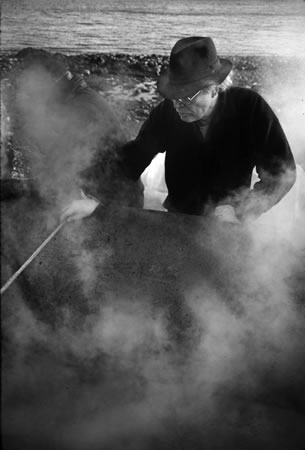 Stepping off the busy streets of downtown Vancouver, B.C. on a recent chilly afternoon, a hush fell over me as I entered the gallery, where I’m introduced to a man of many names. . .

The first is the Haida name he received at his grandfather’s funeral in Skidegate, in 1954. It means “dear one”. His second Haida name came in 1973; it means “the one with the beautiful voice” or ” one who speaks well”. He is also known as Carver, Painter, Jewelry-maker, Sculptor, Illustrator, Story-teller. Bill Reid could not be confined to one name.

In the first corridor of the Bill Reid Gallery, I encounter some of Reid’s earliest work, such as a miniscule pink tea set the he carved out of chalk at age 12 as a gift for his sister. I’m also introduced to “the final exam”, an on-going study of an antique Haida painted bentwood box, which inspired him early on and he revisited many times during his career. The corridor is lined with a wall of windows bearing translucent blue-green overlays with Reid’s designs, lending the room an ethereal glow, and the opposite walls feature large canvases colorfully painted with striking, iconic images such as the eagle.

Moving further through the gallery I am introduced to the Bill Reid and the Haida Canoe, the current feature exhibition which has been extended to run through March 22nd. This multimedia exhibit presents Reid’s passion for the canoe as the quintessential union of form and function which defines Northwest Coast art. The central point of this story is Lootaas (“Wave Eater”), an incredible 50-foot traditional Haida canoe created by Reid for Expo ’86. I learn that canoes are present in all facets of indigenous North Coast life; not just for transport, but for hunting, warfare, celebrations such as the potlatch, and even death. In the beautiful companion book Bill Reid and the Haida Canoe, edited by Martine Reid and available only at the gallery, I learn that Reid even saw that “the Haida canoe embodied the ovoid, the archetypal form from which all Haida design developed.”

The Haida Canoe exhibition tells the story of Lootaas’ journey from study to creation to its’ open water voyages through a dynamic collection of video, photos and sketches. It traces the fascinating process, starting with the felling of an 800 year old, 200 ft tall cedar tree in the forests of Haida Gwaii, on to the steaming process, in which the hollowed-out log is filled with a water/ammonia mixture and fire-heated rocks and then covered, the steam helping to push the bottom out to form a slight curve and spreading the beam a mind-boggling 20 inches further out. From there, Reid oversees a team of six carvers and together they bring Lootaas to life. In the gallery, Lootaas’ beautifully painted paddles stand on the ready to dip back into the water at any moment. 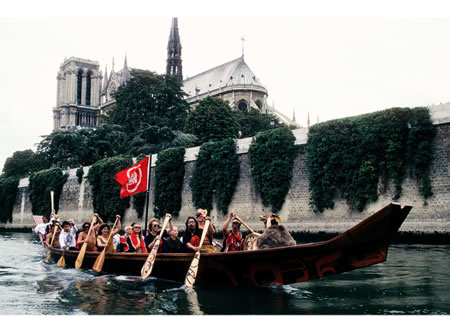 Reid is said to have gained more satisfaction from building Lootaas than from anything he’d ever done, and he summed up its importance saying, “Western art starts with the figure. West Coast Indian art starts with the canoe.” Lootaas was the first Haida ocean-going canoe of its size to be created in a century, and it inspired a revival of canoe making and paddling among many of the North Coast tribes, which is now celebrated at the annual Tribal Journeys intertribal gatherings.

In the permanent exhibits at the Bill Reid Gallery, we are also introduced to the many other facets of his studies and talents. Sculptures, such as the sprawling bronze frieze Mythic Messengers, as well as (scaled-down) replicas of the amazing Raven and the First Men (see the original at the UBC Museum of 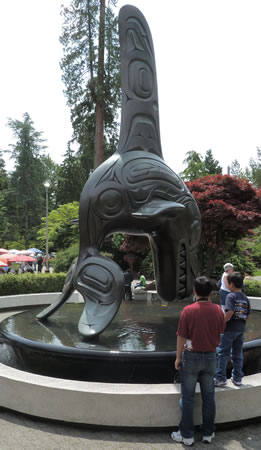 Anthropology) and Killer Whale – Chief of the Underworld (the original resides at the Vancouver Aquarium), are great examples of his breathtaking large-scale work. Yet intricately-detailed jewelry pieces and hand-drawn studies show the full range of capabilities and the limitless eye Bill Reid brought to all of his expressions. The gallery also displays some works from artists Reid collaborated with and inspired, such as a totem pole carved as a tribute to Bill Reid by James Hart, and the large carved box created by Don Yeomans to carry his ashes to their final resting place in his mother’s village of Tanu.

Exiting the Bill Reid Gallery, I felt an immense sense of respect for Bill Reid, who did so much to celebrate and reinvigorate the culture and traditions of indigenous people throughout the Northwest Coast. My time there also fed my long-standing dream of visiting his ancestral lands of Haida Gwaii, where totems still sleep in silent cedars. This kind of inspiration, I find, fuels the best kind of journeys.

The Bill Reid Gallery is located downtown Vancouver, B.C. at 639 Hornby Street. Hours of operation are currently Wednesday – Sunday, 11am to 5pm. The next featured exhibition, opening March 29 and running through September 9, is That Which Makes Us Haida: The Haida Language. According to the gallery, the exhibition “celebrates the last remaining fluent speakers of the Haida language and explores the three remaining dialects found in Alaska, Old Massett and Skidegate through portraits and audio interviews with the last fluent speakers in these communities.”