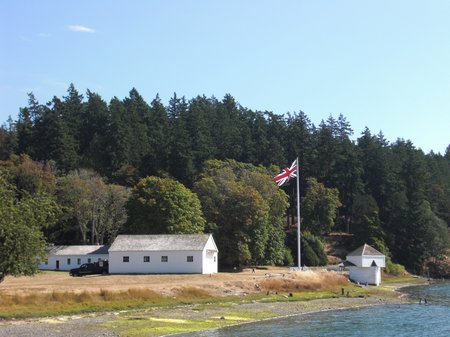 Yes, folks, that is a Union Jack flying over sovereign American territory under the permission of the U.S. government. The flag and flagpole were provided by Her Majesty’s Government as a sign of friendship. This flag of the United Kingdom of Great Britain and Northern Ireland flies over English Camp on the San Juan Islands. (You’ll excuse me for using the full title of the U.K. – being an Irish expat I’ve had to explain the political subtleties of the British Isles more times than I’d care to count. I find it’s helpful to be explicit).

English Camp, on the north-westerly side of San Juan Island is half of the San Juan Island National Historic Park, the other half being American Camp which lies on a south-easterly promontory. These sites were where the English and American garrisons respectively encamped during the negotiations over sovereignty of the Islands. This historical blip is known as the Pig War (1859 – 1872) since the matter of which flag really should fly over the San Juans was brought to a head when an American settler killed a trespassing pig owned by the Hudson Bay Company in June 1859.

Where else does the Union Jack fly in the USA?

When we visited English Camp over Labor Day weekend we chatted to one of the friendly rangers about the history of the place. During the conversation, he mentioned that English Camp is one of two places in the U.S. where the National Park Service flies the Union Jack on it’s own. Do you know the name of the other park? Leave your guess in the comments below.