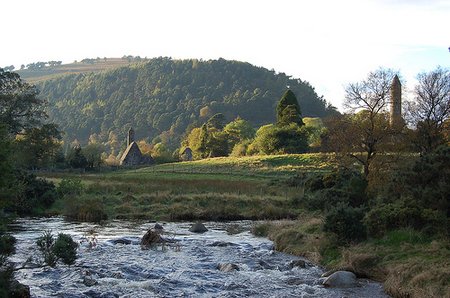 October 4th being National Trails Day in Ireland we took ourselves off to Glendalough, Co Wicklow to support this worthwhile event and to give the Small Boy more practice in his new backpack.

We chose Glendalough because it ticks a number of boxes for walking/hiking with an infant. For one thing It is an easy commute from Dublin, so there’s no real interruption to sleeping schedules if your infant takes a nap en route. There is ample parking as well as good baby-changing/diapering facilities in the Visitors Centre. The trails are also well marked with plenty of rest areas and benches for quick pit-stops and feeds. Finally, though some trails ascend the hills either side of the lakes you can, if you are feeling less energetic, just walk the paths between the two lakes and admire the views. 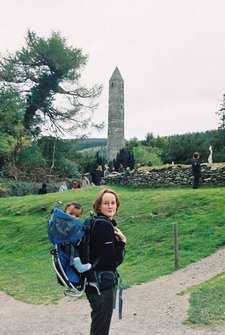 Glendalough which derives its name from the Gaelic, Gleann Da Lough or Glen of the two lakes, is one of my favourite places because it is beautiful in any weather and because it is rich in geography, history, myth and legend. The valley was carved out by glaciers during the last Ice Age with the two lakes emerging when the ice eventually thawed. It boasts one of Ireland’s earliest Christian monastic settlements built in the 6th Century by St. Kevin about whom there are a host of legends, not least that he lived as a hermit in a cave above the lakes, was pursued by a blue eyed woman called Kathleen and lived to be 120! The remains of the monastic city are nonetheless impressive, and include a 30 meter round tower, priests’ house and “cathedral”.

For our National Trails Day walk, we stuck to the lake paths and wandered around the shores of the upper lake for a while before the Small Boy started to let us know he had had enough. For those with older children used to walking, our favourite hike is the 5k Glendalough Miners Walk. This is a popular trail which loops around from the upper car park past the deserted miners settlement. Not only has this trail the best views back down over the two lakes and the monastic city there is also a herd of wild deer which we’ve been lucky enough to see from time to time!