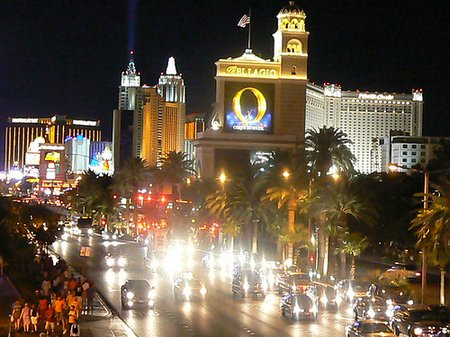 The Bellagio was my home for a long week this past August. Well, it was my home from 6am until late every evening where I was working at the Virtuoso Travel Mart conference, but thankfully (for my sanity) I was actually staying at the MGM Signature. Since I was working, my trip to Las Vegas was fully paid for by Virtuoso. My husband and children planned their road trip around my conference so that we could have a couple of days together in Las Vegas before they continued their loop around the Western U.S.

I’d been to Las Vegas twice before but both times for less than 48 hours so until this trip, I really hadn’t explored the city at all – not even the infamous Las Vegas Strip. I had also never considered Vegas as a family destination and was really not sure whether I was ready to experience the sights and sounds of Las Vegas through the eyes of a teenage boy. What did the kids think? I think this video clip says it all…

Leaving Seattle from wandermom on Vimeo.

In the four days I was in Las Vegas before my family arrived I couldn’t help but evaluate everything I saw through a fairly critical mom filter. I was abhorred by the street hawkers passing out business card-sized pictures of almost naked women. I’ve seen a lot of drunken behavior in my time, but it was particularly jarring to see families with young children in strollers sharing the street with groups of guys (and gals) who were far from sober – although still with beers in hand. I knew my boys would complain about the “nasty cigarrette smoke” in the hotels but I wasn’t sure how they would react to the lights and sounds of the casino floor.

The Las Vegas Strip is an expensive place to eat and drink and, in mid-summer, the lines at restaurants were long. I chatted to a local travel agent to get some ideas for off-strip dining. On my daily taxi ride from conference to hotel the taxi drivers provided plenty of ideas for family-friendly entertainments in Las Vegas while avoiding some of the seamier sights including the aquarium at Mandalay Bay and the Adventuredome at Circus Circus. Many of these drivers also lectured me on the many reasons why I shouldn’t bring my family to Las Vegas. “I didn’t let my children anywhere near the Strip until they were over 18”, “I don’t understand what people are thinking pushing strollers along the Strip late at night” were two comments I heard a number of times.

I chose to stay at the Signature at MGM Grand because with two growing boys a standard hotel room can feel pretty cramped. Instead, we had a spacious, one-bedroom suite with a full kitchen for $130 per night. This was fantastic value. In addition to large, comfortable rooms, the Signature is non-smoking and does not have a casino floor.

There is an air-conditioned walkway connecting the Signature to the MGM Grand for gambling, dining and entertainment. Although the Signature has three, small, private pools – one per tower – guests also have access to the extensive pool complex at the MGM Grand.

My family arrived late Wednesday and I had to work on Thursday so we really only spent one full day together exploring Las Vegas. We started with a buffet breakfast in the MGM Grand ($13.99/adult, $6.99 kids 4-12). I’m not a big fan of all-you-can-eat buffets since the food is generally mediocre and really, you can’t eat all that much more than you would at a standard meal. However, we’ve found that a buffet breakfast is a great way to start a busy day sightseeing with our children which sometimes means we don’t need to stop for lunch.

After breakfast we walked through the MGM Grand to New York, New York without going outside – which was a life-saver in the heat of the August sun. The kids got a kick out of the Jersey boardwalk area in NYNY – although they had no idea it was a simulated Jersey boardwalk. They could have spent a long time (and a lot of money) enjoying the array of kid-friendly games on offer but thankfully there was a rollercoaster to check out. If you like rollercoasters, you won’t be disappointed with this one. If, like me, you’d rather stick pins in your eyes than ever strap yourself into a cart which trundles at speed along a single, elevated track, hangs you off said track at odd angles and hurls you upside-down, you can commiserate with me as I pat myself on the back for having taken the ride with BigB. I consider it a very large deposit in my own parental karma bank.

So far, so good. We’d avoided the Strip at night entirely. The boys had walked around the casino floor as if it were the most normal thing in the world but hadn’t shown even the slightest inclination to check out any of the machines. Since we’d all enjoyed the Penn + Teller show the night before and were flagging after walking miles through casinos, we spent the afternoon at the MGM Grand pool complex. The kids had a blast. It was amazing: I was bothered by the groups of people lounging in the lazy river with buckets of beer, flirting and making out as if the future of mankind was at stake. My kids didn’t even notice. I guess a lazy river, a fake waterfall and a selection of pools was enough to entertain them to the exclusion of everything else. I retreated to my lounger and pondered on the conundrum of trying to protect a child from seeing something he or she doesn’t even notice.

All-in-all, Las Vegas was a success for us. Does that make it an ideal destination for every family? Probably not. If you’re considering a trip, I hope this post has given you some ideas for family-friendly activities – and a suggestion for an excellent place to stay.