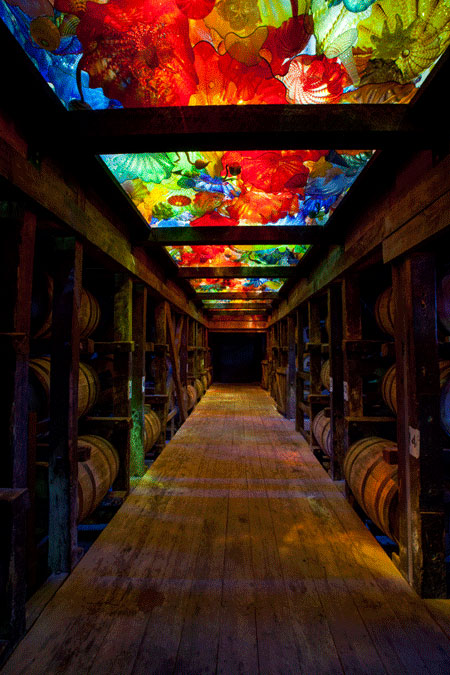 This past summer, I had the opportunity to visit Kentucky and tour the Kentucky Bourbon Trail. Formed in 1999 by the Kentucky Distillers Association, the Bourbon Trail is a collection of seven distilleries—Town Branch, Woodford Reserve, Wild Turkey, Four Roses, Maker’s Mark, Heaven Hill, and Jim Beam—stretching about 70 miles between Lexington and Louisville. Each distillery offers tours in which guests learn about the mechanical and chemical processes involved in making bourbon. Visitors also get to view the bourbon being made and wander through the rickhouses, where thousands of barrels of bourbon are stored in climate-controlled environments during the long aging process. And while each tour varies based on the distillery’s size, architectural style, and on-site facilities (for example, Four Roses does not age its barrels on property, so there’s no rickhouse to visit), one thing is certain, after visiting three or four distilleries in a day, the rickhouses all start to look the same.

But now, visitors to Maker’s Mark are in for a special treat. In celebration of its 60th anniversary, Maker’s Mark has teamed with legendary glass artist Dale Chihuly to present The Spirit of the Maker, a stunning 36- by 6-foot ceiling installation inside the rickhouse that connects to the tasting rooms. (All of the distilleries on the Bourbon Trail offer free tastings of their spirits—another great reason to take the tours!) 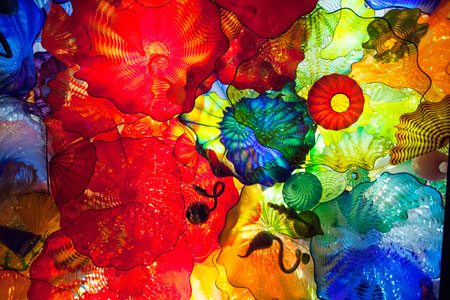 Opened to the public on March 27, The Spirit of the Maker is the first major installation of Chihuly’s work on public view in Kentucky. Resembling the artist’s famed ceiling installation in the Bellagio in Las Vegas, the creation is made of about 1,300 individual pieces of glass. Its colors—blue for water, amber and green for corn and wheat, and red for the distillery’s signature wax—were specifically chosen to represent bourbon and Maker’s Mark. 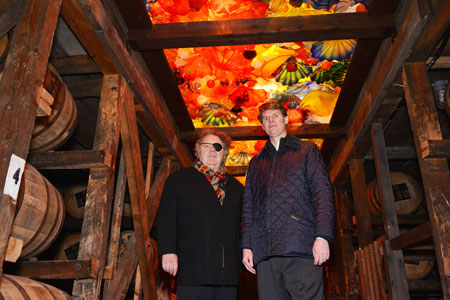 “We wanted to further enhance the distillery experience for all visitors by offering something that was distinctive to any distillery anywhere in the world,” said Maker’s Mark Chief Operating Office Rob Samuels (seen above on right with Dale Chihuly), whose grandparents Margie and Bill Samuels, Sr., founded the historic distillery. 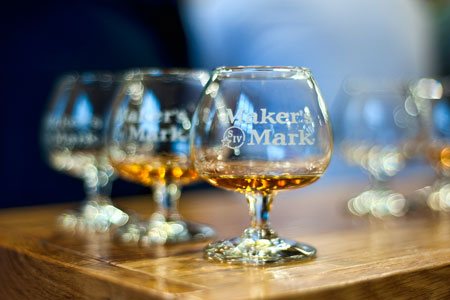 Founded in 1954 in Loretto, Kentucky, the Maker’s Mark distillery was designated a National Historic Landmark in 1980. Today, it is one of Kentucky’s most popular tourist attractions, welcoming more than 120,000 visitors annually.

In addition to The Spirit of the Maker, the distillery is in the final stages of completing a permanent exhibition of historic artifacts to enhance the visitor experience, which will include the original pot still that Bill Samuels, Sr., used to handcraft his first batch of Maker’s Mark; the first Maker’s Mark barrel ever made; and an exact replica of the original papier-mâché bottle designed by Margie Samuels. For those who don’t know, Margie was responsible for creating the Maker’s Mark name and look, including the label, font, and iconic red wax that each bottle is still hand-dipped in today.