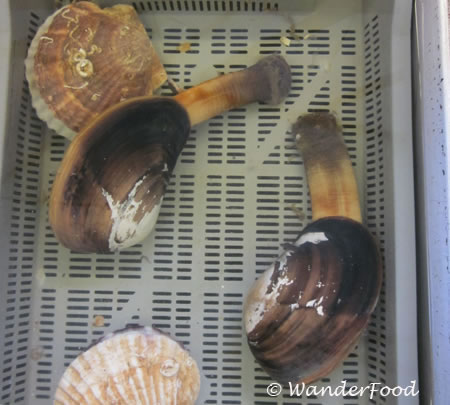 This is mother nature at her best.

Here in the Pacific Northwest, we are well aware of what a geoduck is, but for those uninitiated, it is, indeed and edible clam. And, no, this photo is not Photoshopped using pics posted by Anthony Wiener.

The Geoduck (oddly, it’s pronounced gooey-duck) is actually the longest living organism with an average life span of 146 years. This, the largest burrowing clam generally weighs about 3 pounds when mature. It’s considered a delicacy in parts of Asia where, can you guess, it’s thought to be an aphrodesiac. The demand for it in China, Korea and Japan has made it a big business in Washington State and Western Canada. I took this photo at Granville Island in Vancouver, by the way.

Can’t say that I’ve ever tasted geoduck myself. And it’ safe to say, I never will!