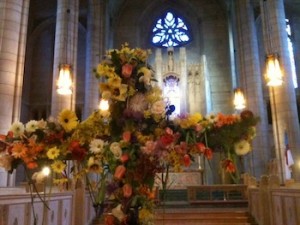 It pleases me that the code for the Grand Rapids, MI airport is GRR. What a nice, primal sound. I was welcomed to Michigan’s West Coast by a sign above the GRR baggage carousel. I knew that Michigan had a mitten part and an upper part, but I hadn’t thought about its coasts.

I’m in GRR for the Festival of Faith and Writing at Calvin College and still ringing from Jonathan Safran Foer’s speech. This is my first trip to Michigan, other than passes through the Detroit airport (pronounced Dee-troit by my grandmother).

Today I’ve passed several older ladies with conference lanyards, ladies who can get away with questions like, “where are you from?” to the Bosnian cashier in the student union and “How tall are you?” to the 6’9″ conference center worker setting up a round table for our workshop. That’s not to say that there aren’t plenty of young people here, too. But at the chapel service this morning, led by poet Luci Shaw, I looked around at the backs of many silver heads and thought, yes, this is about the usual proportion for a church. 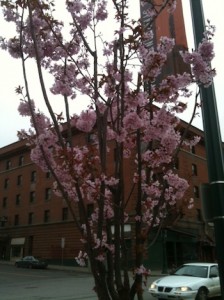 You may have suspected, from the photo at the top of this post, that I’ve been heading in a churchy direction all along. In Spokane, I’ve been singing in an Episcopal choir for the last few months. I’m unofficially Episcopalian, though no one is asking for proof, which is one of the reasons I really like this place.

The Sunday after Easter, St. John’s hosts an Easter egg hunt, which explains the spike in attendance for the children’s service, and something called the Flowering of the Cross. I’ve done some time in Sunday School and in a variety of churches, including several Episcopal ones.  I love the words, the lofty scripted prayers, the flurry of candles and hymnals before we process into the cathedral. But this Flowering of the Cross business was new to me.

Billie, one of the altos, gave me a daffodil. “You’ll need it,” she said. Ushers also had a bucket of flowers. Some of the choir members brought tulips and lilacs from their gardens. We walked into the cathedral with flowers tucked under our open hymnals.

In the chancel stood a wooden cross six feet high. Into the cross were drilled holes the size of nickels. The modest crowd threaded the holes with flowers on their way to the high altar for communion. I took the picture above after the service, when the perfume filled the quiet room. This flowering cross came just days before Spokane’s trees bloomed, such as the pink one I passed downtown.