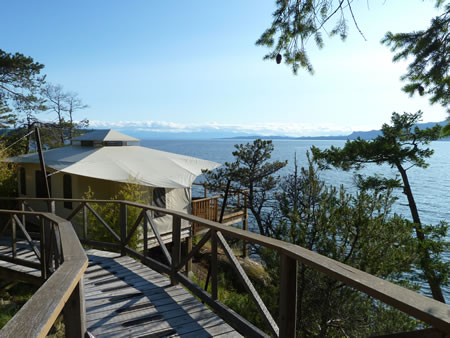 There’s a scene in the pilot of the recently-aired Battlestar Galactica remake where two characters are in a room filled with windows framing the most incredible coastal view. It’s the fictional planet of Caprica, an idyllic land about to bear the brunt of the evil Cylons. Their intense dialogue is crucial to the plot of the series, but I had a hard time catching the important details. I could never get past the jaw-dropping scenery outside those windows. It was mesmorizing and it stuck in my mind. Where is that? I kept wondering. I want to go there.

That was filmed on BC’s Sunshine Coast.

When I arrived at my tenthouse suite at Rockwater Secret Cove Resort on B.C.’s Halfmoon Bay, I was in total 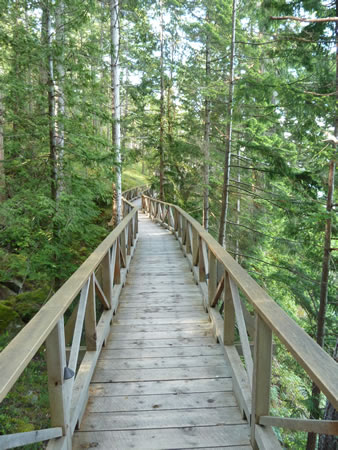 awe. The settings was just as spectacular as it had looked when I drooled over their website. Meandering along a winding wooden walkway through the trees, I passed through the Forest of Endor only to arrive at my tent suite and discover that I essentially had Gaius Baltar’s Caprica view. A bald eagle sighting within moments of stepping out onto the expansive deck topped it… my Nerd-o-Meter was off the charts.

Exploring my sweet tenthouse suite, the geek-out overload had me scurrying around like a kid amped up on pixie stix. I was so thrilled by my accommodations, I didn’t know what to do first. Fill up the spa tub and take in the view while chromotherapy lights created a feel-good disco party for one? Order up room service to my tent just for the luxury factor? Crank up the heated slate floors and pad around barefoot for a therapeutic foot treatment? The tenthouse suites at Rockwater are so well-outfitted that it’s often difficult to remember that this little world of luxury and comfort is contained within canvas walls and perched on a platform.

I opened the doors to the vast and wonderful waterfront patio wide, listened to the gentle waves lapping up on the rocks below me, and sunk down into the impossibly sublime king-sized bed…and promptly feel asleep under the watch of kindly sci-fi forest dwellers, sure to keep Cyclons, Stormtroopers or any other evil forces at bay. 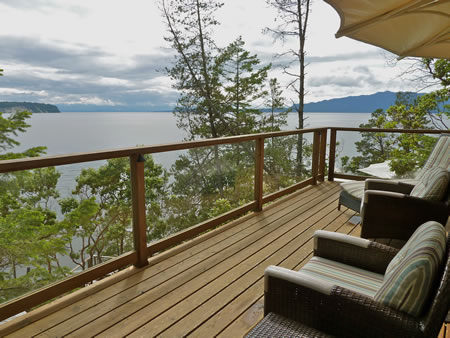 Oh and what a sweet sleep it was. In fact, deep peaceful relaxation became the absolute modus operandi for my stay. You’ll have to excuse my wild sci-fi imagination, but this is a place that feels otherworldly, and inspires creativity and belief in mythical things. This is just the type of place you’d want to hole up and write the Great American Novel.

I’m a big fan of tents, yurts and the like as an alternate form of lodging. It allows you to get closer, to stay within the natural habitat — the main attraction in a place like the Sunshine Coast. Lulled to sleep by the sound of the surf and awaking to fir branches brushing the canvas walls in a gentle breeze, this is a great way to immerse yourself in a special setting. 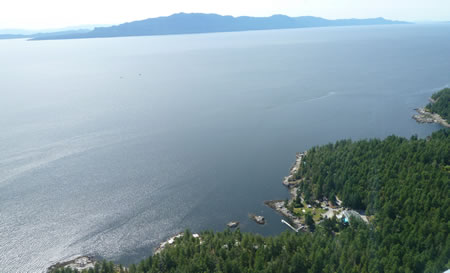 Traversing the network of elevated boardwalk paths, nestled in the trees, between the tent suites and the main hotel area adds to the Ewok Village feel. I was consistently late for every meal; I always miscalculated the stroll time along these magic pathways. The sweet vistas and gorgeous trees to ponder along the way force everyone to slow down…and savor. 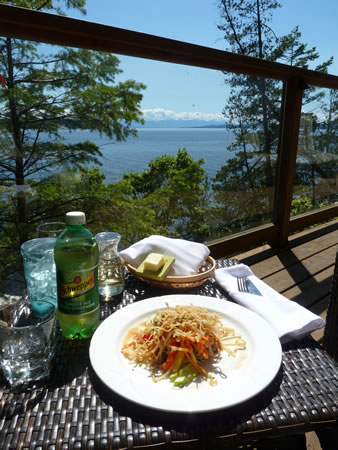 Staying at Rockwater means drinking in the incredible surroundings in every way possible. At the Spa Without Walls I listened to a chatty ravens cajole each other over in the bay just steps away while experiencing an ancient Ayurvedic massage. When I returned too late from a horseback ride to make lunch, a soft ring on a bell outside my tent announced the arrival of a delightful noodle salad and chilled wine, and I dined al fresco with a killer view from my deck. Room service to a tent? It’s an unknown pleasure I’ll not soon forget.

Speaking of savory things…I have to tell you about the food! But so enamored was I with the fresh, locally-based culinary delights experiences at Rockwater that I’m going to have to devote an upcoming post to the subject. Stay tuned, and don’t come back hungry.

Sadly, a short spate of inclement weather cancelled plans to explore the coastline with Halfmoon Sea Kayaks and I didn’t have a chance to explore any of the dozens of hiking trails running into the surrounding wilds of the Sunshine Coast. But that leaves new adventures to look forward to next time. Oh yes, I will be back.

In addition to the tenthouse suites, Rockwater Secret Cove Resort offers ocean view cabins and lodge rooms. More information is available on their website, along with those drool-inducing photos. My stay was hosted by Tourism BC and Spectacular Ink.