Home / Adoption / For better, for worse…and everything in between
« SEX in the garden! |
Main
| Bird Nerd »

My first date with Big Papa was a ferry ride to Bainbridge Island, our second date was dinner at a Cajun restaurant, and our third date was an afternoon of yard work. It was mid-January and I remember spending a few hours outdoors in the brisk air raking up the leaves that covered his small backyard like a wet brown blanket. It felt so comfortable, the two of us working side by side, and I thought to myself: I could be happy with a lifetime of days just like this, with him.

When I look back over the six years we’ve been a couple, four now as husband and wife, my fondest memories are often the simplest of moments. While I love romance as much as the next girl—dinners out, vacations to exotic and interesting locales, I’m continually reminded it’s the day-to-day living, rather than grand gestures, that truly cement a relationship. For one, it’s not possible to exist indefinitely in a heightened state of passionate escape. Laundry needs to be done, groceries have to be purchased, and that little thing called life manages to jolt even the most starry-eyed lovers back to reality.

I’ve heard people say the true test of a relationship is to take a trip together, see how compatible you really are by putting yourselves in unfamiliar territory while having random unexpected situations thrown your way. I think there’s some truth to this, but also believe you can just as easily find out what your relationship is made of by facing the mundane negotiations of everyday existence, with a few extraordinary catastrophes thrown in for good measure. In my experience, it’s a lot easier to like someone while suffering from jet lag and sipping espresso at a café in Paris, than after a long, stressful week at the office.

That being said, we’ve had ample opportunity to see how our relationship will fare when faced with the trials of life on the road…or in a boat. Big Papa still reminds me that he suggested a ferry ride for our first date, because he figured if we didn’t like each other one of us could head to the bow and the other to the stern, and never the twain shall meet again. Fortunately, that’s not how our date ended.

We’ve traveled together to Canada, France, Armenia, China, Tibet, Hawaii, California, the east coast, and all over the Pacific Northwest. But the one trip that stands out as a testament to our relationship is the trip we took barely two months before we were married, when we flew to Tampa, Florida and then drove to Ocala, to move my elderly disabled father out to Seattle. He had just been released from a rehabilitation facility where he’d been off and on the past few years due to a series of falls. “Operation spring-the-Pop” is what we called it. Fly out on a Friday, pick him up from the rehab facility on Saturday, pack what we could into the four empty suitcases we’d brought with us, and fly back to Seattle with him on Sunday.

On the first leg of the journey from Tampa to Charlotte, North Carolina, dad did just fine. Then, soon after take-off on the second six-hour leg of the journey, he started complaining of pain in his chest and abdomen. Worst case scenarios played through my head and I chastised myself for underestimating the enormity of this undertaking. Soon my father was in considerable pain and asked to be taken to the toilet. Big Papa had bought us first-class tickets, so that in the event of a bathroom jaunt, we wouldn’t have to wrestle my paralyzed father past scores of other passengers only to wait in a long line for the loo. Unfortunately, dad had the runs for the remainder of our trip. I stood holding a blue airplane blanket between my outspread arms to block the view from the other first-class passengers because my father, with his paralyzed leg in a brace, couldn’t fit in the bathroom and close the door. Right beside him stood Big Papa. He cleaned and changed my father, and then cleaned and changed him again for the duration of the flight.

First class passengers who needed to use the facilities were diverted to the back of the plane. Thankfully, no one made a fuss and most of those sitting with us in the small first class cabin seemed sympathetic to our plight. It was a tough journey, the first of several we’ve experienced together.

If there had been someone available to marry us on that plane, I would have said “I do” on the spot, at 30,000 feet. There is nothing anyone has ever done for me that speaks such volumes about the content of their character. If Big Papa could do this for my dad, I knew he would stand by me—for better or for worse.

Of course, as some of you might remember from reading my blog, our wedding was one unbelievable fiasco after another. The first wedding site canceled six months before our ceremony, then the B&B where we were going to stay for our wedding night went out of business a month prior and finally, our officiate canceled merely three hours before we were going to exchange our vows.

When we managed to find someone to pronounce us man and wife, with barely an hour to spare, and I walked toward the man I would marry, tears rolled down my cheeks, tears of joy. Sure, I wish the road to matrimony had been smoother. Who wouldn’t have? And, yes, there have been many days since, when I’ve desperately hoped for a break from all the crises and heartache we’ve experienced. The thing is, no one gets through this life, or a marriage, without loss, without disappointment. Some are hit with more than others, but none of us escape entirely. In the midst of what sometimes feels like unrelenting challenges, I remind myself how lucky I am in so many ways. Finding Big Papa is one of them.

For much of the year here in the Pacific Northwest, clouds roll in and the rain comes down. Sometimes it lasts for days on end, this year right through summer. And then, from time to time, there are glorious days when the sun appears and Big Papa and I head together into the yard, now our yard. Side by side we tend to our garden and care for our plants. They continue to grow, despite the hardships they encounter, and so does our relationship.

A marriage is for better and for worse. But mostly it’s for everything in between. 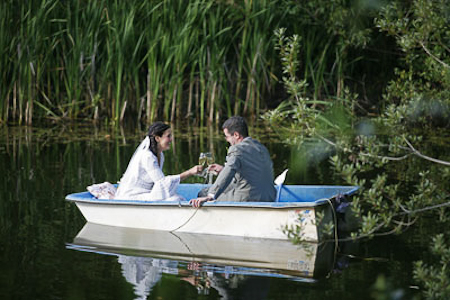 Whether we’re on the high slopes of Everest or at the top of the hill in the Central District, I’m so glad you’re traveling beside me.