Part I of V

All hail the Internet! Without it, Big Papa might never have entered my life. When we met, I’d been dabbling with online dating on and off for several years. On New Year’s Day, 2005, I was about to head into an off phase. I needed a break. A spell of disastrous dates had dealt my self-esteem a serious blow and I wanted off the Match.com merry-go-round. 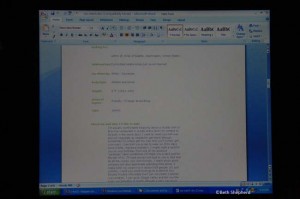 The New Year began with me purging all the emails from ‘prospects’ I’d corresponded with in recent months. Then I canceled my membership. I was informed that my profile would remain up for three days before I would fade into Match.com history.

As a parting gesture, I ceremoniously sent one final e-mail into the ether to a guy whose profile said he found that “pulling weeds was therapeutic.”Salt of the earth, I liked that. My e-mail read, “In three days I’ll be a Match.goner. If something in my profile piques your interest, my home e-mail is…”

A reply was in my in-box the next morning. For the next few days, little missives were exchanged, and we discovered a bit about each other. We both moved to Seattle from similar cities on the east coast in 1985. We’d each done a few-year stint in California. I had two cats and he had one (big points for being a guy with a cat). He also lived barely a mile from my apartment, which meant he was geographically desirable, as a former boss used to say.

We decided to meet in person and bypass the awkward, “Let’s chat on the phone” stage of the blind dating process. Sick of coffee dates that felt like job interviews, I asked if he would suggest “something more unique” for our first get together. He responded with, “How about a ferry ride?” Brilliant! I love to ride the ferry and this adventure sounded like fun, albeit that it was early January and snow was in the forecast. Some months later, we both confessed to each other that we’d had second thoughts. Big Papa told me he’d mused to himself, “Why waste a perfectly good Sunday on something that isn’t likely to go anywhere.” 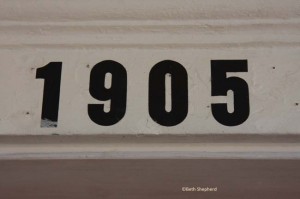 Our rendezvous was set for Sunday, January 9, 2005. I offered up transportation to the ferry and Big Papa gave me his address. His house number was 1-9-0-5.

So, on 1-9-05, I drove up to 1905 and picked him up. My first impression was that the Urban Cabin was cute and homey. Standing in the doorway, I saw two Edward Hopper prints, one of my favorite painters. I like the colors in Big Papa’s home. It looked like a place where I’d feel comfortable. It also didn’t hurt that I thought Big Papa was pretty handsome too.

He got into my car. I was nervous. He was nervous. Off we drove to the Bainbridge Island ferry. As we chatted more, we both relaxed. I had a feeling of ease and familiarity. Talking with Big Papa was as comfortable as standing in the doorway of the Urban Cabin.

The ferry ride led to wine tasting at the Bainbridge Island Winery, which led to hanging out at Fay Bainbridge State Park and eating cheese and frozen chocolate truffles (remember, this was early January), which led to dinner back in Seattle at Coastal Kitchen. 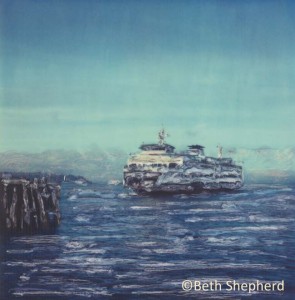 When I dropped Big Papa off at the Urban Cabin, some eight hours later, we kissed goodbye. He told me he enjoyed our time together and wanted to go on a second date. Driving back to my apartment, I realized I felt none of the first-date angst that so often accompanied online dating. Did he like me? Yes, I felt fairly confident he did. Would he really call me to get together again? Yes, I was pretty sure he would. Honestly, it was the best dang date I’d ever been on.

I smiled to myself as I reminisced about our first date on 1-9-05. I smiled bigger as I thought about Big Papa and 1905, the Urban Cabin. After many years of wandering, it felt like I’d finally come home.