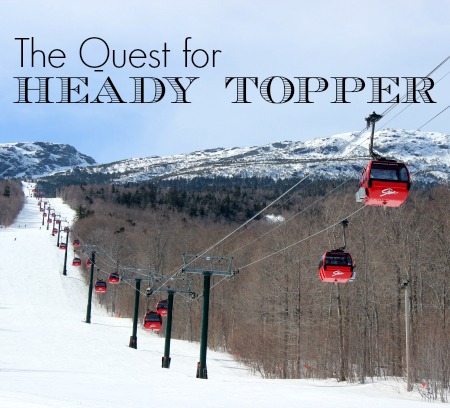 If you’ve never heard of Heady Topper, beer clearly is not a top priority. For skiers, beer figures at the top of a list that would certainly contain: skiing, fun, bedroom aerobics, more skiing, sleep, skiing again. Heady Topper, brewed by The Alchemist, had me facing a particular dilemma of recent: go for another day of skiing at beautiful Stowe (VT) or chase a fine, hoppy brew. As I’m sure you guessed, I choose the latter. Shocking, I know. As much as the thought of obtaining what is currently recognized as the “Best Beer in the World” (as per beeradvocate.com) was enticing, I was more interested in figuring out where it could be found.

I had had my first sip of The Alchemist’s brew at a small restaurant in downtown Stowe, just the night before. I truly did not expect it to live up to the hype. The assumption was that it would be palatable but that it couldn’t feasibly uphold the high standard to which it is held. I was wrong. Certainly, being a lover of hops does impact on one’s appreciation of Heady Topper. However, I would bet that even the less adventurous beer aficionado would enjoy the subtle tropical fruit notes and gentle hoppiness of the supposed “best beer.” To say that it is unequalled would be a stretch, but it’s not hard to understand why it’s so celebrated once it hits your lips.

The true heart of this story lies in the search for its points of sale. This, let me tell you was no easy feat. True, I didn’t do much research before setting out, taking on my habitual “I’ll just wing it” attitude. My first clue came from a convenience store In Waterbury (VT). On the drive up to Stowe, we stopped in for some snacks and saw the itty bitty little sticker that set the gears in motion. It read: “Authorized Heady Topper Retailer.” Asking the store clerk if they had any in stock, we got a smirk. Evidently, he was bemused by the silly outsiders that clearly didn’t have a clue. The fact is, The Alchemist’s one and only current brew sells out within hours of being unloaded from the truck. He did, however, politely inform us that deliveries arrived between 11am and 1pm on Wednesdays. 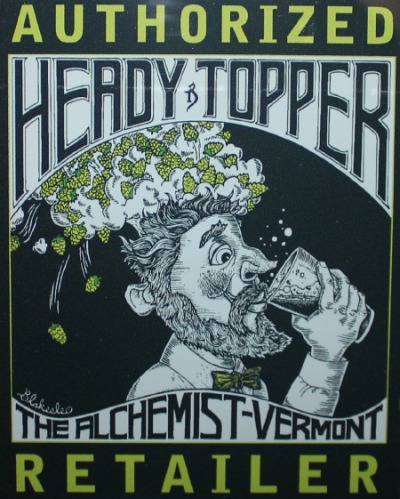 With that in mind, I set out towards Waterbury on Wednesday morning. Just as I pulled into town, what should happen to cross my path but a bright green, hops covered delivery truck? The Alchemist’s distribution vehicle, of course. So I followed. Feeling like paparazzi chasing a starlet, I trailed the truck to the Waterbury Village Market. I walked straight inside and marched up to the cashier; she did not seem the least bit surprised when I asked where I could find the beer aisle. I paced around the area, waiting for it to come out, chatting aimlessly with one of the market employees. Smiling at me, he asked me to wait a minute and he ducked into the back-store. Out he came, triumphantly handing me two four packs, the sales limit per adult. Score one for me, before it even hit the shelves.

The truck had already left the building by the time I got out. No more creepy stalking for me that day. Instead I wandered in and out of several other stores, empty handed.

Glancing at my watch, it was coming up on eleven so I headed to the convenience store I originally set out for. I pulled up next to a yellow Jeep, with two twenty-somethings playfully shoving each other and laughing in the front seat. No sign of the beer yet, so I settled into my car with a book for the wait. Time passed, and the passengers of the yellow Jeep were still giggling away. It became clear to me that we were on the same mission. On cue, the girl in the driver’s seat turns towards me and smiles knowingly. Two hours later, we were both walking out with our loot: two four packs, again. 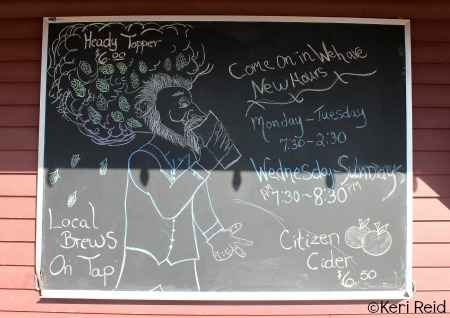 I managed to find two other locations after that who sold Heady Topper. Unfortunately for me, their delivery days were not Wednesday. My total take for the day: four four packs.

I called the brewery and quickly discovered that they were not open to the public. They are currently working on opening a pub on location. The best part of all this? As I got to putting this piece together, The Alchemist updated their website to include all the sales locations. Oh, the irony. Several vendors even offer full cases, which would save you having to run to multiple places if you’re looking for a higher payoff… although it was exciting!

Stay up-to-date on all things snow by following me on Twitter or RSS/email.