Home / Uncategorized / Is it Legal to Drink Your Own Alcohol on a Flight?
« Tanked Turkey: Booze-Infused Thanksgiving Turkey Recipes |
Main
| Holiday Gift Guide: 6 Accessories for the Lady Who Likes Her Liquor » 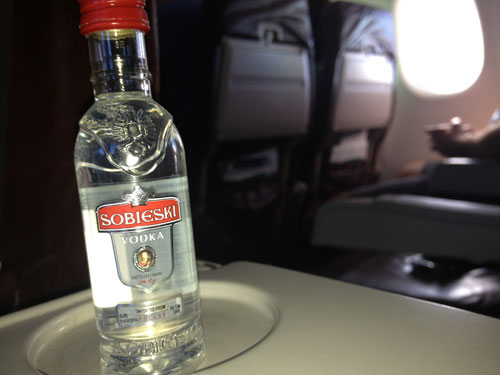 On a flight home from visiting the Bourbon Trail in Kentucky, my purse was full of mini-bottles of bourbon. At each distillery, I bought a few as souvenirs. When the drink cart came around, I ordered a glass of ice and ginger ale on the side (whiskey & ginger ale is a great combo, also known as a Jack & Ginger).

This was not the first time I packed my own mini bottles or flask. I popped a Four Roses bourbon open and began to mix my own drink. A flight attendant behind me shouted, “MA’AM!” I just ignored it, thinking she was talking to a passenger behind me. “MA’AM,” even louder this time. At the third one, I turned around.

“You cannot drink your own alcohol on flight,” she said excitedly. My mouth dropped open in shock. She went on to interrogate me like I had a bomb on me about how many more bottles I had. I promised to not drink any more aboard the flight. With that, she spun on her heels and left.

This led me to an obsessive search online to find the answers as the situation seemed outrageous for two reasons: 1. I was embarrassed by the way the flight attendant loudly addressed me and the matter, making the issue very public to all the passengers around me. 2. I figured it was ‘not allowed’ on airlines to ensure they made more beverage sales rather than illegal.

After much research on blogs and airline sites, it was still unclear as to whether it was illegal or just an airline policy. What I did find out is many people had experienced the same thing, all on different airlines.

When I flew to La Paz, Mexico last Saturday, I figured I would clear it up once and for all. Vickie Brown, a spunky flight attendant on Alaska Airlines, would finally put my illegal vs against company policy question to rest.

“So, is it really ILLEGAL to drink your own booze on a plane,” I asked.

“It’s a federal offense to open up your own. You can bring your own, but you can’t open it.” 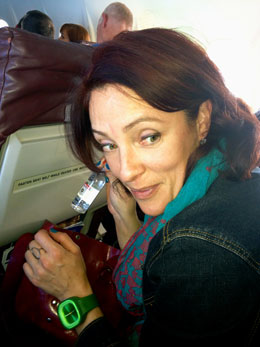 But that wasn’t the real shocker. This explanation why it was illegal to drink your own booze aboard a flight made perfect sense in fact.

Here it comes: If a flight attendant does write you up for it, you can be fined by the FAA (Federal Aviation Association) between $3000 – $5000. My mouth hung open for a good thirty seconds after Brown dropped that tidbit in my lap.

More horrible than the whopping fine is that an alert gets put by your name and every time you fly, you have to endure more scrutiny by security. And forget buying alcohol on any flight.

Lesson learned. It is VERY illegal to drink your own alcohol on a flight.

Thank you Vickie Brown of Alaska Airlines for your help in solving this pressing question I just had to know!

So, now I have some questions for you that I would love to hear from you on.