Three sure-fire ways to broadcast to the world that you are an American tourist: 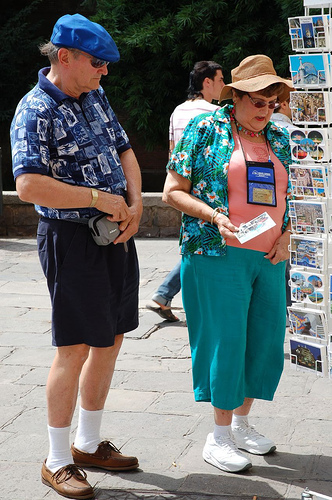 2. Speak loudly in a thick Yankee accent to try and overcompensate for the language gap

In a recent article in the Los Angeles Times, Rosemary McClure reported that Americans consistently “overtip outrageously” while overseas. Accustomed to our 18-20% norm here at home, many American travelers take their generosity on the road when traveling and do the same.

But is this really generosity, or just plain ignorance?

McClure points out that in many parts of the world, the average tip is much lower, and our 15% tips are tipping the scales. After awhile, locals will be expected to pony up a similar amount because of the precedent set by visitors.

Not only that, but in some regions such as Asia, tipping is actually considered impolite, as it is believed to infer that the person is hospitable enough to provide the service without the monetary persuasion.

The lesson here is to do your homework before traveling on the tipping customs in the areas you will be visiting and act accordingly. You may learn that the tip will already be included in your bill, as it often is in many European countries, or that tipping is simply inappropriate, as in places such as Vietnam. In those cases, a smile and a simple “thank you” in the local tongue will show your gratitude and honor the local way of doing things.