Home / WanderTales / Oceania / Water, Water Everywhere and Not a Drop to Drink 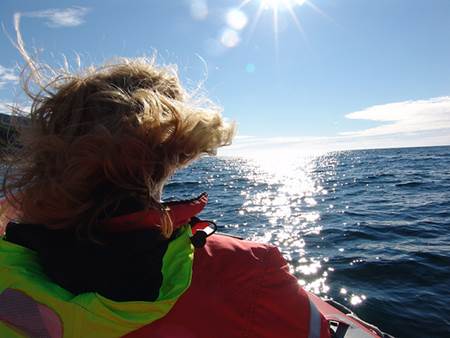 We know something is seriously wrong when James, our onboard engineer, jumps up from his bunk, claws his way into the salon and starts tearing cushions off the settee.

Just yesterday James, the engineer on board the Henri Lloyd racing yacht, assured us that the thirty-four buckets of water we emptied from the bilge were not a problem because he’d already fixed the blown hose on the water maker. So we breathed a sigh of relief and cracked jokes about the salt water enemas we’d have to give each other to survive if our water maker ever broke.

But that was yesterday. There is no joking around with James now. He isn’t smiling or offering reassurances that the water maker — our lifeline — is going to be okay. Instead, he’s muttering to himself as he rummages through his tool box and glares at the water maker, practically sweating. 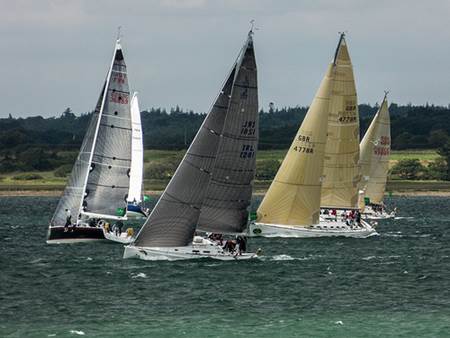 There are many things on board CV21 Henri Lloyd that we can live without until we get to Rio, which is still 1,800 miles away. For instance, the primary winch that broke on the way to Brest and never got fixed in time for the race start. Or the boat hook we lost overboard. Or the running back stay cleats that were never installed. Or even the spinnaker halyards that stripped on the in-mast rigging.

But a water maker is just not one of those things. We simply cannot live without water. And we can’t survive until Rio on the one 290-liter tank of water we have left.

Which is why, with excessive use of silicone, duct tape and industrial glue, James and crew are trying desperately to save our cracked and failing water maker. Even though we all know deep down the crack in the housing is irreparable.

So, once it’s confirmed that our water maker is well and truly dead, strict water rations are put into place — the crew is limited to one and a half liters per person per day. Which doesn’t sound that bad, but in the Tropics on the Equator with no wind, it takes about three liters a day just to stay mildly hydrated. 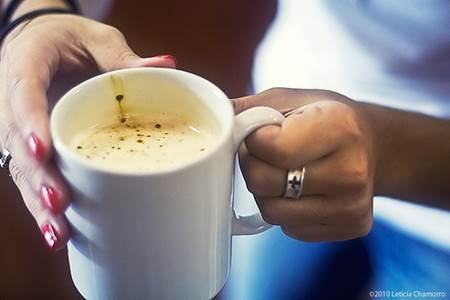 But I am okay with the water rations for the first few days. Okay, maybe the first day. Scrap that. It takes the first horrific caffeine-free night watch to realize what it actually means to do night watches without coffee. NO COFFEE. I furiously dig up my Clipper contract to see if depriving me of coffee is a violation of my rights.

Not to mention, my poor crew are now forced to meet the decaffeinated version of me — migraines, grumpiness and an uncanny ability to fall asleep whilst standing up. In essence, decaffeinated Tasha is a terrible night sailor.

Which is why I am incredibly grateful for two things:

1) The skipper’s decision to suspend racing and motor thirty miles back into the Doldrums to get a water transfer from Team OneDLL, whose water maker is one of the few in the fleet that are still working.

2) The monsoon rainstorm that results in collecting an additional four days’ water rations beyond what we get from OneDLL. Which means we can go back to drinking tea and coffee until Rio. Thank heavens! Literally.

When we practiced transfers between boats during my Level 3 Clipper Race Training, I never imagined we would actually use it. Much like doing man-overboard drills, I really hoped I would never have to use this skill in real life.

But sure enough, we find ourselves throwing our heaving line onto OneDLL’s deck so they can send jugs of water over to us on the other end of the line. Which is a cumbersome process that takes us about an hour for the water transfer and seven and a half hours in total for us to motor to OneDLL, receive the water on board, and motor back to where we started.

The only worry about doing the transfer is that we are in the first place position at the time, and we are taking a risk by motoring back into the Doldrums to pick up water. But we also don’t really have a choice. 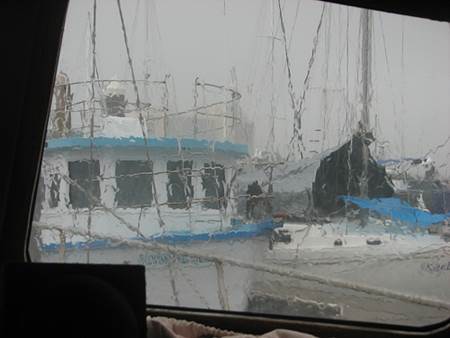 So, when the skies open up and deliver another four days of water to us via our boom cover turned upside down to collect rain pouring off our mainsail, I try not to think along the lines that we could have done without the water transfer after all.

If you’ve ever wondered what happens when a monsoon suddenly rains down on a crew of twenty parched, overheated sailors who’ve been counting the minutes until their next 500-milliliter water ration, I can tell you.

Shrieks of delight reverberate below deck as crew leap from their bunks and run up on deck with wild looks in their eyes, some holding cups and others clutching their dirty laundry. Most of the crew stand with their mouths open to the sky while bending down to scoop water from the floor onto their faces. Some grab bottles of shampoo and start scrubbing their hair and armpits while others just sit on deck in the rain, out of the way, laughing at the mayhem. The engineers turn every sheet of vinyl on board into gutters and funnels that run into every pot, pan and bowl available while shouting down to the galley to send up more.

In essence, the rain creates a mass hysteria comparable to that of a pub throwing free beer at its patrons. 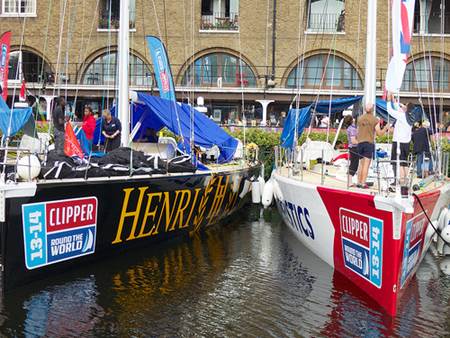 Meanwhile, I’m in the galley, digging the Nescafe out of the cupboard while rainwater boils in the kettle.

Let’s just say, when I signed up for the Clipper Race, I mentally prepared myself for the possibility of food deprivation, and even water rations on board.

But I never prepared myself for the possibility that I would have to give up my coffee. So, as I throw my third heaping scoop of Nescafe into my mug, I am grinning. My sanity has been restored and all is right with the world on Henri Lloyd.

Tasha is a sailing, adventuring, globe-trotting entrepreneur who writes about her travels at Turf To Surf. In the last year, Tasha and her husband Ryan have competed in the Clipper Round the World Yacht Race from the UK to Brazil and from South Africa to Australia, they’ve driven a camper van across Australia, lived in Bali for two months and now they’re in New York briefly doing work for their TEFL teacher training school, Teaching House, before heading back to their boat in the Dominican Republic. Follow Turf to Surf’s adventures on Facebook,Â TwitterÂ and Instagram.Â