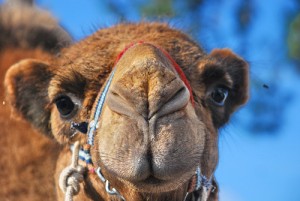 I’m in the Negev Desert, approaching a tent that must sleep hundreds. It’s enclosed on all sides by what look like thick woven blankets, and I see through an opening that the ground is lined with dozens of colorful patterned runners. Entering the tent, I can almost feel myself sheathed in a loose black robe. I imagine that I’ve just returned from an epic camel trek, and I’m about to lower myself to the ground to join family and friends for conversation over cardamom-spiced coffee.

But this daydream is interrupted by the people filtering in behind me–10 and then 20 and finally nearly 100–wearing blue jeans and sweatshirts, not traditional Bedouin garb. They are Americans, 18 to 26 years old, and they are five days into a free 10-day tour of Israel courtesy of the Birthright Israel Foundation.

I, much to my lament, am one of them.

Among the masses I see the tent and its trappings for what they are: a sort of Bedouin-themed amusement park. The wall coverings suddenly look like the Native American blankets sold at Interstate rest stops near my Midwestern hometown. The runners, which I now notice are plastic, seem like the sort of thing you could get at a dollar store. And look over there! It’s a real live Bedouin man grinding coffee beans with a mortar and pestle!

I wonder if anyone but me notices that peaking from beneath his seemingly traditional outfit are Adidas sneakers.

I am one of the nearly 200,000 young people to have received this trip. In giving it, Birthright Israel hopes to help strengthen our personal Jewish identity and forge a connection with our ancestral homeland, or so their website says. As someone with Jewish heritage who wasn’t raised in the tradition, I was indeed interested in these things, but to claim them as my primary motivation would be a lie. Mostly, I wanted to see Israel.

In college, gallivanting through Africa and Asia and Europe, I began to think of myself as a traveler, and not the sort who sips colorful drinks at tropical beaches. I avoided places tourists visited and instead lingered where locals lived. I hoped to do the same in Israel. Of course, my previous travels weren’t with a tour group, but back then I also wasn’t constrained by student loans and a full-time job that offered only two weeks of vacation. Now, a whirlwind group tour would have to suffice.

The trip began in Jerusalem. During our two-night stay we were scheduled to make not one, not two, but three visits to the Western Wall–somewhere I might not have seen at all if traveling on my own. But I had to go all three times. Venturing off on my own wasn’t allowed, and staying at the hotel wasn’t even an option, although inexplicably, four hours at the hotel was part of our itinerary one morning. I couldn’t believe no one else seemed to mind.Â  Then again, they were probably glad to have the morning to recuperate from drinking duty-free alcohol in their hotel rooms late into the night. Birthright Israel’s thinly veiled secondary aim, after all, is to serve as a matchmaker. In an introductory talk on our first day we were told time and again, only somewhat jokingly, to “make Jewish babies.” We were even promised a free honeymoon if we married someone we met on our trip.

But I had a boyfriend back home, and I wasn’t much of a drinker anyway, so I skipped the hotel room partying and headed to bed early in anticipation of the next day’s adventures. I didn’t expect those adventures to include four hours of standing at the hotel’s entrance, staring longingly out at the city I so desperately wanted to explore. Just across the street men sat outside a coffee shop. They talked and laughed and eventually, after spotting me, gestured for me to join them. I shook my head and shrugged my shoulders to signal that I couldn’t. The truth was, I wasn’t allowed to step further outside than the second tile beyond the door. Yes, that was the rule.

The only possible explanation I could dream up for our strict rules and strange itinerary was a shooting that had killed eight of the city’s students the day before we arrived. Maybe Birthright Israel was being cautious. I guess I could understand that, especially because it meant everything would change when we left Jerusalem for supposedly safer territory, right?

We spent nights three and four at a kibbutz, one of the back-to-the-land settlements that thrived in the ‘50s and ‘60s. I was intrigued by this alternative lifestyle, and on the bus ride there I imagined befriending a resident and spending an afternoon helping tend cabbages or collect eggs. I should have guessed, however, that we’d be assigned rooms far from the full-time inhabitants and would never cross their paths. Not that I had an afternoon to spend as I wished.

Maybe Birthright Israel was concerned with my safety, but I was beginning to wonder whether they were equally concerned with controlling my experience. I couldn’t begin to guess about the politics behind this gift I’d received, but I doubted it was in the foundation’s interest to let me see whatever I wanted and meet whomever I chose.

The others in my group seemed either not to notice or not to care about our lack of freedom.Â  After returning from our day’s activities, they drank and talked and laughed on patios long after I’d gone to bed. Part of me wanted to join them, but a bigger part of me was grumpy. I missed my boyfriend, and I was upset that I wasn’t experiencing Israel on my own terms. I felt like everything I was learning about the country and my Jewish heritage was somehow corrupted. I wasn’t having fun.

This grumpiness endured into Bedouin territory.

Here, we’re staying overnight in the large tent, one of several that make up the Mamshit Camel Ranch. More disappointments follow. The “camel trek” that promised to take me deep into the desert is more like a pony ride.Â  The “global musical festival” consists of a small band that drove from Tel Aviv for the gig. But at least here my movement isn’t restricted by tiles.

Late in the evening, when most of the other Birthrighters sneak into a Bat Mitzvah taking place in the next tent over, I seize the chance to finally head off on my own. I look for the ranch’s employees but they’re nowhere to be found. I end up instead at the camels’ pin, where several dozen animals are huddled together in the same corner. It’s the corner closest to their troughs but also (and I don’t think coincidentally) the corner furthest from the tents.

I approach the camels slowly, hesitantly, but they seem oblivious to my presence. I reach out to stroke the space above one’s nose. He keeps eating. So I pet another, and then another. Finally I step back a few feet and settle onto the ground, where the techno music from the Bat Mitzvah pulses beneath me. 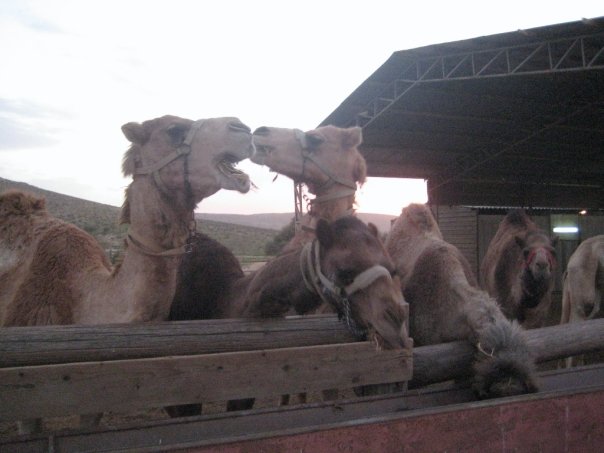 For a while I just sit, hugging my legs and studying the creatures. I wonder if they know it’s not customary for a camel to deliver 10-minute ride to tourist after tourist, only to be thanked by being kept awake late into the night.

Needless to say none respond, but I can’t help but imagine what they would say if they could. I find myself envisioning the scene as a New Yorker comic: the camels crowded near the right-hand side of the frame, pushing as far as possible from the music notes creeping in from the left. I picture a quote bubble above one of the camel’s heads, but before I can come up with a sardonic comment to fill it, my mind wanders back to the others in my group.

How can they be enjoying this trip as much as they seem?

I don’t know, and I won’t until I’m back home, when countless emails and pictures will be exchanged through our group email list. Looking at so many smiling faces, none of them mine, I’ll remember something.

Although part of the fun of my past travels has been blazing my own path, the other part has been the moments. Moments like being mistaken for a Londoner when riding the Tube all the way to the end of the line, or sitting beside a silversmith in Niger, admiring the silver dust left on my hands from whittling out a traditional cross. Moments, I would imagine, like staying up nearly all night bonding with new friends at a kibbutz, or crashing an Israeli Bat Mitzvah with people you didn’t know six days before but with whom you’re now as close as anyone.

I missed those moments, and I’ll miss countless others as well. I’m too busy bemoaning that this experience doesn’t conform to my expectation of travel that I’ve forgotten traveling is really about embracing all experiences.

Unfortunately, I don’t remember this in time to save myself from the restless night in a fake Bedouin tent and the five more days of grumpiness ahead of me, but at least I’ll leave Israel with one memorable moment to speak of.

For a while longer that night I sit in the Negev Desert, commiserating with the camels.

Alexis Wolff has been published in the New York Times, the Los Angeles Times, the Best Women’s Travel Writing and World Hum among other publications. She resides in Brooklyn, NY.