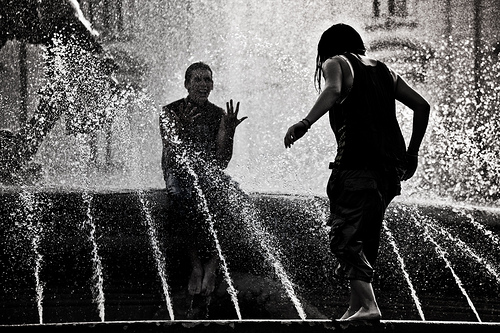 First I must learn the art of waiting. It is what we seem to do here in this Neapolitan town. We walk, and we wait. We congregate, and we wait. There is always someone missing whose presence is essential, some preordained time that has not yet arrived, some inexplicable sequence of events that must unfold. The waiting is an integral part of the experience of being here, and because I do not speak the language and cannot fill it with words nor grab hold of the ones in the air around me, I am learning to sit still and observe. I am learning to be less intimidated by idleness and uncertainty, learning to relinquish a bit of control.

In fact, I began to write this in a notebook as I sat on a bench with my Zio Pinuccio at the edge of a municipal garden by the River Sarno in Scafati. My uncle told me (I think) that this river was once an important navigation route to the sea, which made this area the site of one of the earliest settlements in Italy. He said (I think) that in the old days the river was beautiful, and that people came to fish from its banks, but now it is polluted because of factories upstream. In our stroll around the park, we have contemplated an enormous palm tree whose huge trunk is riddled with bullet holes, enjoyed the shade of tall pines and the pinks and pale purples of hydrangea in bloom, and witnessed a peacock presenting an astonishing display of feathers to an indifferent hen. A group of teenagers loiter noisily by a fountain, a young couple is kissing on a secluded bench, and an old man pedals by on a bicycle. In short, there is nothing and everything happening, and we are sitting here to wait (I think) for my cousin Luca.

I don’t mind, really. It’s nice to sit in silence next to someone you like. I only wish I had brought along a book and a bottle of water. A few minutes ago I ventured to ask (no doubt in very distorted Italian) if there might be a place nearby where I could buy something for the two of us to drink, but the meaning of this question and its profound importance to me has somehow eluded my uncle, for he brushes it off with a phrase that ends in dopo (later), and we remain true to our single purpose, which apparently is to sit here waiting. At one point I invite him to listen to some music on my iPod, and at the sound o 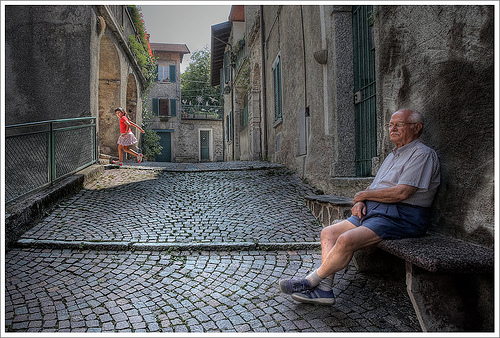 f Bach’s Goldberg Variations, he smiles, tilts his head back, closes his eyes and lets the pleasure of the music transport him. It becomes a moment I will never forget, and the Goldberg Variations will forever bring me back to it.

Zio Pinuccio’s father and my grandfather were brothers, and because he is thus a first cousin to my own father, I feel a special bond with him, and in his eyes I see something familiar and dear. His eldest son, Gianni, who speaks English, tells me this about Zio Pinuccio: “He suffers because he is an idealist about the world, and he is disappointed. He thought the world would change but it did not.”

And yet, there is no one more filled with wonder and appreciation than my uncle for beauty and art and the nobler gestures of humanity. We walk into the coolness of the church of S. Maria Vergini and he points to the graceful curves of marble decoration, the paintings on the domed ceiling, the way the light enters through an arched window. We wander slowly among the ruins of Herculaneum with Zia Titina, noticing the detail of a painted border on a wall, the precisely wrought image of a bird, the warm Pompeian reds. He navigates through the congested streets in his little green car, his hair an unruly cloud of white curls, and he points to Vesuvius looming on the horizon, and even if I could speak perfect Italian, I would not be able to find the words to tell him how much he means to me.

Here I must learn to let go of the language that moors me, and splash around in the sea of Italian. “It’s a difficult language,” admits Gianni. “So many tenses, so many nuances. English for me is crisp and clean, like programming a computer, but Italian is good for diplomacy. It leaves the listener more room for interpretation.”

I am a very verbal person in my mother tongue, but I know already that I do not have a facility for foreign languages, and it is disconcerting indeed to forfeit comprehension and the ability to communicate. I carry my trusty dizionario and a book of verb conjugations everywhere I go. I periodically retreat into my notebook to painstakingly formulate my own awkward sentences, then recite them like a child to an indulgent audience. I listen for the occasional shine of meaning in the river of talk around me, and the sounds and rhythms of Italian begin to fill my very dreams. I see now what immersion really means, and I feel lost and helpless, at times shutting down with the exhaustion of trying to maintain meaningful engagement. I will not be here long enough to even begin to attain competence, but sometimes communication happens. Sometimes the words do come. Sometimes they are not needed.

I learn, too, to ignore the clock and say yes to new experiences and adventures. If you are offered a plate of chewy sconcigli or il piede e il muso (which may well give you pause), give it a try. If it is nearly eleven on a Monday night and you are mentally ready for bed and someone proclaims it a good tim 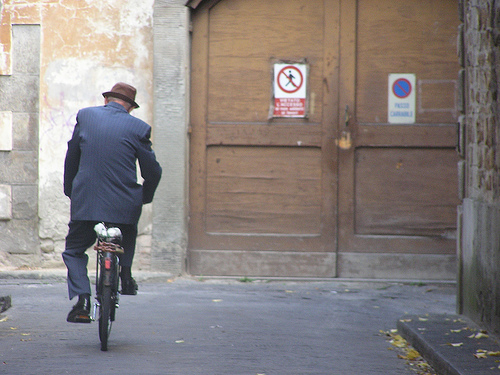 e to see Napoli by night, the best response is andiamo. Espresso at midnight? You can sleep when you’re dead. A ride with Luisa on the back of her motorcycle to an early morning market where you taste an icy lemon granita for the first time and later wait for her while she buys an octopus for dinner? Si.Â Invitations to meet distant relatives, friends of distant relatives, friends of friends of distant relatives? All wonderful and worthwhile. Hot, sweaty, bitten by mosquitoes? Deal with it. A spirit of openness and responsiveness begins to take hold, a spirit that I hope will carry over into my mundane, everyday life.

I have walked to a waterfall in the mountains above the Amalfi Coast with Luca and Maestro Vincenzo, heard Zio Mario sing an old street vendor song about zuppa di polpo (octopus soup), and drunk of the healing waters of the fountain at Castellammare di Stabia. I have been kissed and showered with love enough to last a lifetime. I will never be the same.

Which brings me to the most important thing I have learned: without taking it for granted, to gracefully accept when love is given. My grandfather left this place in 1905. Period. There is no other connection. Eighty years later I made the trip to his homeland and found these people, who might have easily and understandably dismissed me as a stranger. Instead, despite the remoteness of the connection and the barriers of language, culture, and distance, they took me into their hearts and have welcomed me each time I have returned during the past twenty-five years. No small gift, this. No small miracle.Â This is the family with whom I have had no pain, other than the sadness of saying good-bye each time. (It’s a big journey, after all.)

And it is tempting to write it all off as a fantasy or a myth, but now it has been reaffirmed. They are my kind and generous relatives, and they are funny and crazy and have their own problems and hurts and complicated lives, but they saw fit to perceive me as real and to accept me as theirs.

Days later, back in the English-speaking world, my daughter showed me a poem by Louis MacNeice, which said:

World is crazier and more of it than we think,

Incorrigibly plural. I peel and portion

A tangerine and spit the pips and feel

The drunkenness of things being various.

And I thought about the narrow Neapolitan streets with laundry hanging from the windows, and lovers on benches by the sea, and late-night gatherings at tables covered with floral cloths. I remembered the fireworks of each nightly festa, laughter and arguments in that beautiful and elusive language, theÂ familiar profile of Vesuvius through the summer haze. We cross a difficult zone to enter something different, and it changes us, and I am still a bit drunk with it all.

Cynthia Carbone Ward began life in Brooklyn, New York and now lives on a cattle ranch on California’s central coast, a fact that reaffirms her belief that life is both grand and unpredictable. She is the author of a book for teachers, How Writers Grow, published by Heinemann press in 2006, and an essayist whose work has appeared in the Santa Barbara Independent, Voices in Italian Americana, and The Brown Literary Review, among other venues. New to empty nesting and recently retired from teaching, Cynthia is still trying to figure out what shape her life should take from here, but she is hopeful it will encompass some travel and adventure. You can follow her blog at Still Amazed.