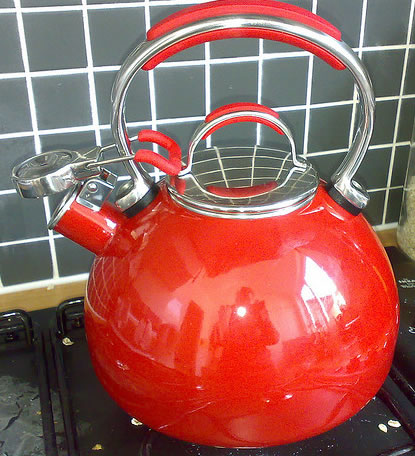 “Sarajevo is ready for tourists,” read the article in the London Times. Pictures of red roofs and snow-capped mountains leapt off the page. Bosnia had emerged from the 1990’s war and rebuilt its infrastructure, but tourists had yet to discover the country. It was time to visit.

Flying from Italy to Sarajevo, I was full of plans for exploring the city and learning about its history. My husband Ron and I had rented an apartment and planned to relax, cook our own meals and see the sights without rushing.

We landed on a hot, humid afternoon and took a cab from the airport, through miles of gritty neighborhoods. Beat-up trams clanged along their rails, cars honked and construction dust surrounded our vehicle. I longed for the ancient village we had just left behind, with its narrow lanes and buildings tumbling down to the sea. “Why did we leave Italy,” I thought, feeling like I’d been plucked from one century and put down in another.

The driver was about fifty and looked like James Garner, handsome with thick black hair and a hearty laugh. He bonded quickly with Ron in the front seat and acted as if they were old friends. Turning into a tour guide, he pointed out sights like an elegant mosque and a garish Holiday Inn, where journalists stayed while reporting on the war.Â  He showed us buildings going up to replace those bombed in the 1990’s, saying “Kaput!” and smiling broadly each time. Like a New York City cabbie, he leaned over and talked nonstop, hardly glancing at the road. I admired his positive attitude but felt too tired and nervous to enjoy the ride.

We rounded a corner and the old town appeared, with its bustling squares and bridges crossing the Miljacka River. Hillsides dotted with houses surrounded the city, with forests and mountains beyond. Tucked among the neighborhoods were small graveyards full of narrow headstones, new from the recent war.

The driver pulled up to our hostel and kept on chatting, until a young man appeared and greeted us warmly. He was the owner’s son, about 25, with dark hair and a dazzling smile. He showed us to our apartment, or to the place Ron would soon call our “so-called apartment.”

The place was newly remodeled, and the sun came in from a skylight overhead. One area had four single beds, and the other was filled with matching furniture: a couch, loveseat and armchair made of dark brown leather. But the apartment had no kitchen — not even a hot plate or a refrigerator. Not a glass, dish or utensil. No towels, soap or hangers, and of course no 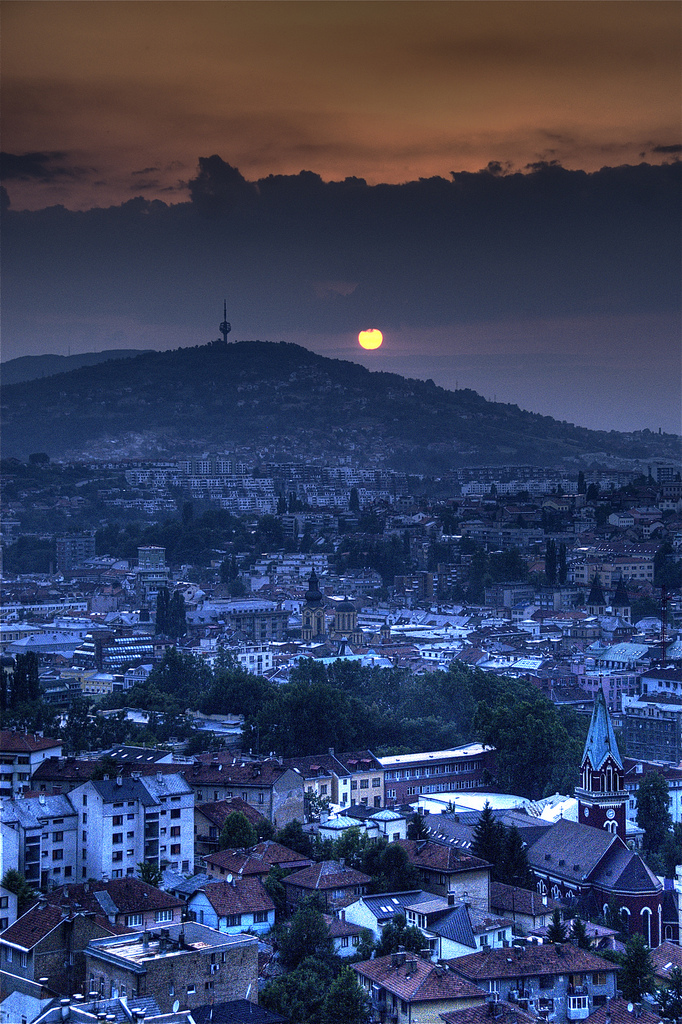 cookware. We were dumbfounded, but soon realized our hostel owner’s definition of “apartment” was different from ours. I had never asked about a kitchen yet assumed we would have one. Even after 30 years of travel, I had things to learn about renting a so-called apartment.

The towels were an oversight; when Ron requested a few, the owner’s son smacked himself on the head and delivered them in minutes. Showing off his English, he said, “Tell me if you need anything else, I will help you.”

I didn’t know where to start. “Perhaps an electric kettle?” I asked feebly.

“We do not have, but….” The young man bolted down the stairs, indicating that we should follow. He showed us the common room, thick with cigarette smoke, and gestured proudly towards a stove and a single saucepan with which we could boil water. I appreciated the gesture but couldn’t help thinking of our kitchen in Italy, where we’d linger over coffee and gaze out at the Mediterranean.

We nodded, smiled and retreated upstairs, where we sat on one of our couches and stared at each other, depressed.

“What’s the point of having an apartment if we can’t make a cup of tea?” I asked, thinking how much I could use one. I’d caught a sinus infection and could hardly breathe, though at least our rooms weren’t smoky.

“Maybe we should find another place,” said Ron.

We decided to try and make the apartment work, with a bottom line of making cereal, juice and coffee for breakfast. 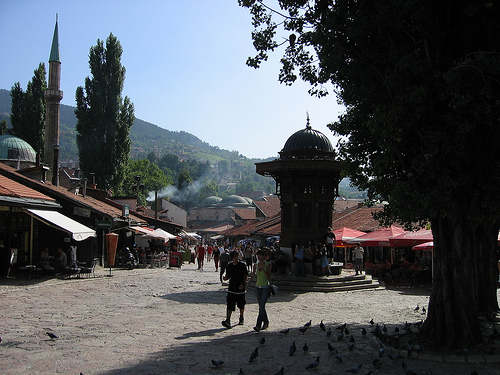 Setting out that evening, we headed for Bascarsija, or Pigeon Square, a block from our apartment in the heart of old town. People of all ages strolled along cobble-stoned streets, chatted and waved to their friends. Worshippers went in and out of mosques responding to calls for prayer, peaceful sounds coming from loudspeakers attached to the outside of minarets. Others window-shopped or sat at outside cafes, sipping tea or wine. I was struck by how relaxed they were; Muslims in simple head scarves mingled with those in miniskirts, everyone enjoying themselves.

One small square looked like an outdoor living room. Rug-covered benches lined the walls of buildings, and colorful hassocks dotted the courtyard. Locals drank tea that came from a nearby cafe, and some smoked tobacco using large, shared hookahs. Children played underneath a tree growing in the center of the square.

We pulled ourselves away from the scene and found a grocery that sold plastic plates, napkins and a dishpan, which would double as a refrigerator once I filled it with cold water. Another had apples and bananas, granola and milk, along with vodka and fresh-squeezed blood red orange juice. There, on a high shelf, was an ancient, dust-covered container holding two ceramic cups and a pound of coffee; a tall clerk leapt up and got it for us. Now all we needed was a way to boil water, though we were prepared to use hot tap water if necessary.

The best treasures came from a market we found the next day, in a building made of corrugated steel that resembled a Quonset hut. We walked into a cavernous room with 20 foot ceilings and saw dozens of stalls, most covered by tarps and abandoned at the end of the day. The place was quiet except for a few ancient carts being rolled across the bare cement floor.

Ron and I lit up when we saw a small red kettle that looked like a measuring cup with a cord. An elderly woman stood nearby, wearing a worn peasant skirt and green vest, with a thin beige scarf tied around her head. I wondered if she wore it for religious reasons or simply to keep her hair back.

Gesturing toward the pint-sized plastic pitcher, I raised my eyebrows and smiled. She dug it out quickly and held up five fingers; the item would cost 5 Bosnian Marks (BAMs), or about $3.50. Ron nodded vigorously and paid her. With that he had reached his shopping threshold and told me he’d wait outside. 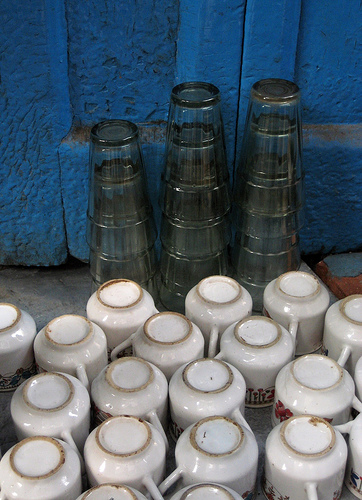 Next I pointed to a water glass, almost hidden in a different stall. The old lady took a cell phone out of her pocket and made a call, presumably to find out the price. A man drifted over, then a mother and her child. None of the four knew my language, but they all seemed determined to get me what I wanted. Finally the old woman held up four fingers. When I beamed and gave her the money, she handed me a set of three glasses. What a bargain!

Then I noticed hangers holding clothes for sale. I touched one, and the man took off a denim jacket and held it up for me. I shook my head no and tried to show I wanted hangers instead of clothes. Another woman had joined the party, and all five people leaned in, trying hard to understand me. When I pointed at all the hangers, they seemed to think I wanted all the clothes. Finally a light bulb went off in the man’s head. “Ah!” he said, dragging over a bin with hangers for sale, five for one BAM. I held up ten fingers, handed over a two-BAM coin, and emerged triumphantly to show Ron my prizes.

Breakfast the next morning featured our little red kettle boiling water for coffee. We were all set up for the next two weeks and had gotten to know our neighborhood quickly, more like locals than tourists as we ran our errands. I took pride in making the apartment work, but the more I learned about the suffering of Sarajevans during the 1990’s war, the more I wondered how we could have complained about small inconveniences.

One night our hostel owner Salem invited us into the smoky living room, and though we had vowed not to go in there, we decided to oblige. Before long our conversation turned to war, and our host described how the people of the city survived for almost four years with very little food and no electricity, gas or other services. They walked miles for a small amount of water while avoiding constant shelling and sniper fire. Yet they defied their Serbian enemies by living their lives as normally as they could. They got dressed and went to work, despite receiving no pay and dodging bullets. They fell in love, got married, had babies and held funerals, though many were shot while trying to bury their loved ones. They attended school and cultural events held in basements. And throughout the brutal war, they shared all they had with one another. Sarajevans held onto their spirit and dignity, even their sense of humor; one man told me he’d learned that burning a size 43 shoe would cook a sausage.

Salem pronounced himself “satisfied with life” because he can turn on a tap and get water. But since their country is considered unstable, Bosnians can’t get visas. Salem feels sorry for his sons, who want to travel and “meet the peoples.”Â  Ron and I understand, since travel is so important to us. And isn’t that what travel is all about — meeting the peoples of the world?

We fell in love with Sarajevo and kept the little red kettle. Now when we travel it sustains us — and reminds us of the city’s brave survivors.

Born in New York City, Jan Burak Schwert moved to Seattle 25 years ago. Â She has a Master’s degree in Human Services Administration and was an administrator at the University of Washington for over 20 years. Â Jan has traveled to more than 30 countries and likes to wake up each day not knowing what will happen.