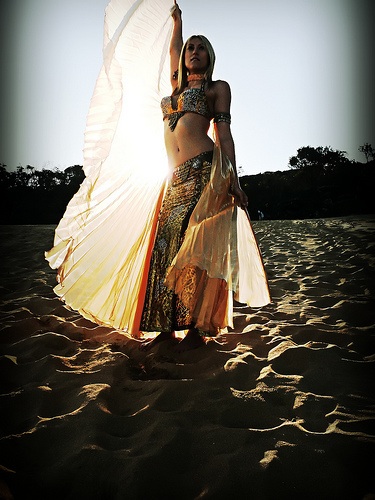 “You have to be a little eccentric to live here,” said Corinna as she welcomed us to her house. To many in the village she is more than eccentric: she is a witch. Dressed in a long black gown, her hair hidden in a headscarf, she is in no hurry to fight the rumor. When the superstitious villagers saw twenty foreign women getting off the water taxi, armed with an array of lotions and potions to fight mosquitoes and prevent sunburn, they had reason to think we had come to Vlychos to learn the secrets of witchcraft. That would have been no surprise. Learning we were here for a belly dance course was, instead, an unexpected turn.

Why a group should head to Greece for a belly dance holiday is indeed far from straightforward. The choice of location almost seems to play with history: the dance of the age-old rival, Turkey, for one week colonises the small island of Hydra, whose ships were fundamental in the war of independence from the Turks. Sarah, our teacher, explains, “You have to get away from clubs and markets if you want to learn the dance: Vlychos has no distractions.”

When I see the studio, all my historical objections crumble: we will be dancing in an amphitheatre overlooking the Aegean. “Belly dance is ultimately about stage presence, and where better to learn it than in the homeland of dramaturgy?” As Sarah speaks, a belly dancer starts to feel like a real life equivalent to Medea or Antigone.

Location Location Location
Hydra is only one and a half hours away from Athens by hydrofoil: an easy day trip after a visit to the Acropolis. Vlychos is one of its villages: fours beaches, two tavernas, 30 inhabitants. It boasts 5 churches, but has no priest. As cars and bikes are banned on the island, the only way to reach Vlychos from Hydra town is by water taxi or boat bus during the tourist season, hiking or riding a donkey during the rest of the year.

If you forget an item on your list when you go shopping in town, in Vlychos it is a serious issue. Everything needs to be shipped — even water comes in tankers from Athens. You are surrounded by it, yet Hydra suffers from a chronic shortage of water. Wednesday is the big delivery day: you will see donkeys carrying weekly supplies – even fridges and washing machines. Just imagine moving house on this island. One may think the boat bus is the lazy option to get around, until they see one in action: luggage threatens to fly into the sea, while inexperienced passengers, who have just stepped off the comfortable hydrofoil from the capital, cling to the rails as if on a rollercoaster. 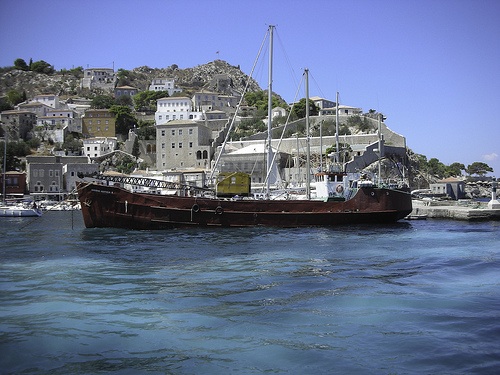 Corinna’s Irish husband did not last long in Vlychos, and left her with a young daughter and perfect English. “I had to come up with an idea. I built an extension to the house and advertised with a British agency. ‘Do you have air conditioning?’ they asked. ‘Suuure!’ I said, and hurried to have second-hand fans shipped before the season started.”

Sheets permanently hang on Corinna’s laundry line. With scorching summer temperatures they dry in minutes. But the bed-linen hides the house turned business venture from the prying eyes of nosy neighbors. She came up with a catchy name – Hydrama Arts Centre – and started renting to drama students. Corinna’s center is no holiday complex. My room has no proper windows, only a screen. In the morning your eyes open early, willingly or not, as the sun starts filtering into the room. At night, though, the sound of waves lulls you to sleep from the open window, more than making up for the early starts.

The Routine
We dance up to five hours a day in the amphitheater. Corinna’s duck and donkey preside over the lessons. Braying merges with the music we play and almost feels like an instrument in its own right, together with the accordion and the drums. We roll our shoulders, we camel sideways, we drop our hips, we shiver and shake. The elements of the dance are dissected and then put together like pieces of Ikea furniture. A two-hour workshop is devoted to two sounds only: dom and tak — the pillars of Egyptian music.

The dom and tak class is structured to prove a point, as solidly as in a dissertation. Drum beats are more than a rhythmic pattern – Â they express emotion. And to make us get the point, Sarah has us kneel at every low note – dom – and elevate and blow a kiss at every high – tak. Twenty women from 24 to 60 in respectable jobs hold hands, get on their toes and smack every time they hear a tak. Some of us have only been dancing for months, yet we take classes on entrances and exits from the stage, as if we were to perform on a boat on the Nile any time soon.

“You are a gift for the audience. Look them in the eyes and give them the present of your moves.” This is a course on how to feel like a prima donna. And it does not matter that we are learning how to become a femme fatale while wearing pyjama bottoms. You may forget how to do double hip drops, but the confidence you acquire as you dance in this amphitheatre will become your life-long souvenir from Hydra.

In the breaks between classes we go to the beach; one of the girls drums on the rocks, others improvise synchronized swimming as they repeat movements of our choreography in the sea. At the end of the season, Vlychos offers the privilege of having an empty beach all to yourself.

Lunch and dinner are at Marina’s, “The best cook in Hydra”, proclaims Corinna. As we eat on the terrace, you can peep into the kitchen, where Marina’s husband, in shorts and a white vest, eats the same meal as us, only with three times as much bread: this is true family food. 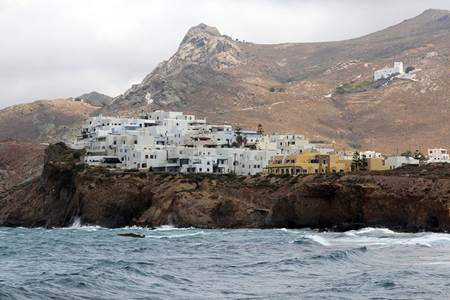 If you run out of toothpaste or just want to see new faces, the mountain track to Hydra town will feel like an escape. Jewelery shops and supermarkets, where ‘super’ refers to prices rather than size, remind you this is a town with a high density of the rich and famous. Narrow streets take you uphill where the white houses seem drowsy. There are few people but the occasional
tourist in flowery flip-flops are around. The blinding white can at times feel surreal, and I am relieved as I end up in a school courtyard, where the walls are completely covered in graffiti. Hydra has a surprising number of museums for a small island. I head to one of them and find I am not particularly interested in the exhibits, but I stand in long contemplation at the ones under the air conditioning.

The Finale
On the last night of our stay in Vlychos we perform our dances in the amphitheater. There’s a full moon shining over us, the sea as a backdrop. The whole village is invited, and it comfortably sits on the seven tiers of seats where there are a dozen people, from children to the elderly. This dance show must be the highlight of the year in Vlychos, and spectators seem to genuinely enjoy it.

We finally put away our sarongs and flip-flops; heavy make up and put our contact lenses on. Some of us are really hard to recognize. The transformation into a prima donna is complete. After our performances, the villagers hit the stage: Greek music is playing and they start dancing in circles. The enjoyment of the music is real and the dance totally spontaneous. The contrast with our belly dance performances is stark. Our carefully constructed choreographies and triumphant divas’ solos clash with the apparent simplicity of Greek steps. By the end of a kalamatianos you will have realized how deceiving this simplicity can be. The springing movements and the high speed make dancing feel almost like an Olympic discipline.

Greece seems to have invented democracy first, and then applied it to dance. Everybody knows the steps, and everybody joins in, regardless of age. With a sequined Turkish costume on, I watch English ladies with a hip scarf dance a sirtaki in a frenzy. Admittedly, you also have to be a little eccentric to spend your holidays here.