Home / WanderTales / Europe / Stumbling Through Fear on the Way To Santiago 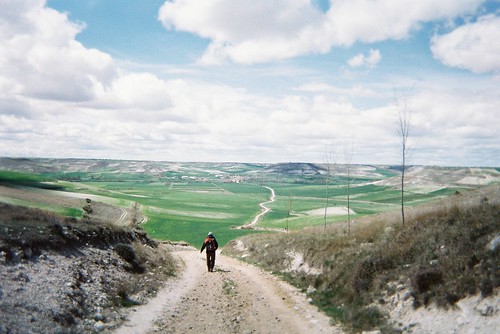 Australia is not a bad place to find out you have a fear of falling. The people are kind, and there’s plenty of beer.

Then we started climbing down.

I looked out and saw air, air, air, air, air. Then, I saw myself falling in all that air. At this point, the tour guide started to talk about workmen who fell off the bridge and survived. Asshole.

Sure I was attached to the bridge by a cable. Sure I could force my legs to move. Sure I was with a group of very nice people. Sure everyone else on the bridge learned my name before I got down. But I was certain that I was a goner.

I did make it down. After I got off the bridge, I sat on the ground for a long time. The ground was solid. The ground was where I belonged. I didn’t climb any more bridges after that. 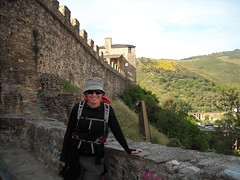 Over the next decade, I figured out my falling fear. I had no problem being on balconies or climbing up and down ladders, but I didn’t like indoor rock climbing. When I hiked the downhill bits, I sometimes paused, but I learned to talk myself down with positive affirmations like you can do it Jen and that cute guy coming up the path will not see what a big chicken you are.

Last year in early spring in St. Jean Pied de Port, France, I woke up on the top bunk in a room shared by twelve women. My plan was to walk 500 miles on the Camino Frances to Santiago de Compostela in Spain. The Camino is an old pilgrim trail recently made popular by the movie The Way and books by Shirley MacLaine and Paulo Coelho. Some folks follow the Camino for spiritual enlightenment. I just liked to walk.

That first early morning, I was jetlagged but excited. The room was dark, but the ladies were already rustling and getting ready. I crawled over to the bunk bed ladder. I tried to go down backwards. I tried to go down forwards. My feet could not find the rungs. Then, my legs froze. I broke into a sweat and my damp feet slid on the metal ladder rungs. I began breathing heavily. Then the floor faded into the darkness. Oh no. Oh no. Oh no. 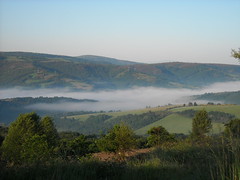 Before I had a full-on panic attack, two fortunate things happened. Someone turned on the light so I could see the floor was only five feet below me. Then, two Spanish ladies came to my aid. They placed my feet on the rungs and helped me down. Phew! I was glad that I wouldn’t become a permanent resident of the top bunk.

However, my falling problems were not over. On the first day after walking miles and miles uphill, I came to a steep and muddy downhill. Every slip and slide stiffened my legs and made me hold my breath. I wasn’t having fun. When would the fun start? Did I really want to spend a month negotiating top bunks and crawling down hills?

When I arrived at the albergue (a hostel for pilgrims) in Roncesvalles at the end of day one, I had the greatest shower of my life. All the stiff tension in me melted and flowed down the drain. I had an excellent dinner with other Camino pilgrims. I felt like I could do it. 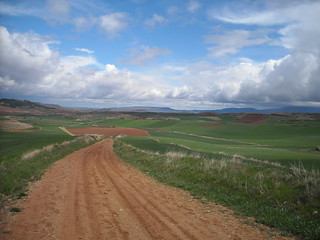 As I walked for thirty-seven days on the Camino (with a few side trips and diversions), the falling fear became less important. When I climbed up onto the top bunks, I paused and made mental notes about where exactly my hands and feet were, so I could climb down in the morning. Sometimes, I lucked out and got a bottom bunk.

The downhill walking also became easier. A fellow pilgrim told me to lean back, and that worked. I also had The Sound of Music on my mp3 player and I figured nothing bad would happen while Julie Andrews sang “My Favorite Things.”

After I arrived in Santiago de Compostela my pilgrim friends wanted to take a tour of the roof of the Cathedral. I looked up at the huge Cathedral and gulped. The roof was rather high.

However, how often is one in Santiago? 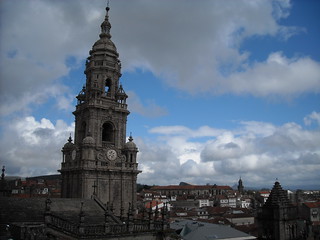 On my last day in Santiago, my Dutch buddy and I took the English language tour up to the roof. It had been raining all day, but once we were on the roof, the sun came out. We could see the city of Santiago with red roofs and green mountains in the distance, the flags of the European Union, Spain, and Galicia flying in the breeze. All of the steeples of the Cathedral rose up to meet us. It was all good.

When we came down from the roof, my Dutch buddy suggested some wine and tapas. That night, I happily ate and drank without my hand shaking. Ten years after the Sydney Harbor Bridge, I hadn’t conquered my fear of falling. I just didn’t let it stop me.