Home / WanderTales / Europe / Running with the Winos in France 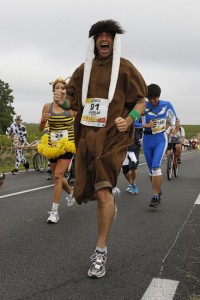 “You must cut back on your drinking if you hope to survive.”

“I’d expect that kind of talk from a doctor, life coach or even the homeless guy I give my empties to. But now, as I stagger through a vineyard wearing camouflage bootyshorts and a stolen feather boa, a man in a bee costume has just uttered those very words.

This wasn’t what I expected from my first marathon.

I am not a sophisticated drinker. On a recent wine tour of the Okanagan, I mortified my sommelier friend by chewing gum at a tasting, mixing a 2001 reserve with 7-Up, and explaining my technique for dismantling box-wine “so you can milk the bag.”

He made it quite clear that if I was to be deemed fit to sip from their spit-buckets, I needed to smarten up. So I’ve come to France to run – and drink – in the Marathon du MÃ©doc.

This bizarre race is a full-length, 42.2 kilometer marathon through Bordeaux’s vineyards with wine served to runners along the way. It’s an embarrassment of riches, including samplings from ChÃ¡teaux like Beychevelle, and Haut-Bages LibÃ©ral.

Since it was founded in 1984, theÂ Marathon du MÃ©doc has billed itself as “The World’s Longest Marathon.” With 23 wine stations, an oyster table and grilled beef served mid-race, my first thought was, “Of course, because everybody gets gout.” 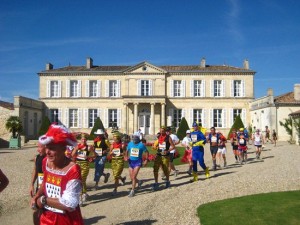 And, as if 8,500 people drinking red wine while running a marathon isn’t outrageous enough, people run theÂ Marathon du MÃ©doc in costumes. The more flamboyant the getup, the better. The theme this year is “Animals,” which the French interpret as “corsets, capes, spandex, sequins, fishnet stockings, tutus, and maybe some form of animal ears.” And those are just the men.

To symbolize my ignorant North American ways (which I hoped to shed in France), my running partner and I opted to dress as hunters.

After raiding the Dollar Store for camouflage hats, water pistols and some very realistic looking fake bullet belts, we were ready to bag some big game. I was amazed we got through customs.

On Your Mark
The race begins in Pauillac, a seaside town famous for legendary wine. Elegant stone architecture contrasts sharply with cows, zebras, nuns, jellyfish, Indians, ballerinas and Smurfs. An oom-pa-pa band playing from a marble balcony feeds the giddy, eccentric mood. I am here as an athlete and a scholar of wine, so I bust out my warm-up stretches, even though it feels more like I should be flashing people for beads.

Imagine what happens when alcohol is introduced to the mix.

At precisely 9:30 AM, the runners start counting down. 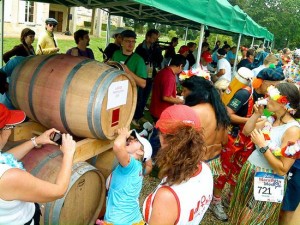 I think back to my preparation: early morning runs… wine education atÂ L’Ecole du Vin in Bordeaux drinking six whiskeys at a pub with scary biker waitresses and pulling a dine-and-dash “TROIS.”

My quads are tight and toned, my liver swollen and twitchy. I feel ready. “DEUX”

I grip my guns tightly and shout along. “UN!!!”

Spectators crane out windows as the starting gun fires. Suddenly eight thousand sins against nature spring into motion. It looks as if someone walked into a bar holding a jungle-themed aerobics class during a midnight screening of The Rocky Horror Picture Show and pulled the fire alarm.

A few minutes into our run, we stampede up to the first station, squirt guns drawn. I peer over the long wooden table expecting a bored-looking tuxedo-shirted wine steward. All I see are friendly volunteers speed-pouring into plastic cups as fast as marathoners can swig.

The race surges out of the village and into the countryside. The sides of the track are packed with beaming spectators. Grandmothers smile from lawn chairs and raise glasses of their own. Children shout, “Allez! Allez!” and a lobster galloping beside me high-fives them with his Styrofoam pincers. I attempt the unimpressed-wine-tasting-face that I had come to Europe to perfect. It is impossible in a crowd this infectious.

Two saucy leopards help each other stretch between puffs of their Gitanes. A group of Japanese Power Rangers pose for pictures in front of ChÃ¡teau Palmer, a stunning castle straight out of pre-CGI Disney. All this is starting to seem normal to me. 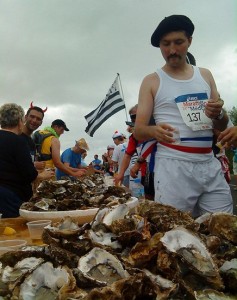 For a culture steeped in art and politics, the French sure do love plastic novelty buttocks. The things are everywhere! When I questioned a Belgian man running in cat ears and his own rosy pair of cheeks as to why, he simply replied, “Because they are hilarious!” Good enough for me.

“First prize is your body weight in wine!” chatters an American woman in a hula skirt made of corks. “Nobody is really out to break records though.” She pauses. “Well, maybe other than that Kenyan guy.” Then she wanders off the path to pee in the vines.

They’re Dropping
At the 15-kilometer marker, excess is on the rise but the crowds were otherwise peaceful. Other than a spandex-clad pig in a policeman’s hat I didn’t see a single cop (though his set of pink fake buttocks made me suspect he was not of official jurisdiction.)

Half way through the race, people are dropping all around us. Massage tents set up beside the course look more tempting with every mile. I shudder as we pass two bearded men dressed like sheep laying in a pile of discarded wigs. Seven different medic vans scream by us on the way to rescue each new endangered animal. No idea if anyone has actually died from this. Statistics on wine marathon-related deaths are sinisterly sparse.

Now the ground is covered in more animal noses than a butcher shop’s floor. My fellow hunter strips off his bullet belt as we run and hurls it into the vines. At the next tasting station I surrender my beloved guns to an adorable little boy who was eyeing them up. Hopefully he will carry on my legacy of shooting scantily clad men in inappropriate places. 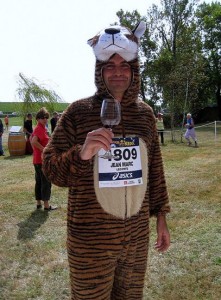 Ditching props helps, but not enough. Soon I’m picturing my parents’ reaction to hearing I’ve been found, face down in a field with French obscenities drawn all over my face.

As haggard as we are, the spectators only grow more supportive, holding sugar cubes and banana slices out toward our sweaty bedraggled carcasses.

I wracked my foggy brain for everything I had learned about pairings. Should I accept the bananas or could this be some kind of French test, landing me in ridicule once again. How could I ever hope to become a refined woman of the world now?

Then it occurred to me. French culture is famous for HOSPITALITY, not snobbery. Was snobbery just an American misinterpretation of prestige? Or maybe drinking water from my Dollar Store squirt guns had done something to my brain.

This was when the bumblebee man stepped in.

“Come! You must be strong, the finish is close.”

His wings are drooping and his nylons are torn, but damned if he isn’t having a certified blast! Up ahead I can hear people urging the runners on. 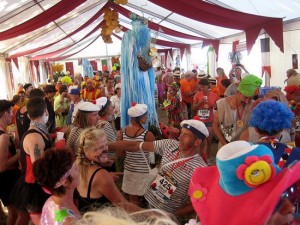 Wine is art, but it is also a social lubricant, and so should help make people feel comfortable. You can still appreciate wine, even if you don’t know the difference between a Lafite-Rothschild and a Christian Louboutin. From now on I will approach wine with the openness of French strangers cheering us from their lawn chairs.

I get up, wipe the war paint out of my eyes and follow the giant tran-sexual bee to sophistication.