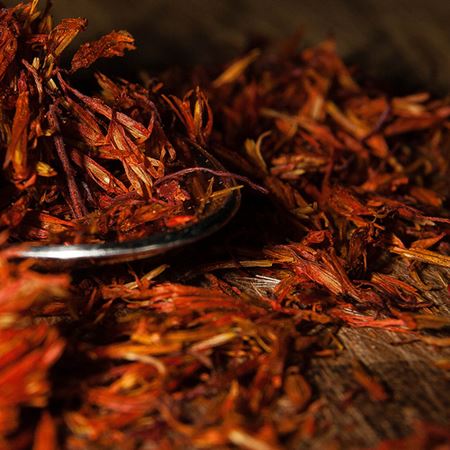 I’ve just arrived in Tuscany when the driver taking me and my friend to our hotel in the countryside interrupts. “See those towers?” he asks, pointing. “That’s San Gimignano; they call it ‘the Manhattan of the Middle Ages.'”

I can just make out a dozen or so stone structures jutting in the distance, and they do resemble skyscrapers.

Then he says something that really catches my attention: “San Gimignano is also famous for saffron.”

That sticks in mind over the next few days. We attend a harvest festival in a camera-ready hilltop hamlet, rise at dawn to spot the famous cinghiale (wild boar), slurp wines in Chianti, but still I can’t stop thinking about saffron.

One night I start Googling and learn that San Gimignano’s towers and its saffron are not isolated characteristics. The skyscrapers–at one time there were 72–were built using wealth generated from the saffron trade, which peaked in the 13th century. San Gimignano’s saffron was regarded as some of the best in the world and was at one point even used in the town as currency. Saffron production died out in the area in the 14th century, and it has only revived in the past decade or so. 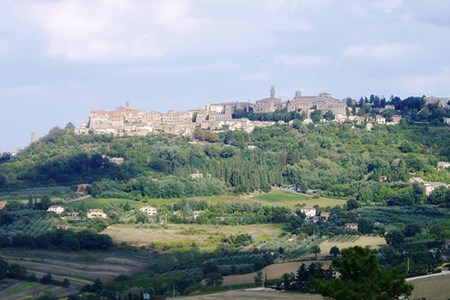 I’m ecstatic: Now I have to see this stuff in person. So the next day my friend and I borrow someone’s rental car and make the 30-minute drive toward the turrets in the distance.

As one of the best preserved medieval towns in Italy, with a walled, pedestrian-only center, San Gimignano is teeming with the tour bus set–they all must have come to score some saffron, I think. Not exactly.

At La Pecora Nera, which specializes in pecorino rounds and finocchiona sausage, I venture, “Inglese?” and the friendly shopkeep says she knows a little.

“I’m looking for lo zafferano,” I announce, trotting out the Italian term I’ve just learned.
She tells me she has some, in a one-gram jar that costs 35 euros. Did I mention saffron happens to be the world’s most expensive spice? Perhaps reading the look on my face, she says I can find a smaller package up the street. 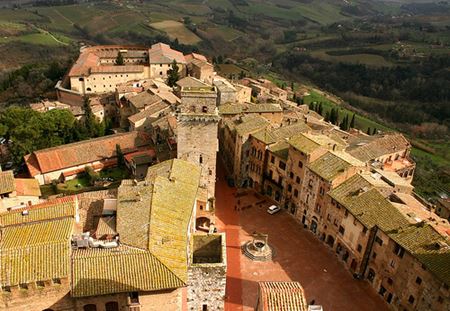 Food shops are popular on this touristed stretch, and I stop at each to inquire, in English or my terrible podcast-gleaned Italian, whether they carry lo zafferano. Every place has the stuff sequestered somewhere behind the counter, yet nowhere is there a sign proclaiming “San Gimignano’s Famous Saffron.” I start to wonder why not.

One store clerk provides part of the answer. Seeing me examine a package, with the red script and DOP (Denomination of Protected Origin) symbol I’ve seen consistently even if the name of the farm is different, he offers: “Production is very little.”

He explains, “The crocus, whose dried stigmas become the reddish strands we know, only blooms once a year in the fall.” Each flower has three stigmas, and these must be harvested by hand. So, San Gimignano may not be ready to tout its famous saffron until production increases further. 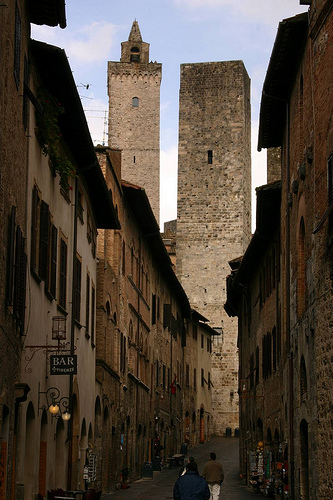 At the fifth shop, I hand over 5.50 euros for a few saffron strands, which I’m told will be “enough for four people.” There are recipes on the package for risotto and budino, but what I really want now is to taste this famous saffron in a dish prepared by an Italian cook. Despite everyone’s claim that “tutti li ristoranti” offer the specialty, I can’t seem to find a single place that mentions it on the menu.

By now it’s late afternoon and many of the regular eateries have closed for a few hours while crowds gather at cafe-bars for an aperitif. Disappointed, I conclude that I won’t taste Tuscan saffron today after all. As we give up and head to the car, I decide to ask the girl at Pecora Nera one more time, and it happens that she knows the perfect place. She writes down a restaurant name, L’Officina del cacio, explaining they make a homemade pasta in saffron sauce. By now we’re running too late for dinner to stop, and I despair I won’t have time to return later. But we make a wrong turn leaving the city, and there’s the restaurant right in front of us.

Imploring my friend to halt the car, I run inside and make a very American request: Can they do takeout? L’Officina del cacio hasn’t even opened for the night, and they’re a strictly eat-in establishment. But the owner must sense my urgency, because she agrees she can make it happen. Which is how I come to be eating the dish in the car ten minutes later. 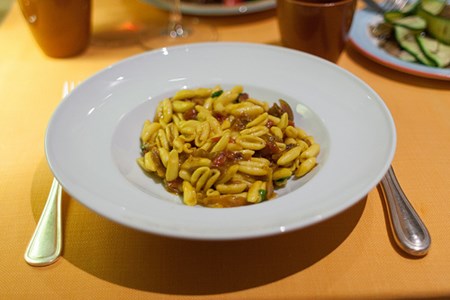 Then when we hit a bump and the whole plate goes flying, hurling my precious pasta to the rental car floor, where it lands in a goopy mess. But it’s okay. Like many before me, I’ve followed the spice route toward the towers to seek the famous saffron of San Gimignano, and I found it.

Plus there’s still that stash in my purse.