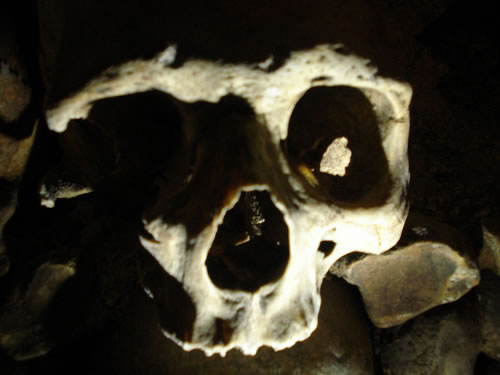 I hand my two coins to the man at the gates and step gingerly through. After descending the spiral staircase, I continue along a gritty tunnel, which darkens and narrows as it twists deeper under the earth. Finally I reach an inscription in the stone: “ArrÃªte! Cest ici l’empire de a mort”.Â  I’ve visited some pretty strange places, but the Empire of the Dead takes the biscuit.

Allow me to provide a little background, but be warned, it does get a bit gruesome. The setting is Paris, 1786. Authorities have decided to close several of the city’s cemeteries, including the largest, Les Innocents, due to “insalubrity”. This is the salubrious way of saying that the thirty generations of Parisians who inhabited the cemetery have outgrown their accommodation. In places, the churchyard is bloated up to ten meters above road-level and the boundaries are prone to bursting, spilling decomposing corpses into the surrounding streets. So gradually, under the cover of darkness, in ceremonial procession and shrouded under black veils, the bodies are transferred from various graveyards into the ancient underground quarries that honeycomb the city.

Today, an estimated 6 million former Parisians populate the warren of corridors that is subterranean Paris. They are who I am here to see.

Ignoring the warning to ‘ArrÃªte‘, I follow the tunnel as it advances into the gloom. The walls are now decorated from floor to ceiling with embroidery-like patterns. The patterns are made of human bones. Rows of carefully aligned ribs and femurs form herringbone rows, surrounding diamonds and crosses of skulls. At intervals, the bones frame stone plaques with words engraved in French. The corridors continue like this, sometimes narrow, sometimes opening into wider chambers, always with the same tapestry of human remains. There is no breeze and the stagnant air smells faintly chalky. I lick my lips reluctantly. Every so often there is an archway or gap in the wall where the display has collapsed. In the gloom behind the regimented formations, sprawls a legion in disarray. A tightly packed rubble of vertebrae and crumbled bone reinforce the decorative faÃ§ade.

There are too many signs prohibiting me from touching for me to pretend not to have noticed them…so I wait until nobody is looking before tentatively resting the tip of my finger on someone’s smooth and greenish brow. I know that this was once a person, but it is a struggle to reconcile myself to the fact. Of the millions of bodies relocated down here, none were labelled, gentry were laid alongside peasants, men, women, old and young heaped and arranged indiscriminately together. This brow could have belonged to literally anyone who lived in Paris between about 1250 and 1800. As I repeat the gesture, I imagine the reaction my prod might have had were I to step back to when she was still alive. Would she stare in disbelief at my impertinence from beneath her powdered wig, or would she hoist her filthy skirts and flee, hurling back a string of French obscenities? As I said, it is hard to equate this waxy looking skull with any realistic concept of a person. 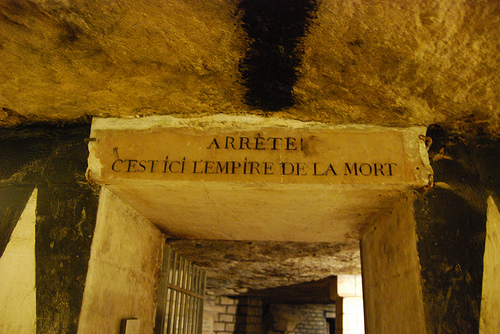 Step back to behold the whole wall of fleshless faces and femurs and the vertiginous feeling is magnified. Every one of those legs once walked the streets of Paris and every empty cranium once cradled a consciousness. I put my hand to my own forehead, unable to imagine my skull without me inside it.

The crunch of my footsteps and occasional quiet splat of water hitting damp stone seem to amplify the silence. I’ve lost track of how long I’ve been walking, but I hadn‘t imagined that even 6 million skeletons could take up this much room. I find out later that the 1.5 km of catacomb that is open to the public is only a fraction of the actual burial site. The earth beneath the city has been so burrowed into, that plans for new buildings need lengthy analysis just to check the land can support another building. And even so, every so often a little part of Paris will disappear beneath the surface.

Despite the confinement, the hollow-eyed crowds give the impression of being somewhere much bigger. It is almost a relief therefore, when I step through a bone-built archway into a smaller chamber, built around a small central pedestal. The same arrangements of bones reach up to a domed ceiling. A foreign tour group is huddled inside and, speaking in a language I don’t understand, their guide points out one skull. Between gaping sockets, the skull proudly bears the bullet hole that killed him. A neat circle, cleansed by time. The catacombs are no stranger to conflict. In the Second World War, the Germans had a bunker in the chambers beneath the LycÃ©e Montaigne, a well known high school. The complexity of the labyrinth allowed the Resistance to employ the tunnel system simultaneously in their schemes to resist the occupation. It does seem the natural setting for subterfuge and adventure, like Cluedo’s hidden passage on a grand scale. It is with hastened steps that I walk the last of the route to the exit.

Stepping out onto the glistening Paris pavement, the images behind me instantly assume an unreal quality. The eerie gloom of the underground almost instantly dissolves into something close to a dream. Without pausing, I go about the rest of my sight-seeing. I look at puppies in a pet shop window. I stop for a croissant. But all the time I remain dimly aware of those echoey vaults beneath my feet. Those 6 million dead, populating a strange shadowy city, like a grotesque twin to the city of style we know so well. As Paris glides about her daily life, the Catacombs are ever-present, stowed away from the public gaze like Dorian Gray’s portrait, and Paris is all the richer for it.

Charlotte Chester is a multi award winning writer based in York, England. Her work has been published in The Guardian, The Daily Telegraph and TNT magazine as well as in a variety of local magazines and papers. She enjoys reading, pole dancing and cake. More of her work will soon be available to view on her website.