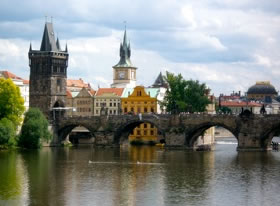 It is the last morning of our five days in Prague and I am in my transit mode. It is the morning that does not count as a real one, the morning that is entirely about being packed and ready and getting to the airport, and yet I cannot help but notice the sound of a pigeon’s wings in flight past the window above the bed, and the whiteness of the sky, and the books set upon the dresser and piled on the floor of this room in a friend’s apartment five flights up on a street called Malirska. I am aware of having stretched our welcome here by about two days – some offers, while gracious, are best declined – but our friend gives me coffee and plays Miriam Makeba singing Pata Pata, and for a moment I feel like crying because it is so sweet of him, and because I am very tired and have not been good at making sense of things lately, and because it is our last morning in Prague.

How would I begin to understand this complex place after five days spent wandering in a trance? It has been said that visiting Prague for the first time is like

watching an intricate play that demands analysis and reflection; you get more meaning if you come back and see it again. It is a city of layers and contradictions that mirror its history, a collage of disparate elements. There are Gothic, Renaissance and Baroque facades, whimsical Art Nouveau details, bleak Communist-era buildings providing mute testimony to the 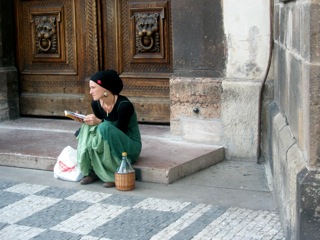 recent past, innovative modern architecture and irreverent Cerny-esque surprises. There are scenic overviews in fairy tale settings, magnificent historic districts and tattered neighborhoods tagged with spray paint. Two men on a street corner lean into conversation, cigarette smoke swirling around their pallid faces; a beautiful girl with hair dyed bright ginger sails by on roller blades; an old woman with swollen ankles carries a poodle in a basket on the metro.Â “Oh, how I love Prague!” writes a girlfriend in an email sent from California. “Don’t you feel like you are in Dreamland?” I do, but it is the land of a dream in which things are not what they seem, a shape-shifting dream, a dream that stays with you long past waking and alters your perspective all day. 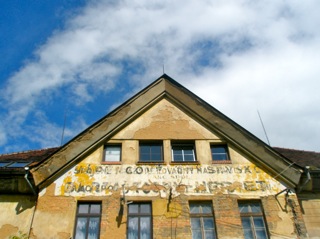 I view everything here through a veil of ambiguity. The language is unfamiliar, the rhythm of the city difficult to sense, the reality impossible to know. We have attempted to prepare ourselves by reading about the area and its history, but perhaps that has overly influenced what I perceive now. Is there indeed a residue of guardedness and disillusionment, or is that just the way it looks to two American tourists with only the most superficial opportunities and means to communicate?Â We depend upon our Czech-speaking friend for interaction and transaction, and although this facilitates our exploration immeasurably maybe we also become a bit lazy and passive. Rather than participate, we watch. On our own we exchange a few words with waiters, a clerk in a bookshop, a fellow passenger on a train to Beroun, the mother of a charming little girl in a bakery near our friend’s house. (“Go ahead and say hello to her,” says the mother. “Her father is Finnish, but my boyfriend is from Britain, so she hears English all the time.”) Mostly we are an anonymous audience in the back of the theater, observing.

It is a place not known for its culinary arts. (“I have had some fine meals [in Prague] over the years,” writes John Banville in Prague Pictures. “In general, however, it must be said, and I must say it, that the Czech cuisine is, well, no better than that of Bavaria, which statement is, 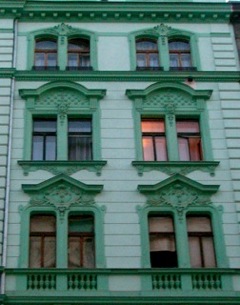 as anyone who knows Bavaria will confirm, a ringing denunciation.”) My best meal turns out to be pork loin from the CafÃ© Louvre, an elegant restaurant on Narodni Street that opened its doors in 1902 and strives to retain its Old World ambiance. The meat was juicy, slightly pink inside, and seasoned subtly with mustard and sweet red cabbage, leading me to conclude that pork would generally be a good choice. On an afternoon when we went by train to Krivoklat near the Berounka River valley, we ate at the Restaurant Sykora, where the menu was entirely in Czech, and I ordered a dish that featured veprova pecinka, but it was a more desiccated version of pork, teamed with houskovy knedlik, those infamous white bread dumplings that seem designed to fill the empty space in one’s belly like an infusion of caulking. The pleasant atmosphere more than compensated; we sat outdoors with a handful of hikers, not far from the river, the Krivoklat Castle, and a cluster of charmingly shabby buildings adjacent to the forest, and even my Coke was served to me in an old-fashioned glass. (I do not drink beer, which is unfortunate, for this is a region where beer is subsidized and actually cheaper than water in a restaurant.)

Our meanderings include meals and pauses at casually hip coffee shops, a Spanish-style tapas place, an Irish pub, a sophisticated cafÃ© in the Black Madonna House above the Museum of Czech Cubism and a smoke-filled and unpretentiously working class bar. The best snacks of our time in Prague: blackberries and fresh pineapple from a Vietnamese market, and kolaches from a neighborhood place I thought was called CukrÃ¡rna, but I only just discovered that’s the generic word for bakery. 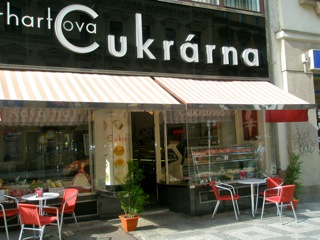 Our friend provides several whirlwind tours replete with stories that I wish I had written down, and we traipse everywhere, from morning to night, seeing the city from every angle, in every kind of light.Â We wander through the Castle Quarter, Mala Strana, Old Town and NovÃ© Mesto. We walk across the Charles Bridge with all the other tourists and make sure to watch the spectacle of the Town Hall clock when it strikes on the hour. We enter the imposing St. Vitus Cathedral and the tranquil St. Agnes Convent, where an exquisite collection of medieval art has been collected from all over Bohemia and Central Europe. We see the famous “Fred and Ginger” building designed by Frank Gehry, the statue of St. Wenceslas on his upright horse (andÂ another on his upside-down horse, courtesy of David Cerny), parks, monuments, memorial shrines. But in addition to the must-see landmarks, we go to the Botanicka Zahrada on a rainy day and stroll through fragrant jungles that are humid and warm and we take a train to Srbsko where we enter a church built into a limestone cave at the site of a sacred spring and walk to the top of a mountain.

At the same time we talk with our friend about the tiny coastal California town that is our common ground, and interests we share, and odd connections. It’s funny to be in the Czech Republic talking about these things, but sometimes Prague is about the 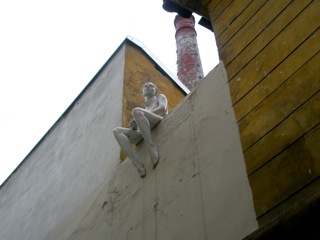 flickering light of who someone is or is not, the permutations of identity, the sense of being no one when taken out of context.Â The soundtrack in my mind now is Tara Fuki, a female duo of classically trained cellists and vocalists that we listened to in our friend’s apartment; the music is haunting and lovely, though I don’t know what it means.

“When I seek another word for mystery,” writes Angelo Maria Ripellino, “the only word I can find is Prague.”

Maybe our friend was pulling our leg, but he said that if I touched the toe of a certain statue I would one day return to Prague, so I did, and I hope it works.

Cynthia Carbone Ward began life in Brooklyn, New York and now lives on a cattle ranch on California’s central coast, a fact that reaffirms her belief that life is both grand and unpredictable. She is the author of a book for teachers, How Writers Grow, published by Heinemann press in 2006, and an essayist whose work has appeared in the Santa Barbara Independent, Voices in Italian Americana, and The Brown Literary Review, among other venues. New to empty nesting and recently retired from teaching, Cynthia is still trying to figure out what shape her life should take from here, but she is hopeful it will encompass some travel and adventure. You can follow her blog at Still Amazed.