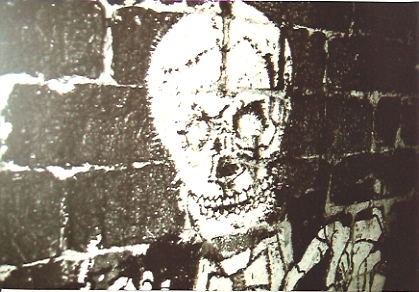 Some come to Paris for the The Louvre, The Eiffel Tower, some for the food and wine, but this time I came, strictly for the BONES, those belonging to the more than 6 million French men and woman who were deposited in the caves and tunnels of the Catacombs, twisting some 300 kilometers or 40% under the streets of Paris.

The Catacombs began under Roman occupation in 60 B.C. as limestone quarries to build the city. In the 1100’s, King Phillippe-Auguste ordered tunneling and mining to further increase the ramparts around Paris for protection. That began centuries of reckless tunneling over 80 ft. under ground.

By 1786, Paris had a desperate problem with their dead. The cemeteries were overloaded and smelling. The ground was bulging up 10 to 20 ft. with dead bodies, sometimes, breaking out and rolling down the streets, causing horrendous disease and mayhem. It was decided to move the bodies into the Catacombs. Priests rolled wooden carts filled with the dead in the middle of the night, offering prayers as they progressed to secret openings in the ground. It took 15 months to complete the process. It is believed that the bones of Robespierre, Rabelais, Pascal and Madame de Pompadour along with many of the French elite are in those Catacombs. As the years went by, more cemeteries joined in the bone removal. Later, King Charles X even threw grand parties in some of the large subterranean galleries.

Over the years, the Catacombs have been commissioned as hideouts for the religious, the criminal, Hitler’s soldiers and France’s Resistance Fighters. In more recent years, it has been used for illegally growing mushrooms and storing potatoes and beer. 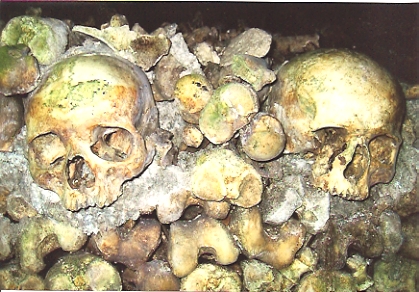 I arrived on a cold morning this spring, armed with a warm coat and a flashlight, excited to begin my 1.7 kilometer excursion into the underground. I counted each one of the 130 steps of the stone spiral staircase as I descended 20 meters down, deeper than the Metro. Then I began walking along a tunnel, the floor covered in wet gravel. The sounds of my steps soon became like fingers on a chalkboard, and after what seemed like a trip into the land of the dead, I began to wish that I had brought a croissant to drop crumbs from in order to find my way back.

Finally, I came to a chamber with a sign above it that translated to say, “This is the Empire of the Dead. Stop.” I inched my way into a cavity that was lit by yellow spotlights. There were piles of bones: tibiae, fibulae, skulls with sad empty eye sockets. As I walked on, I was interested that sometimes the stacking of the bones was done very symmetrically, almost artistically, with femurs placed to give the feeling of wheel spokes, accented by the occasional skull. At other times, they were just heaped in disorganized piles. But, all of them were within reach, no guardrails or Plexiglas barriers. I was temped to touch but remembered the sign, warning all not to. No need to worry about anyone stealing anything. The perceived moral punishment would be too great, and the air itself was permeated with a respectful silence, only disturbed by the occasional drip from the ceiling, as if someone above was crying.

In one chamber rested a concrete sarcophagus with an alter with these translated words: “Man, like a flower of the field flourishes while the breath is in him, and does not remain nor know longer his own place. In peaceful sleep, rest great people.” It was hard to believe that while almost 3 million people live in Paris above the ground, 6 million live below it.

At the end of my one mile journey, coming up into the warm light of a quaint Parisian street, I realized that I was grateful to have gone in and even more grateful to have come out. Somehow, my visit to the underground had jump-started my senses. The sky seemed brighter, the people nicer, and I was consumed with an intense desire for a glass of French wine and an apple tart.

Susan has been a travel writer for several years. Her motto is, “Have laptop. Will travel.” Her articles have been published in newspapers, magazines and on Internet sites. Also, her poetry has appeared in magazines, anthologies, greeting cards, two art exhibits, a calendar, a cruise brochure and on fortune cookies and NPR Radio. With her writing partner, Susan Dawson, she has published a seven book series of children’s books on healthy eating, and has received ten awards in writing.