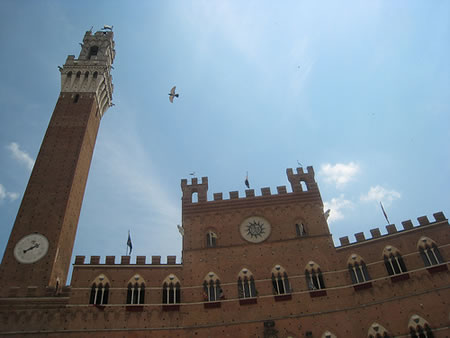 It all started out as an ordinary day, much like any other Sunday, but ended with weeping in the streets of Siena.

Let’s start from the beginning, shall we? After a fun Saturday evening, celebrating a friend’s birthday at his orto, I seized the chance to sleep in on Sunday. When I finally got around to rolling out of bed at 11:00 a.m., I checked the train schedule and settled on the 12:45 p.m. train. I would leave from Pontedera and change in Empoli before heading on to my final destination — Il Palio in Siena!

Having just recently finished reading Too Much Tuscan Sun by Dario Castagno, I was vaguely familiar with the concept of Il Palio, a horse race held twice each year on July 2 and August 16 in Siena. Seventeen Contrada (neighborhoods/regions), each identified by bizarre mascots such as Bruco (caterpillar), Giraffa (giraffe) and Istrice (porcupine), all hope to earn one of ten spots in the race where they compete for Il Palio flag. While the flag is the tangible reward, from what I witnessed, bragging rights are the more coveted prize.

I made it in to Siena without any trouble. From what I read online, more than 75,000 people flock to the city for this annual event. I was expecting a crowded train ride, but I easily found a seat and read my latest pink covered, summer book the entire ride. Even after I got off the train and made my way to a bus that took me to the city center, I still found myself wondering where everyone was. It didn’t take me long to hear some commotion in the distance though. Following Rick Steve’s instructions, I headed towards the medieval drumming.

As I got closer to the Duomo, I saw more flags representing various Contrada. As I was 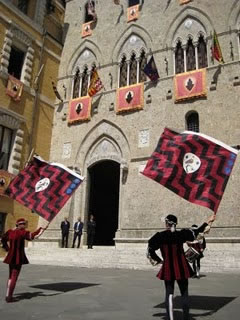 minding my own business, admiring a small square tucked out of the way, a procession of Civetta (little owl) flag bearers and supporters paraded in. I lucked out with a prime, front row spot for the display and watched the Civetta toss their flags in to the air and listened to them chant their team song. As it turns out, the Civetta horse and jockey would go on to win the race later that evening! I was in the midst of celebrity and didn’t even realize it.

I followed the Civetta crowd the rest of the way to the Duomo where I met up with a group of friends from Camp Darby. Thank goodness for the one guy in the group who had the foresight to wear a red and white striped shirt. He stood out in the crowd of thousands and it literally became a game of Where’s Waldo?

We spent a long time in front of the Duomo watching the pageant, each team processing in to the square, banging drums and hurling their Contrada flags as high in the air as is humanly possible. After each team had their turn, the group of already sweaty Americans made our way towards Il Campo, the square where the race is held. Internet reports vary, but I’ve read anywhere from 15,000 to 75,000 people cram in to Il Campo every year to witness the 90- second race. We staked out our spots by the start/finish line around 4:30 p.m., and by the time the square was sealed off (the race track encircles the square — after 5:30 p.m. no one can come or go as you would have to traipse across the track) it certainly felt like I was surrounded by 75,000 people.

At 7:00 on the dot (impressive for anything in Italy to start on time!) a big cart, pulled by two ox, entered the square and made its way around the track, displaying the Il Palio flag that would soon belong to the victors. Shortly thereafter, the horses and their riders entered the square and the announcer drew their positions. 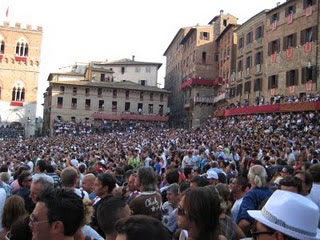 I’m still a little fuzzy on the details, but the way I understand the rules are this: each horse lines up in order, from first to last. The last horse hangs in the back, while the other horses all vie for a spot in the front. In order to get in these positions, the horses’ riders are not above punching, kicking, screaming and spitting at their opponents. Especially if said opponent is from an enemy Contrada. Any time a horse other than the very last one in the back crosses the start line, it is considered a false start and everyone has to line up again. Thus, more kicking, hitting, yelling, etc. ensues. It took an hour and a half for the 90-second race to begin. Let me repeat that for those of you who might just be glazing over my story at this point…

It took an hour and a half. We had already been standing in the square for three hours. All for a 90-second race.

All the while, the crowd is taunting their enemy Contrada, yelling out abuses such as, “You stupid Giraffe! You ruined the start.” Or, “Drop out now you horrible Snail. The Goose will never let you win!” During the race, two jockeys were thrown from their horses at particularly treacherous turns in the Piazza. The horses finished the race without their riders, not an uncommon occurrence. In fact, the passionate Italian gentleman (his Contrada was not even racing, he was just there to make sure his enemy, the Leocorno [unicorn] did not win) behind us, informed me that several years ago, the winning horse did so after he bucked his rider off during the first lap around the track.

Once the race began, it was over in a flash and the Civetta was victorious. Spectators rushed the track, screaming and yelling. My group, on the other hand, ran as far away from the piazza as possible, as quickly as possible, but not before getting caught up in the celebration and squished against the racetrack fence first. 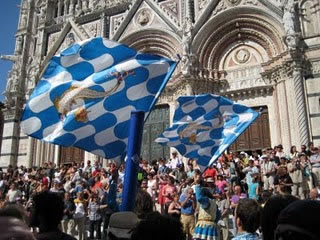 The Civetta celebration continued in the streets for the victors as they paraded their prize, Il Palio flag down the winding roads of Siena, but even more intriguing was the reaction of the losers. Grown men sobbed and wept. For me, Il Palio was an exciting way to spend a Sunday afternoon/evening, but for the Italian locals in the audience, I realized Il Palio is an event rooted in rich traditions and deep history. The race itself dates back to the 16th Century. After experiencing the energy and electricity in the piazza, I can tell why it would be so easy to get so caught up in the results of the amazing Il Palio.

Next year, I’m rooting for Capitana dell’ Onda, not because of any real allegiance to the neighborhood, but because I think their flag is super cute!